They tell me there are no available houses in Laxsjo at the moment (the house they live in was already in the family), but when there are, the prices are very good. One neighbor’s house, a 1,000-square-foot property, was purchased for an unbelievable $17,000 five years ago. The grandest house in the village, a huge, two-story 4,300-square-foot place, went for under $100,000. Still, they say it’s rare to see anyone move here who doesn’t have some kind of family connection with the area.

From Laxsjo I continued northward, six hours’ drive or so to Norrbotten, Sweden’s northernmost and largest county (it’s about the size of Austria). The spring-winter weather meant melting ice and snow. That made for some interesting driving, especially when one of hundreds of trucks laden with timber sprayed the car in a hair-raising and momentarily blinding ice bath. The best parts of the drive were on the smaller roads, where I didn’t see another car or person for miles. The air seemed to be the crispest, cleanest air you could ever breathe. At one point, there was a quaint and utterly quiet village with an icy river flowing through it. A full moon rose above the pines, just as the sunset had begun to cast the sky in pinks and soft blues. A black ripa, or capercaillie, one of the largest birds found in the region, fluttered across the road and landed high up in a tree.

Pitea is an industry town of about 25,000 people on the Norrbotten coast. It is an industry town, and the road in is lined with freight trains loaded with logs, imposing factory complexes and trucks headed in every direction. The paper mill dominates the skyline. In many ways it’s a typical northern Swedish city, stark and hard-edged and quiet in winter. And yet spending some time here yields surprises. In the small downtown a new high-rise hotel called Kust looks like something out of a much bigger city and has a well-regarded restaurant and rooftop bar up top. Pitea is also home to the highly-regarded Academy of Music. The Studio Acusticum Concert Hall adjacent to it is renowned especially because of its advanced organ, built at a cost of over $5 million. It has a chamber orchestra and an opera.

Johanna Brandstrom grew up in Pitea but moved to Stockholm along with most of her friends when they finished school. It was when she had children that she started to think about moving back. She eventually bought a 2,700-square-foot house in a quiet suburb, its wood cladding painted in classic Swedish “Falun red,” for about $150,000. In Stockholm you’d have a hard time finding a studio apartment in an unattractive suburb for that price.

Standing in her pleasant, open kitchen, Ms. Brandstrom, who used to be a hairdresser but is now studying digital marketing at a school in Pitea, pointed out that while life is very nice up here, people should be aware of the darkness. “I think you can panic when you come here,” she said with a smile. 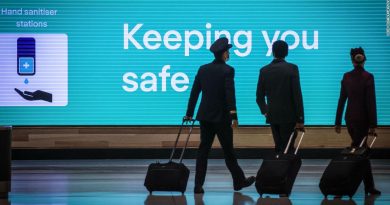 In Australia and Taiwan’s fight against Covid, flight crews are proving to be their Achilles heel