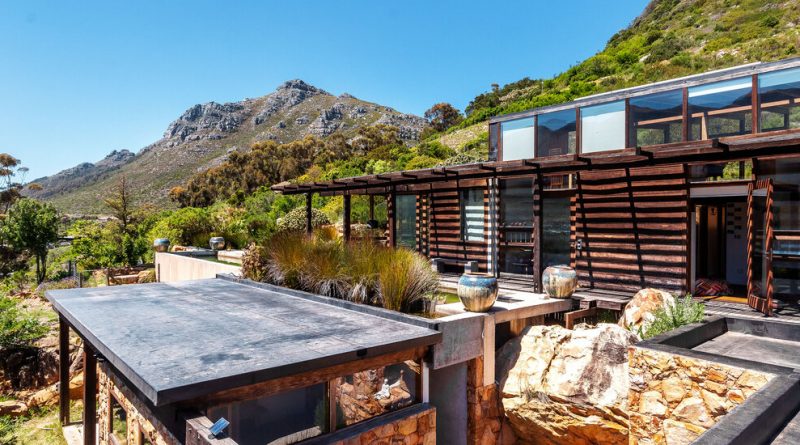 Four Bedrooms and a Lap Pool in Hout Bay

This four-bedroom house sits at the foot of the Skoorsteenberg peaks in Hout Bay, a coastal suburb of Cape Town, South Africa, where hikers and mountain climbers flock for views of the valley below and the Atlantic Ocean on the horizon.

Completed in 2015, the 4,300-square-foot house is set on a 2.7-acre lot blanketed in leafy hillside vegetation and craggy mountain rock. The current owner enlisted a friend to custom-design a structure that is enveloped in the surrounding nature, with panoramic views of the topography to be enjoyed from the slatted wood roof, the pool and koi pond, and the floor-to-ceiling, double-glazed windows.

“The house is designed in such a way that you never walk into dead space,” said Suzette Wrankmore, an agent with Greeff Properties, an affiliate of Christie’s International Real Estate, which has the listing. “If you’re going down a passage, there isn’t anything blocking your view.”

The ground floor, nestled against the sloping mountain, was largely constructed from sand-colored stone sourced directly from the lot. Also on the ground floor are a single-car garage with room for storage and a guesthouse that isn’t fully built out.

Most of the living spaces are in an elongated, single-story section of the house. A large rock, natural to the site, is embedded between the ground floor and second floor, peeking out of the open-air entrance. The mass of the house was built with moon-phase harvested local pine, an ancient technique wherein the trees are chopped down during their hibernation period, when sap supply is running low, which removes the need for chemicals to dry the wood and improves durability.

Sustainable materials can be found throughout the house. The slatted beam-and-post structure that covers the wraparound deck was assembled with dark Iroko timber from West Africa. An array of solar panels also lines the roof, used for heating.

The eco-friendly materials have helped keep the house young, Mrs. Wrankmore said: “It hasn’t dated at all.”

An open-plan kitchen, dining table and lounge space take up half of the second floor, with a narrow hall leading to three bedrooms on the other side. The front-facing rooms have sliding glass doors that open onto the deck, the 66-foot lap pool and the 269-square-foot koi pond. The pool uses biological filtration to clean itself.

The main bedroom, at the end of the house, has a bathtub and shower right next to the bed. Another full bathroom is on this level. Upstairs on the third floor, a double-height loft with cutouts in the floor offers space for another bed, a study and an entertainment area.

Hout Bay, a fishing and surfing village separated from Cape Town by Table Mountain National Park, is a 25-minute drive from Cape Town, the legislative capital of South Africa and home to a bustling summer tourism season. At the base of the Sentinel, a dramatic peak at the western mouth of Hout Bay, is the site of the world-famous Dungeons, South Africa’s most extreme surfing spot. Cape Town International Airport is a 30-minute drive from the house.

When the coronavirus arrived in the spring, South Africa’s housing price index had already been falling steadily from a post-global-recession peak in 2014, due in part to a drought that hobbled the economy for years. The pandemic accelerated that decline, with May’s 0.7 percent rate of growth the lowest in a decade, according to a November report from the First National Bank of South Africa.

The value of residential buildings fell a staggering 61.8 percent from January to September of 2020 from the same period in 2019, according to South Africa’s official statistics office.

But the price index has begun to tick upward again, leading the First National Bank to surmise that the pandemic hasn’t damaged the housing market as much as initially feared. A dramatic reduction in interest rates and transfer duties has incentivized renters to buy homes, leading to a rise in demand and a better price for sellers. “Application volumes are approximately 9 percent above the same period in 2019,” the report notes. “However, approvals lag as lenders apply caution amid an uncertain economic outlook.”

Domestic buyers who curtailed their usual winter travel plans have been more active in the market in 2020, according to several agents. And the national bank reports that
“lower-priced properties are performing better” across the country.

“We’ve dealt with a lot of price corrections over the last year or so,” said Dion Oliveira, an agent with Knight Frank South Africa. “Right now, though, they’re very competitive.”

The health crisis has also shifted buying habits among locals, with a pre-pandemic preference for compact homes giving way to a demand for more space, both indoors and out.

“Before, people wanted to live in apartment buildings because they are such low-maintenance,” said Arnold Maritz, an agent with Lew Geffen Sotheby’s International Realty. “But now they want free-standing homes. You wouldn’t have expected to see that in 2020.”

With the busy summer season approaching — when real estate in the Western Cape is typically explored by curious tourists — agents seem pleased with the state of prices in the region, but they aren’t getting their hopes up about the reality of recovering from a global pandemic.

“I’m gently optimistic about next year,” said Tim Greeff, a broker at Greeff Christie’s International Real Estate. ‘I don’t think it’ll be an incredible year or a complete seller’s market.”

This year, the average single-story family home in Hout Bay sold for about 4.25 million South African rand ($290,000), according to PropStats, a popular sales database used by agents in South Africa. On the higher end, homes in this category sold for about 9.5 million rand ($645,000). Only three homes sold in Hout Bay in November, compared with nine during November last year.

Who Buys in South Africa

Western Europeans have long been a regular presence in the real estate market in the Western Cape, a province with about 7 million residents in the southwestern corner of the country. British buyers once led the pack, but their numbers have receded since Britain announced its exit from the European Union, said Paul Turner, a license partner and owner at Engel & Völkers, in Cape Town.

Instead, he’s seen an uptick in the number of Germans interested in buying properties in the province. Eastern Europeans, Scandinavians, Italians, French and Spanish buyers also have made inquiries. The biggest sale Mr. Turner has made all year, though, was to an American. Last December, United Airlines began offering direct flights to Cape Town from New York several times a week, boosting interest from the U.S.

Mr. Maritz said that at least 40 percent of foreign buyers buy along South Africa’s Atlantic coast. “Cape Town is so popular because of the weather and our prices that are dirt cheap compared to our counterparts like Australia,” he said.

But the pandemic has sapped foreign demand, Mr. Oliveira said. In Hout Bay, around 15 percent of his clients were international buyers. Now it’s 5 percent, some of whom have bought sight unseen.

There are no restrictions on buying property as a foreigner in South Africa, although nonresident lenders may only borrow up to 50 percent of a home’s purchase price from a South African bank. Typically, buyers must put down 10 percent up front, Mr. Turner said, but it can be more.

Overall, the process is fairly simple, he said: “People have walked into our offices while on holiday and bought a house before they got on the plane to return home.”

Every buyer in South Africa must go through the same property transfer process, which includes the use of a conveyance lawyer who is usually selected by the seller but paid for by the buyer. They handle everything from acquiring new mortgage bonds, getting transfer documents signed and notarized, and registering the transaction.

Foreign homeowners must open a local bank account to pay mortgage bonds and receive short-term rental income, which will be subject to an income tax.

A one-time transfer duty is charged on a sliding scale according to a property’s value, up to 13 percent on a property worth over 11 million rand ($747,000). Additional fees include the lawyer’s conveyance fee, the registration fee and a 15 percent value-added tax. The Evolving Travel ‘Experience’: Virtual, Actual and In Between

In Indonesia, a Blurred Boundary Between the Living and the Dead