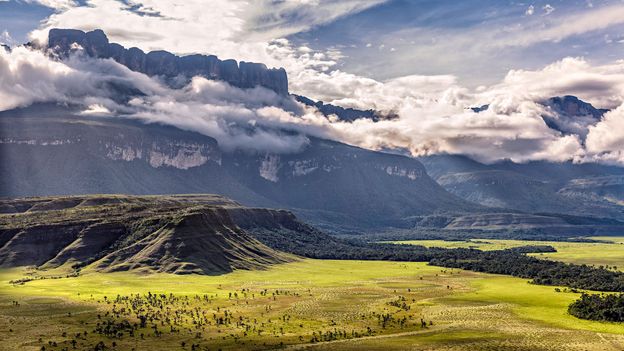 For one of Venezuela’s remote indigenous communities, sustainability trumps material gain. Amid the nation’s ongoing economic and political crisis, the Pemón village of Santa Teresita de Kavanayén (commonly called Kavanayén) has rejected profitable offers to sell its land to mining companies. Instead, villagers are preserving their centuries-old agricultural practices of planting crops on small plots of cleared forest.

The Pemón are an indigenous group residing in parts of Brazil, Guyana and south-eastern Venezuela – including the Gran Sabana, a lush area of vast green plains dotted with spectacular table mountains, where Kavanayén is located. The Gran Sabana covers more than 31,000sq km and is home to immense savannahs and endemic wildlife such as the long-tailed Hispaniolan lizard-cuckoo and the pint-sized rufous-breasted sabrewing hummingbird. It also encompasses the Canaima National Park, where the world’s highest waterfall, Angel Falls, is located.

The region’s Pemón communities came together almost 15 years ago to set up a successful tourism initiative showcasing the area’s local culture and sweeping natural landscapes to visitors. While their cooperative encouraged tourism for several years, Venezuela’s escalating political and economic crisis has led to a halt in incoming visitors in recent years, leaving the Pemón with no income.

Rather than selling off their land to mining companies, Kavanayén’s Pemón have dedicated themselves to growing their conucos, or small farms, using the same sustainable agricultural methods as their forefathers. When Argentine photographer Federico Cabrera, whose work highlights indigenous people and their lands, came across the remote Kavanayén village during his journey cycling around Venezuela in early 2020, he photographed its farmers and families as a way to highlight their forest “rebellion” and dedication to environmental responsibility.

The Pemón’s communitarian, traditional agriculture practice is not only good for the environment, it also benefits future generations. By rejecting short-term capital and caring for their land, Kavanayén villagers are keeping Pemón traditions alive.

This video is part of BBC Reel’s Secret Worlds playlist. Locked Up in a Hotel for a Year, Then a Sudden Taste of Freedom