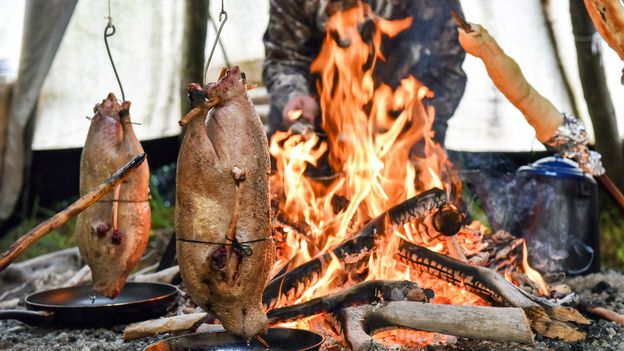 Growing up alongside moose, bear and the more than 4,000 lakes dotting Canada’s Parc de la Vérendrye wildlife reserve in Quebec, Marie-Cecile Nottaway knew that, like other members of the Algonquin First Nation, she had to catch her food before she could cook it.

“Because when we had to stay home during Covid-19 and there was neither work nor school, I was finally able to go sugar-bushing [in Quebec’s Parc de la Vérendrye] with my daughter for the entire season – making pikoodinigan for four or five weeks.” – Marie-Cecile Nottaway, chef

At eight years old, she was already a proficient hunter who could set rabbit snares by herself. “I’d put my snowshoes on in the morning and do my 2 or 3km trek to set them up,” she said. “Then the next day, I’d go over my tracks again and bring back a couple of rabbits!”

She knew how to clean her catch, too. And as she carved into the animal, she chose to whom in her family she would bequeath the rabbit head, which was considered a delicacy. “I would give it to a relative who was nice to me,” Nottaway said. After she cut up the meat, she would watch her Kokom (grandmother) cook it into a rabbit stew on the open fire behind her shack. “Once it was tender, we’d add potatoes and then mix some batter to make dumplings,” she recalled. The meal had to be big enough to feed her entire family – more than a dozen people.

Her Kokom cooked other game that Nottaway’s family hunted – moose, deer or beaver, which Nottaway said tasted of water and earth. She made treats, too, like a maple-sap toffee called pikoodinigan in Algonquin. You could only make pikoodinigan in early spring, when trees swelled with sap. Her Kokom would pack some cast-iron pots and aluminium sheet pans, trek a few kilometres to a swath of maple trees, pitch a tent or build a small shack, and settle there for a month to do “sugar-bushing”. She would draw the maple sap, cook it into a thick, sweet goo over an open fire, stirring vigorously, and then pour it onto the pans to congeal into crunchy, mahogany-coloured toffee.

“Ashee kéygat,” she would yell at the kids running around, salivating at the sweet-smelling treats. “That meant ‘it’s almost ready’, so we knew to get out of the way because the pot was hot,” Nottaway explained.

The sugar-bushing season is one of Nottaway’s favourite memories. After her Kokom had made enough toffee for a year, she’d thank the trees for nourishing her family, tell the kids to do the same and head back to her shack.

Shadowing her Kokom, Nottaway started cooking early, but she never thought she would be an award-winning chef. Now, she holds five prizes – including the Ottawa Rising Stars Award and the Young Entrepreneurs Award of Quebec – while staying true to her roots. For her, eating and cooking in a traditional Algonquin way is a way of remembering and preserving her history and culture.

“I continue to eat the traditional foods because this is who I am,” she said.

Today, Nottaway represents a growing number of Canadian Indigenous chefs diligently preserving and restoring their familial recipes and food traditions – a movement that’s part of a broader cultural reconciliation between Canadians of European descent and First Nations peoples whose ancestors were displaced centuries ago.

“The rise of Indigenous chefs and cuisine is a critical sign and part of reconciliation,” said historian Lenore Newman at the University of the Fraser Valley in British Columbia. “It is part of the Indigenous people claiming back their cultural sovereignty.”

You may also be interested in:
• Canada’s mysterious lake monster
• The tiny village hidden inside the Grand Canyon
• Japan’s unknown indigenous cuisine

“I learned to cook in the bush,” Nottaway said, but she also realised education was important and went to culinary school. She graduated from Algonquin College in 2005, and then settled in Kitigan Zibi, a First Nations’ reserve located 130km north of Ottawa. In 2009, she opened her own company, Wawatay Catering, out of her home, which prepares dishes like braised deer with tea, game stews and wild rice sushi, inspired by her Kokom’s simple recipes. The name means “Northern Lights” in Algonquin and holds a special meaning.

“We believe that the Northern Lights are the colours of the spirits of our ancestors,” Nottaway said. “They guide us from the spirit world.”

Nottaway’s ancestors guided her well. Over the years, the Indigenous cooking she prepares in her log-house kitchen has not only reached new audiences throughout Quebec, but she’s also become something of a cultural ambassador for Algonquin cuisine. Five years ago, Nottaway fed former Canadian prime minister Joe Clark, who attended a lecture and dinner for truce and reconciliation in Ottawa. Another event included former Canadian governor general Michaëlle Jean. Earlier this year, she demonstrated her techniques at Restaurants Canada, the country’s top food conference. Cooking with two other rising Indigenous chefs, Joseph Shawana from Toronto’s Ku-Kum Kitchen and Christa Bruneau-Guenther from Winnipeg’s Feast Cafe Bistro, Nottaway shared some of her Kokom’s “bush-cooking” recipes.

Nottaway has become something of a cultural ambassador for Algonquin cuisine

She simmered smoked moose meat and onions in tea, served fish balls made from hand-caught carp, and made pikoodinigan. Nottaway tossed the toffee bits onto shredded, dried mushrooms while the other two chefs sprinkled blueberries and cream onto the cracked mahogany-coloured toffee dish. As the trio served the crowds forming around the tasting table, Nottaway explained that these dishes are typically eaten at Indigenous cookouts.

Bush cooking wasn’t always hip. The British and French first established Canadian settlements in the 17th Century. By the 19th Century, cooking traditional Indigenous dishes in Canada carried a stigma of being poor, and of uneducated people charring bush meat on an open fire. According to Newman, from the nation’s founding in 1867 through to the late 1800s, Canada’s first prime minister John Alexander Macdonald tried to eradicate the nation’s Indigenous residents by wiping out the very food they ate. “He killed the bison, essentially starving them,” she said.

Starting in 1884, the country also ran government-sponsored assimilation programmes in which children were taken from their families and sent to “residential schools” to learn the European way of living and eating – and to forget their own culture and food. “Food is critical to a culture because cuisine is essentially a language,” Newman said. Just as language, hunting, fishing and knowing how to survive in the wild are all passed down from one generation to the next in Algonquin culture, so are family recipes, which Nottaway learned by watching her Kokom cook.

Navigating the snowy forest landscape was one of the first things she learned from her mother and Kokom. “Don’t go out today, the snow’s falling hard, it will cover your tracks and you won’t find your way home,” she remembers them saying. Sometimes they suggested taking a dog to guard against the wolves, but Nottaway didn’t like that advice. The dog could scare the rabbits, and she was more concerned about her prey than the predators. After all, she came from a long line of strong and resilient people who weren’t scared easily.

That resilience carried Canada’s First Nations through the more-than-100-year assimilation programme, which only ended in 1996. In 2008, Stephen Harper, Canada’s then-prime minister formally apologised to the nation’s Indigenous residents for Canada’s history of forced assimilation. Then in 2017, Prime Minster Justin Trudeau again apologised for the “deep harm” inflicted on some 150,000 First Nation children through the programme.

According to Nottaway, these apologies caused Canadians who had never cared about Indigenous cuisine to suddenly become “super interested” in it. They also set the tone for a new era that allowed Canada’s Indigenous populations to reclaim their identity through age-old recipes and culinary traditions, including living off the land and in harmony with that land.

Nottaway’s Anishinabek family – a term encompassing several Indigenous groups and meaning “People of the Land” – has done that for generations. They know how to forage, hunt and fish with the seasons, following the food wherever it might be – rabbits in winter, blueberries in summer and maple syrup in spring. They believe that every plant and animal has a spirit.

“Before I make pikoodinigan, I always talk to my maple trees,” Nottaway said. “I ask them, ‘How are you guys? I hope you weren’t too cold this winter. Are you ready to work?’ And at the end, I say, ‘Thank you for all your maple.’”

Every spring, her family also thanks the carp, which come from the bottom of Lake Rapid to spawn, so that the Anishinabek people can stock up on fish for the year. Catching carp by hand was another knack Nottaway learned early. She would wade into the creeks, stand thigh-deep in the freezing water and catch the carp in her open palms.

“You have to put your hands around them very gently, so they’d think you were just another fish. And then you’d go snap, and hold them by the heads, so they can’t wiggle out!” she said. “I’ve taught my kids to catch carp by hand too, and we still do it every spring.”

But this spring she couldn’t go carp fishing because of Covid-19. She was worried that if she carried the virus, she could bring it to people who live near where the fish spawn. “That’s the community where I was born, and it’s so remote that they don’t even have a hospital, only a little clinic,” she said. “But I did speak with my fish spirit, and I said, ‘I’m sorry I couldn’t visit you this year because of what’s going on’.”

However, this spring, Nottaway was able to do something she’d never been able to do before. For years, she’d wanted to take her teenage daughter sugar-bushing, but she was always busy catering and her daughter always had school. But this year, with neither work nor school to stop them, Nottaway and her daughter packed some pots, chopped some wood and set up shop among the maple trees by their house, making pikoodinigan just like she did alongside her Kokom as a young girl.

“I didn’t think it was possible for me to fall in love with sugar-bushing more than I already did,” she said. “But this year I loved it even more because I could experience all of it with my daughter.”

And that means the tradition lives on. From Iraq, an Intimate Glimpse of the Religious Holiday of Arbaeen 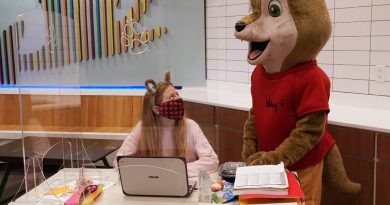 When the Classroom Comes With Room Service and Poolside Cabanas

Who Takes the Eurostar? Almost No One, as the Pandemic Fuels a Rail Crisis