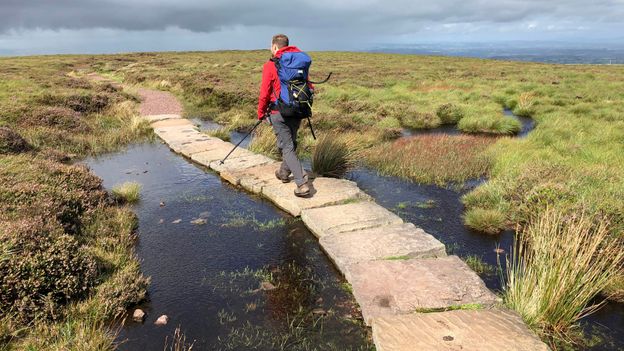 The old rules were simple. Legend tells that every Englishman found west of the dyke was hanged. Every Welshman who ventured east of the dyke had their ears chopped off.

This year has seen this sleepy borderland thrust into the spotlight

The dyke in question is Offa’s Dyke, a 1,200-year-old earthwork that spans the length of the England-Wales border. Like Hadrian’s Wall, The Great Wall of China (and, come to think of it, The Wall from Game of Thrones), Offa’s Dyke divided lands. It marked a threshold between Anglo-Saxons and Celts, plains and mountains, life and death, ears and no ears.

But unlike Hadrian’s Wall and the Great Wall of China, there is not much of it left to see. Today, dandelions and nettles sprout where battlements once rose. Generations of sheep have trodden on the dyke. It is now only a small bump – a hiccup in the fields. If an invading army were to cross it today, the best you could hope for is that they trip over the dyke and go home with a sprained ankle. Or maybe a nosebleed.

I was walking a section of the Offa’s Dyke Path, a 285km-long trail that travels the ruined sections of the dyke and weaves in and out of England and Wales, like a needle sewing a stitch. Being part-Welsh and part-English, I’ve long had an affinity with this mongrel path – having walked many parts of it over the years. Some of the UK’s footpaths stride heroically through the landscape, but Offa’s Dyke Path seems to bumble indecisively between the two countries, as if it were looking for something it never quite finds.

This summer I followed the Wye Valley section in South Wales. Over two days I passed woodlands where toadstools sprout under ancient oaks; lofty hills where you step in and out of low clouds; cider orchards quiet but for the thud of falling apples. In one of my favourite parts, the path passes the Devil’s Pulpit – a rocky outcrop on the edge of England – where legend tells Satan himself would preach, trying to tempt the monks of Tintern Abbey across the river in Wales. To me, both sides looked celestial in the morning sunshine.

Like the dyke itself, the England-Wales border is mostly invisible. Looking at a map, I could see it following rivers and streams, vaulting over garden fences. Further to the north, the border is more mischievous. It runs through a professional football club, trespasses on the fairway of a golf course and elbows its way through a pub car park. For hikers on the Offa’s Dyke Path, walking with this border is rather like walking a dog: sometimes it trots obediently by your side, sometimes it disappears into a bush. Still, you know it’s always somewhere nearby, keeping you company.

This year has seen this sleepy borderland thrust into the spotlight. England and Wales have shared a single set of laws since the 16th Century (among other things, they also share a police federation and a cricket team). But throughout Covid-19 they have taken separate paths. In June and July – as the first lockdown was initially eased in England, the Welsh authorities were more cautious, enforcing a far stricter set of rules for longer. Welsh police issued fines to visitors crossing over from England. Homemade signs – “Wales is closed, go home!” – appeared on the roadsides. Again, in October and November, Wales and England enforced lockdowns at different times, with police even setting up checkpoints on the border. In 2020, a boundary whose porousness had long been taken for granted has been, at various points, effectively shut. There is, perhaps, the faintest echo of the Middle Ages, when the dyke was part of a hostile frontier that few dared cross.

You may also be interested in:
• The tiny country between England and Scotland
• The British island that’s not in the UK
• The British town with a third ‘nationality’

Into the political debate surrounding Covid-19 has come Offa’s Dyke. Some on social media have made calls to “rebuild Offa’s Dyke” to stop infections arriving from England. With some in England prevented from visiting family over the border in Wales, a few have referred to the dyke as a “Berlin Wall”. It is not the first time the dyke has been politicised: years before, then-prime minister David Cameron called Offa’s Dyke “the line between life and death”, referring to Wales’ National Health Service.

“Borders have that ability to be manipulated in different directions,” said Howard Williams, professor of archaeology at Chester University and editor of  The Offa’s Dyke Collaboratory. “The dyke has been weaponised – but the reality is a much more complex story.”

Williams works in England and lives close by in Wales: he commuted over Offa’s Dyke and the border prior to Covid-19 and has witnessed first-hand the two countries’ different approaches to lockdown.

He insists Offa’s Dyke isn’t a useful analogy for modern times: not least because it was never built to divide England from Wales. It was most likely built in the 8th Century by Offa, King of Mercia (in the present-day Midlands) as a defence against various competing Welsh kingdoms to the west. It might have had timber ramparts, with thorny plants growing in a ditch below. It’s speculated it was used to control trade and levy taxes. But Howard believes that the dyke was primarily a statement of Offa’s power to his own Mercian subjects – a continuing tradition of rulers building walls to suit political agendas.

“Offa is trying to make himself look like a Roman emperor,” said Williams. “It’s as if he’s saying: ‘Make Mercia great again!’.”

There is no section of the Offa’s Dyke Path greater than the Black Mountains, a day or so’s hike north-west from the Wye Valley. Here, the frontiers of England and Wales touch on the crest of a mountain ridge, as if the two countries were tectonic plates colliding and rearing up out of the land.

For about 14km, the path itself marks the border. I made my way north: left boot in Wales, right boot in England. The last of the summer swallows darted through the cool mountain air and wild ponies skipped about the heather. From these windy heights, you get a god-like perspective on both nations. To the east was England with its web of hedgerows, a putter of combine harvesters, the rolling Herefordshire hills that inspired the cadences of Edward Elgar. And to the west were the Brecon Beacons on whose treeless summits storms stew; a range that seemed to mutter of ancient Welsh myths.

I came back down to Earth to the tiny market town of Hay-on-Wye (mostly in Wales, although the local supermarket is in England), snuggled in a fold of the hills. One local told me that one or two residents had been sneaking over the border to visit English pubs. But when I visited in late August, Welsh pubs had just reopened and tourists had returned. I stopped to rest my legs and have a pint.

For now, both England and Wales (together with Scotland and Northern Ireland) have agreed on a unified set of rules for the Christmas period. But beyond coronavirus, it seems likely Offa’s Dyke will pop up again in political discourse. Though the popularity of Welsh nationalism lags far behind its Scottish counterpart, a poll by YouGov last year shows support for an independent Wales soaring – with strong approval among young people in particular. To walk the Offa’s Dyke Path today is to travel the longest and the oldest seam in the union of the United Kingdom – the seam whose breaking would mean its final and total undoing. It is currently under more strain than at any time in recent memory.

Still, the path north from Hay-on-Wye to Knighton felt far from these considerations. It is distant from the governments of Westminster and Cardiff Bay, and there was often no phone signal to check debates on social media. It was hard to think of a more peaceful place than these dark woods and slow rivers on the margins of two countries. It still felt like a no-man’s land: a place often glanced out a car window on the road to elsewhere.

On my way out of Hay-on-Wye, I met Chris Stuart, a civil celebrant at funerals, from Worcester, about 50km east of the border. He is a veteran of long-distance paths and had come for the weekend to revisit the trail he conquered years before. We agreed the appeal of walking the Offa’s Dyke Path is never being sure which country you are in.

“It’s strange because for 50 yards you’re in England, for 50 yards you’re in Wales,” he said. But Stuart also thinks there is another division at play. “When you’re out walking the landscape and you meet someone, they chat to you – but once you get into the towns, there are day trippers; they don’t want to engage. The path has its own camaraderie.”

I said goodbye to Stuart, an Englishman who feels alive when he is walking the green hills of Wales. And nearby I expect there were Welshmen on the trail, listening to the birdsong of England with their ears still attached.

Places That Don’t Belong is a BBC Travel series that delves into the playful side of geography, taking you through the history and identity of geo-political anomalies and places along the way. Crisscrossing the Country on Highways Big and Small 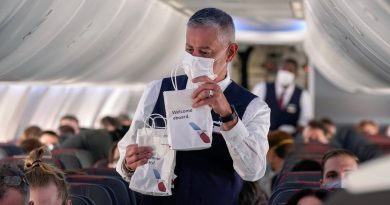