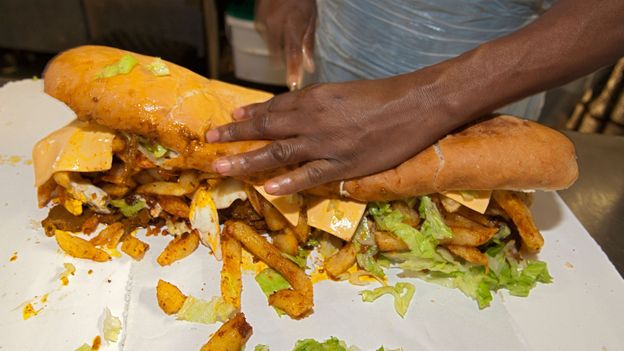 It’s a warm, sunny morning in the Cape Town suburb of Athlone, and Rashaad Pandy’s takeaway restaurant, Super Fisheries, is already busy. Pandy talks to me over the counter, breaking off our conversation to welcome familiar customers. People queue under the bright green and yellow menu boards, leaving with plastic bags containing their lunch. For most, it’s long, bulky packages wrapped in paper: the famous Gatsby sandwich.

They may take our land, but they’ll never take our Gatsby!

If you ask Capetonians about a local dish, a common suggestion would be the Gatsby – a foot-long, soft-white sub stuffed with combinations of meat (polony, masala steak, chicken or calamari), slap tjips (chips), sauce (piri-piri, tomato), cheese, fried eggs and salad. It’s an intimidating sandwich, requiring both hands and an empty stomach, the wrapper laid out to catch the bursting-forth contents, and a resignation to sauce-smeared cheeks and hands. Don’t be foolhardy enough to take one on solo; Gatsbys are made to share, usually cut in four.

The story of the Gatsby – or at least its name – tends to lead back to Pandy.

“It was way back in 1976,” Pandy said. Four men had come to help him clear a plot in Lansdowne, a Cape Town suburb. Pandy was born in the nearby suburb of Claremont, but his family was forced to move as part of the South African apartheid government’s racial segregation scheme.

The white supremacist National Party, which governed South Africa from 1948 to 1994, formalised apartheid (“apartness” in Afrikaans) and race-based status, with the minority white population as the ruling class. Below whites were mixed race (“coloured”) people and Asians, while black people had the lowest status. Many tried to hide their identities to avoid racist policies; Pandy’s Indian grandfather changed his name from Pandey to Pandy, which appeared more English.

Pandy had promised the men food from his shop in Athlone – a neighbourhood he described as “the heart of the Cape Flats” (a low-lying area southeast of the city) which became a centre of anti-apartheid activism a few years later, in the 1980s. When they returned, he gathered up what he had: “There were some chips left, one of the round Portuguese loaves… there was no fish, but I saw the polony [sliced meat, similar to bologna]. I heated up the chips, I heated up the polony, put some of the homemade atchar [pickle] on top of it and cut it into wedges… And the one guy, Froggy, that was his name, Froggy, he told me, ‘Laanie, it’s a smash, it’s a Gatsby smash!’.”

Froggy might have been referring to the novel-turned-1974 cinematic hit, The Great Gatsby – but wherever his phrase came from, the name stuck. Pandy was curious to see what his customers thought, so he put it on the counter the next morning. They suggested it was too difficult to eat in the round roll, but why didn’t he try a long loaf instead?

“You listen to what the customers want,” Pandy said. “From there, it just grew.”

“The only thing I needed was a name and [Froggy] told me it’s a Gatsby smash. All I did was put it on the market and see how it did.”

Pandy specialises in fish, so he doesn’t do steak and chicken variations, and still uses his father’s atchar recipe. He sells between 250 and 300 Gatsbys a day, as well as fish and chips. The calamari Gatsby sells well, Pandy says, but it’s still the original polony version ­– the cheapest – that remains the most popular.

The price is part of the appeal. Super Fisheries’ polony Gatsby costs 54 rand (£2.60), which is split between four. “Money is always a bit scarce in the Cape Flats, but the people always make do from what they’ve got,” Pandy said. “It’s good value.”

“A lot of people, they come from Joburg and they come straight from the airport. They want the original Gatsby.” Pandy added that with Uber, it’s been easier for international visitors to travel to Athlone from the city for a takeout from “the home of the original Cape Town Gatsby”, as the Super Fisheries sign proudly reads.

The emergence of the takeaway

There are many similar “sandwiches” in South Africa. Every big city has its own version. In Durban, it’s the bunny chow – a hollowed-out loaf of bread filled with curry. The AK is Johannesburg’s version of the Gatsby, made with the same ingredients and so-named because the way you hold the loaf in one arm might look like an AK-47.

“[South African takeaways] are all about apartheid in the hospitality industry, in so far as they are about black people not being allowed to eat inside the restaurant. You needed a way of taking the food away,” explained anthropologist and food writer Dr Anna Trapido (who noted that another possible origin of the Gatsby name was that the loaf resembled Robert Redford’s hat in the film).

Takeaway food in South Africa has not been analysed extensively through the lens of race, but a 2018 thesis by University of the Western Cape MA student Tazneem Wentzel shone a light on the Gatsby’s origins in a racist society. In her study – which is likely not only the most in-depth study of the Gatsby, but what appears to be the first – she explores the roots and cultural importance of the Gatsby and the Whopper burger, and looking more broadly at the role of takeaways in the Cape Flats from 1950 to 1980.

Last year, local media picked up on her thesis, curious about the “humble Gatsby” – a sandwich many Capetonians regard fondly – as an academic subject. Wentzel appeared on radio shows such as Cape Talk and Heart FM, online outlets such as News24, and on TV. “I feel that food history is an often overlooked and neglected topic,” she told News24. “We take for granted the kinds of histories we… ingest every day.”

Wentzel’s thesis examines the emergence of halal takeaway restaurants following “the implementation of the Group Areas Act in the 1960s”. The Group Areas Act, the first of which was passed in 1950, forced people of colour outside South African cities to areas such as the Cape Flats. This, she says, resulted in longer commutes, which meant there was less time available to prepare food in the kitchen, thus popularising takeaways.

In addition, the Gatsby is specifically designed for sharing, which Wentzel suggested represented a “particular kind of culinary belonging” at a time of great political and social injustice and unrest. Family-owned takeaway shops, like Pandy’s, became “a critical space of self-authorship [and] autonomy” in the face of systematic racial discrimination and oppression.

Suddenly, the Gatsby doesn’t seem quite so humble.

“They may take our land, but they’ll never take our Gatsby”

Given this history, you might imagine how jarring it is to see the Gatsby reimagined by white chefs.

In a 2018 Food Network video, chef Sonja Edridge attempted to gentrify the Gatsby with a version that included chopped spinach, curry, homemade mayonnaise, potato wedges, rocket and plum chutney on ciabatta. Capetonians ­responded with a mixture of indignation and ridicule. One wrote, “That Gatsby went to private school by the looks of it.”

Pandy says he didn’t care too much. “I’m easy,” he told me, shrugging it off. “[But] most of my customers responded to her. A guy from Bush Radio [Yuzriq Meyer] came in and was imitating that woman.” Meyer ended his send-up declaring, à la Mel Gibson in Braveheart: “For they may take our land, but they’ll never take our Gatsby!”

“Gentrified street food, wherever it occurs, is always awful,” Trapido said. “You lose the essence of what it’s about.”

“I’m sure there is space for a really good Gatsby in a restaurant context,” she continued, “but I’m not sure that the people that are doing it necessarily understand it from the inside. Because they’re getting the flavour wrong. I mean of course they’re getting the politics wrong, but they’re also just not understanding the taste, and it’s disrespectful if what you do doesn’t say ‘Gatsby’.”

Gentrified street food, wherever it occurs, is always awful

Gatsby lovers often recommend Cosy Corner in Wynberg, which opened in 1973 and is still owned by the same family. Pamela McOnie of Cape Fusion Tours tells me The Golden Dish in the Gatesville Shopping Centre is another popular spot, especially for their masala steak Gatsbys. And Mariam’s Kitchen, which has a branch in the central business district, is a long-standing takeaway favourite for Cape Malay and Indian food.

Pandy is happy that other local families are profiting from the Gatsby name: “Who benefits? Our community.”

“It keeps people going – that’s what I’m happy about,” Pandy said. “It feels good to think I did something for our community.”

4 Ways to Do More With Your Smartphone Camera Best foods to try in Poland 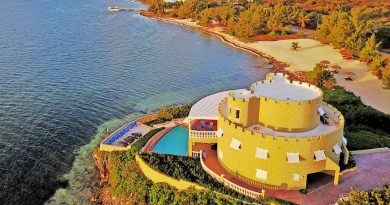 House Hunting in the Cayman Islands: A Compact Castle in the Caribbean