Transport Canada says it is pleased with the results of an underwater acoustic glider used to help detect the endangered North Atlantic right whales as they migrate to and from Canadian waters in the spring and fall.

While the federal department has been testing different technology over the last few years for finding right whales, this was the first year an underwater glider and a drone were added.

Researchers hope they will help them to understand the movement patterns of the species, as well as provide earlier detection to prevent ship strikes.

“Within the first 24 hours of operation, the glider detected the North Atlantic right whale and a slowdown was triggered in that corresponding zone,” said Michelle Sanders, director of Clean Water Policy with Transport Canada based in Ottawa.

“It’s been a really valuable resource to support the dynamic management of the measures. And we really consider that one a success for this year.”

Sanders said the glider, which was a technology partnership with the University of New Brunswick, was deployed for two months.

During that time it was in a shipping zone south of Anticosti Island in the Gulf of St. Lawrence, and detected nine right whales.

“We will definitely be looking at how we can continue to better integrate this technology into our monitoring system. So with the glider especially, we’re looking to at least have one, if not two, next year.”

Last week, the latest population numbers were released at the annual North Atlantic Right Whale Consortium. There are just 356 right whales left in the world, down from 409 last year — news that came as a blow to researchers.

There have been no reported deaths of right whales in Canadian waters so far in 2020.

Canada’s federal government has been quick to respond in recent years, implementing fishing area closures as well as speed restrictions on shipping vessels.

New for Transport Canada this year was bringing speed limits down to all ships over 13 metres — it only applied to vessels over 20 metres last year — as well as a mandatory restricted area around the Shediac Valley and a trial voluntary speed limit to 10 knots through the Cabot Strait, an important corridor for the whales.

“The aim of the 2020 measures is really to more efficiently target vessel traffic risks to North Atlantic right whales over the course of the season. So especially as they migrate in and out of the Gulf of St. Lawrence in the spring of the fall without, of course, jeopardizing safety and security of mariners,” she said. 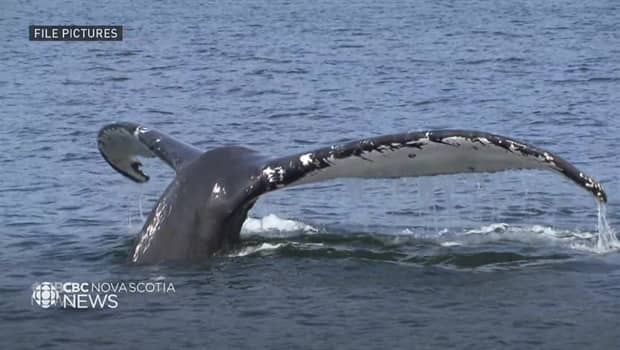 Researchers of the endangered North Atlantic right whale are dealing with a major blow this week, as the latest population estimates suggest there are only 356 right whales left. The CBC’s Emma Davie reports. 2:49

While the drone was able to cover more distance than the underwater glider, Sanders said it didn’t spot any right whales this year. It did, however, find other species such as fin whales, humpback whales and basking sharks.

“Given the sightings that it has had of other species, it shows that it is working and is a valuable tool for us next year as well.”

Sanders said Transport Canada hopes to test a land-based infrared camera near the Cabot Strait before the end of the year to see if it, too, could detect right whales as they’re going through that area.

But she said the testing of that camera was delayed due to the pandemic.

Scientists expressed concerns with gaps in right whale tracking during the height of the COVID-19 lockdown, when there were fewer boats on the water and planes in the air to spot the whales.

Sanders said the pandemic delayed the glider’s deployment by about two months, prevented U.S. scientists from flying over Canadian airspace to spot the whales and even impacted the participation of shipping vessels in trial slowdown areas.

“With safety protocols, just concerns and the stress of dealing with the pandemic and making sure that they were following all the new requirements of where they could go, where they couldn’t go,” she said. “So we know that that had an effect.”

Sanders said the reduction in right whale deaths this year means she is hopeful Transport Canada is “doing something right.”

“I think what we continue to learn is that there’s no silver bullet. There’s no one thing that is going to work for everybody, everywhere,” she said.

Wild manatee found with ‘Trump’ drawn on its back