The nights are getting chillier and the leaves are beginning to fall from the trees. There’s no doubt that fall is here.

The good news is that these nights are a perfect time to not only stargaze but also planet-gaze, thanks to less moisture in the air that can typically cause atmospheric disturbances when out enjoying the night sky.

Right now, there are three planets visible in the sky after sunset: Saturn and Jupiter in the southwest (though they set around 10:00 p.m. local time), and Mars to the east.

But Mars is the star of the show.

The last time Mars was closer was in 2018 when it was 57.6 million kilometres away. However, that year the planet was in the midst of a massive dust storm that caused it to be slightly fainter than it would normally have been.

However, on Wednesday, the planet reaches opposition, a point where Earth lies directly between it and the sun, which means it will be at its brightest. This occurs roughly once every two years. In fact, it’s already brighter than Jupiter, which is typically the second-brightest planet in the sky, after only Venus.

Mars will shine at a magnitude of –2.62 over the next few nights, whereas Jupiter shines at –2.27. Astronomers measure the brightness of celestial objects using a magnitude scale with brighter objects having negative values.

Mars reaches opposition around 7:20 p.m. ET on Wednesday. And because of this, it rises just as the sun sets.

How to enjoy it

You can find Mars rising in the east just after sunset. It’s best to view, however, higher in the sky as there’s less atmospheric disturbance. As it rises, it reaches its highest point in the southern sky around midnight, but you don’t have to stay up that late to appreciate just how bright and beautiful it is standing out in the night sky.

The only thing you need to enjoy it is clear skies. If you want a close-up view, binoculars are good, but not necessary. However, with a clear sky and a telescope, viewers will be able to see some amazing surface details and polar ice caps.

Mars imaged from London on the night of the 6th October – the day of its closest approach to Earth for the next 15 years (~62 million km).#Celestron Edge HD11, #Televue 2.5x Powermate & #ZWO ASI174MM camera.#mars #london #planets #space #astronomy #astrophotography pic.twitter.com/MB3vFwSjIo

There are a few ways you can enjoy the show for free if you don’t have a telescope of your own.

York University’s Allan I. Carswell Astronomical Observatory in Toronto is hosting a Mars opposition online event from Sunday to Thursday night from 8 p.m. to 10 p.m ET.

After Wednesday, Mars starts to get fainter, though it will still remain visible in the night sky. By the end of the month, it will once again be fainter than Jupiter, though still shining brightly.

Now, if you missed the close-approach of Mars, don’t sweat it: the next one occurs on Dec. 8, 2022 when it will be roughly the same distance from Earth.

Astronomers discover huge exoplanet has the density of cotton candy 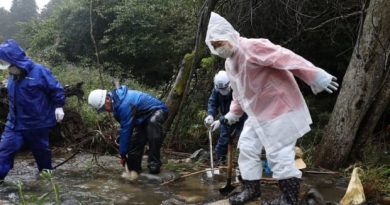