The Canadian navy’s new frigates will get a cutting-edge radar system that has never before been installed on a warship — a recent decision that quietly ended a heated debate within the $60 billion warship program.

The Lockheed Martin-built AN/SPY-7 radar will be installed on the new warships despite a furious back-room lobbying campaign by elements in the defence industry to convince DND to take a pass on the new system.

It was a critical decision — one on which the federal government has been silent, apart from a few scattered social media posts, despite repeatedly promising to be more open and transparent about the multi-billion-dollar decisions it makes on shipbuilding.

The choice of a radar system for the frigates has important implications for the military, as well as for the taxpayers who will foot the bill for Ottawa’s $60 billion plan to build 15 new surface combat ships for the navy.

It also has significant political ramifications because Lockheed Martin’s AN/SPY-7 radar is easy to upgrade to a ballistic missile defence system — a defence program successive Canadian governments have resisted joining.

The contract to install the radar system on the new frigates was awarded in September by the warship’s prime contractor, Irving Shipbuilding Inc., and acknowledged publicly by Lockheed Martin Canada earlier this month.

Japan purchased a land-based version of the radar to serve as an early warning system for North Korean ballistic missile launches. That plan was rolled back earlier this year in response to fears that the missile batteries — located near the radar installations — would pose a hazard to densely-populated surrounding areas.

At the moment, Canada and Spain are the only two countries planning to put the SPY-7 on their warships, although Japan has now also signalled it might equip some of its new warships with the technology.

For more than three decades, Canadian governments of both political stripes have turned down U.S. overtures to join its ballistic missile defence (BMD) network. The issue became a diplomatic lightning rod the last time it was discussed over 15 years ago.

The new frigates, including their radar systems, are being designed with BMD in mind in case a future government decides to get Canada involved.

The potential for a new political brawl over BMD worries leading defence expert Dave Perry less than the technical and budget issues related to the federal government’s choice of radar system.

In a statement, the Department of National Defence insisted that the cost of adapting the radar to the Canadian frigate design “will be covered as part of the ($140 million) long-lead contract” signed with Irving Shipbuilding in early 2019, after Lockheed Martin was selected to design the new ships.

There is another concern, though.

The fact that the AN/SPY-7 “has not been marinized and deployed on a ship at sea is significant,” said Perry, a defence procurement expert and vice president of the Canadian Global Affairs Institute.

“It means on the spectrum of developmental production, it is far closer to the purely developmental end of the spectrum than something that is deployed and has been proven on a couple of different navies around the world,” he said.

Lockheed Martin officials dispute that assessment, saying all of the components have been used on warships in one way or another, including the cabinets used to house the electronics.

“The SPY-7 radar is not in development. It was designed for use as a maritime radar and is based on mature technology that has been thoroughly tested and is being adapted and scaled for a variety of customers in both land-based and at-sea applications,” said Gary Fudge, vice president and general manager of Lockheed Martin Canada Rotary and Mission Systems.

The company officials concede it will take design work to integrate the system into the new Canadian frigates, but insist that would be true of any other new radar system.

There are still risks, Perry said.

“Canada has a lot of problems bringing development technology into service,” he said, pointing to auditor general reports on the procurement fiasco involving the CH-148 Cyclone maritime helicopter and the 16-year quest to replace the air force’s fixed-wing search plane.

DND said the AN/SPY-7 was pitched as part of Lockheed Martin’s bid to design and manage the frigate program, and the navy needs the most up-to-date technology in warships that will be in service for decades.

DND was targeted by a furious behind-the-scenes lobbying campaign aimed at getting it to drop Lockheed Martin’s radar system.

An unsolicited defence industry slide deck presentation — obtained and published last year by CBC News — made the rounds within the government and landed on the desks of senior officials and military commanders. It described the AN/SPY-7 as “unproven technology” that will be “costly to support.”

Lockheed Martin officials pushed back against that assertion recently, saying that the new system will be easier to maintain, relies on existing components and — importantly — doesn’t have to be switched off for maintenance work.

Lockheed Martin officials were less clear on whether the overall system has yet to be fully certified for use on warships at sea.

“SPY-7 technology has been declared Technical Readiness Level 7 by the U.S. government, meaning it has been tested in an operationally relevant environment,” said Fudge.

“SPY-7 for CSC takes advantage of investments across multiple shore and sea based programs as well as internal funding for its development and testing. Canada has agreed to pay for the CSC-specific requirements and integration of SPY-7 into the CSC platform, which is required for any radar selected.” 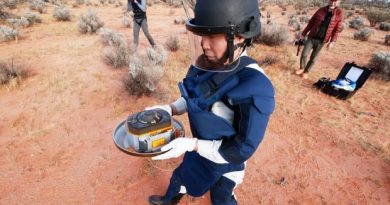