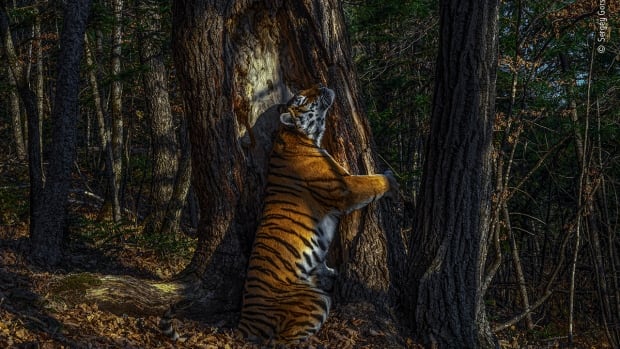 No human was present when the 2020 Wildlife Photographer of the Year’s winning image was shot.

Titled The Embrace, the photograph shows an endangered Amur tigress with her huge front paws wrapped around a Manchurian fir tree, as she rubs her cheek against the bark to leave behind her scent as a message to other tigers.

Russian photographer Sergey Gorshkov had left a hidden motion-triggered camera at that spot in the woods nearly a year earlier. It was the first of a series of trees he had carefully chosen, thinking they were places tigers might leave messages for other tigers in the form of hair, urine, scratches or scent marks.

The jury chose the photo out of 49,000 entries from around the world to the 56th annual competition put on by the Natural History Museum in London.

“The remarkable sight of the tigress immersed in her natural environment offers us hope,” Tim Littlewood, the museum’s executive director of science, said in a statement Tuesday morning.

Littlewood said the Amur (or Siberian) tiger’s numbers are growing as a result of dedicated conservation efforts. In the 1930s, there were fewer than 30 animals left worldwide, according to the International Union for Conservation of Nature (IUCN) Red List of Threatened species. By 2005, the population had increased to 360. Recent, unpublished data suggests there may now be up to 600, according to the competition.

The winner of the Young Wildlife Photographer of the Year competition was Liina Heikkinen of Finland, with The Fox that got the Goose. The photo of a young fox covered in feathers after refusing to share its kill with its five siblings was “a great natural history moment captured perfectly,” wildlife filmmaker and juror Shekar Dattatri said in statement.

The competition also recognized Canadian photographers, including Garth Lenz and Andrew Wright in the wildlife photojournalism category, investigating the relationship between humans and the natural world. Their images don’t show wildlife, but stark imagery of the impact of the oil and gas industry.

Lenz, based in Victoria, B.C., shot World of Tar at the Mildred Lake oilsands mine in Alberta years ago while working with a team to shoot the documentary The Tipping Point: The Age of the Oil Sands. The film featured Hollywood director James Cameron, and premiered on CBC’s The Nature of Things in 2011.

At the time, Lenz was on the ground when Cameron and some others took off in the team’s helicopter. As it took off, he saw a beautiful light developing. With the helicopter gone, Lenz drove quickly to where he could charter a plane and capture the mine in that light.

He said showing scale in such a setting is difficult, but house-sized trucks that appear tiny in the foreground, and pinpoints of light from other trucks in the background, give “a sense of how immense these mines are” in this photograph.

“I think that the oilsands are one of the most visually compelling examples of just what extreme measures we’re willing to go to in order to meet our energy needs and meet those needs from fossil fuels,” he said.

Wright’s image of a field of oil pumpjacks in California’s San Joaquin Valley, The price of oil, captures a similar idea. But he notes that even so, it represents only a tiny fraction of the global infrastructure investment in oil and gas over a century.

“The scale of the picture speaks to the size of the task before us and the work that we’ve got to get on and get going with converting to renewables,” said Wright, founder and executive director of the Willow Grove Foundation, which supports conservation and social projects; and an adjunct professor in the Faculty of Environment at Simon Fraser University in Vancouver.

Wright does volunteer photography for conservation groups. He had always wanted to photograph the place with the highest density of pumpjacks, and saw and opportunity during a project for a California-based group called Island Conservation. He spent an hour and took 400 shots trying to take the image from a public park several kilometres away in 40 C heat that melted the rubber grips off his lens.

He hopes the image is food for thought.

“What I really want people to think about moving forward is how do we gainfully move forward, taking care of everybody in the oil and gas industry so that they have an economic pathway forward?” he said.

More uplifting, perhaps, are the photos captured by two young Canadians, Matthew Henry and Hannah Vijayan, who were recognized for wildlife portraits of a cow moose and a grizzly bear, respectively, in the 15-to-17-year-old category.

Now 18, Henry took the photo of the cow moose during Thanksgiving weekend two years ago. Henry, who is from Treherne, Man., had been spending the holiday with his family at their cottage in Riding Mountain National Park. They decided to go for a drive, and Henry, who had been an avid wildlife photographer since he was 12, spotted the moose.

His parents stopped the car. At first, the moose was far away, Henry said. But as it began walking toward them, a heavy snowfall began. Finally, the animal stopped at a nearby puddle, and Henry realized he could get a closeup of its face behind the snow, with its body as the background. After several tries, Henry captured the perfect image as it lifted its head from drinking.

“As soon as it saw it, I knew it was something special,” he told CBC News.

As of Wednesday afternoon, CBC News had not yet reached Vijayan for an interview.

Where to see the photos

Canadians will be able to see the all the images at the Royal Ontario Museum in Toronto from Nov. 21 to May 2, 2021, or online now at the Natural History Museum website.

How carbon capture technology can add to the emissions problem