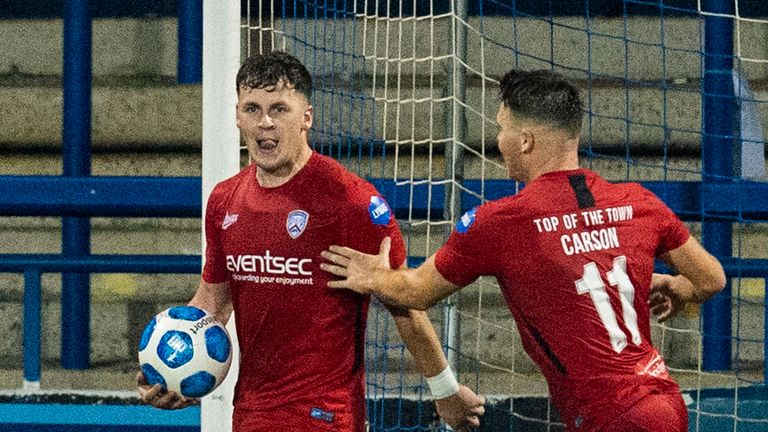 Northern Irish minnows Coleraine were beaten on penalties by Motherwell in Europa League qualifying, while Aberdeen won 2-0 at Viking.

Coleraine came within spot-kicks of extending their longest-ever run in Europe as ‘Well keeper Trevor Carson kept out all three of their penalties – ironically, having been beaten twice from the spot in normal time as the hosts recovered from a 2-0 deficit to draw 2-2 after full-time and extra-time.

The Bannsiders were two goals behind at the break, with visiting strike partnership Callum Lang and Tony Watt both on target, but a much-improved second half saw them pull level through a pair of Ben Doherty penalties, with Bevis Mugabi sent off for conceding the second on Eoin Bradley.

The substitute would then strike the crossbar in added time as Coleraine pushed for another famous victory, but having held their Scottish Premiership hosts over 120 minutes, saw all three kept out by Carson as Stephen Robinson’s side squeezed through.

Aberdeen extended their winning run in all competitions to six games with a 2-0 win over Viking in Norway, and will now play Sporting Lisbon in Portugal next week in the third round of qualifying.

Ross McCrorie put the visitors ahead with a fine strike, his second in as many outings, before Ryan Hedges added a second straight from his second-half corner kick 12 minutes from time.

Zlatan Ibrahimovic netted the opener as a strong AC Milan side were kept to a respectable 2-0 win over Shamrock Rovers in Tallaght.

Rovers will be frustrated not to have blotted the Italian giants’ copybook, however, with Aaron Greene guilty of missing three presentable chances and Ronan Finn another, with Hakan Calhanoglu netting the second goal for the visitors.

“Paolo Maldini and the coach came over and were really positive in how they spoke about how we played. They were full of compliments and it’s nice to hear,” said manager Stephen Bradley after full-time, as quoted by the Irish Mirror.

“It’s very small margins at this level. We could have prevented the first goal but it’s split seconds and you’re punished.

“When you do that around the box it’s two touches and it’s in the back of the net, especially when you have someone like Ibrahimovic.

Elsewhere, Belfast side Linfield were stunned 1-0 by Maltese side Floriana, with Matias Garcia’s 10th-minute goal enough to see the visitors through into the next round of qualifying.

The favourites’ task was made no easier when defender Ross Larkin was shown a second yellow card 16 minutes from time, and came close to a last-gasp leveller when Jimmy Callacher’s effort was kept out by Etim Atkpan, but missed the chance to progress to the third qualifying round where they will face Estonia’s Flora Tallinn.