Marco Arop believes it’s the best he’s ever felt through 600 metres of a race. But near the home stretch of a men’s 800 event in August, the Canadian runner sensed his lead slipping away, felt the shoulder of American Donavan Brazier brush against his and panicked.

Arop’s body tightened up while Brazier, the world’s top-ranked 800 runner, accelerated on the outside down the straightway at a sun-drenched Stockholm Olympic Stadium to another victory in a pandemic-shortened season.

“Sometimes in a race, if you push too hard it ends up slowing you down,” Arop said over the phone this week from Starkville, Miss. “No matter how comfortable I am, when I see someone pass me, I have to stay comfortable and not be too reactive.

“Since my first collegiate season, there have been a lot of races when I would have a good 600 metres and the final 100 would get me. I was always told if I had a strong base [of a training program] I would be able to finish stronger.”

To that end, Arop has worked on improving his physical strength the past three months with Mississippi State University head track and field coach Chris Woods, with weekly 13-kilometre runs, weight training and circuits — sets of 400 to 1,000-metre runs in combination with other exercises. 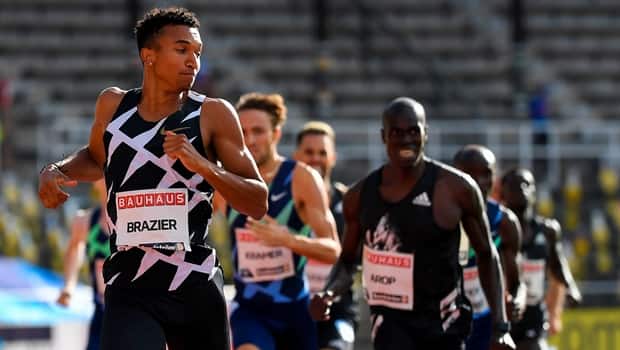 Arop has emphasized more volume in his workouts and a greater focus on recovery at the rest stage to prevent injury. For example, if he does repeat runs of 1,000, Arop might swim the next day for recovery and follow that with a 20 to 40-minute fartlek — a period of fast running intermixed with periods of slower running.

For his Saturday long runs on a grass field or gravel trail, the 22-year-old has started at a six-minute 40-second pace per mile and gradually increased his speed to clock a 6-flat pace at the halfway mark ahead of a strong finish.

“Before, I’d probably start at 6:40 and go slower towards the end, finishing at around a 7:30 [pace]. I’m now able to pick up the pace,” said the six-foot-four Arop, who trains six days a week and has added five pounds to his regular racing weight of 175. “My body is holding up well. I feel stronger and more fit to run faster for longer periods of time.”

Woods, who also coached Arop before the three-time All-American announced last December he was foregoing his NCAA eligibility to turn pro, has been encouraged by the runner’s consistency in training.

“I am excited to see what he is capable of doing once we start doing things more specific to his race,” Woods said.

“He’s been in this sport for such a short time and there’s several things we haven’t been able to get to because we don’t want to rush his growth and potentially get injured.”

I truly believe Marco is one of the best 800 [metre] runners on the planet and I hope we can showcase that during the [Tokyo] Olympic Games.— Chris Woods, Mississippi State University head track and field coach

Still, the 15th-ranked Arop, who didn’t start running seriously until he was 17  in his final year of high school in Edmonton, was able to get out strong in races in 2020, take the lead against Brazier and beat top-six runners Ferguson Cheruiyot Rotich of Kenya, Amel Tuka of Bosnia and Puerto Rico’s Wesley Vázquez.

“They’re amazing runners and to be in the same conversation as them does give me a lot of confidence going into next year,” Arop said. “I’m hoping to surprise [Brazier] in the upcoming season. I do respect him as a runner and I want to give him my best shot when the time comes.”

Arop also shaved four seconds off many of his early 2019 performances to a personal-best 1:44.14, a time that falls below the 1:45.20 Tokyo Olympic standard and one he feels could have been lowered by “maybe” another second. 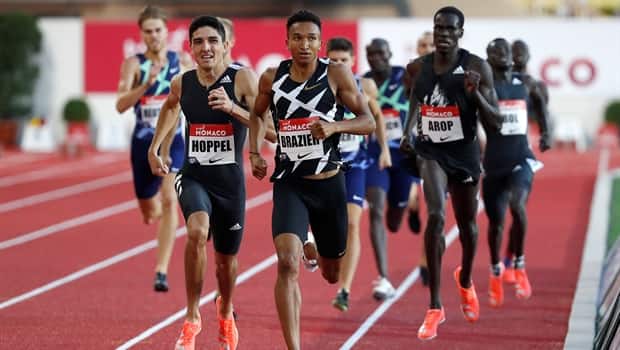 American Donavan Brazier won the men’s 800 metre race at the Diamond League Monaco event, ahead of compatriot Bryce Hoppel and Edmonton’s Marco Arop who ran to a new personal best time of 1:44.14. 6:02

Early in 2019, the Sudan-born Arop recovered from a hamstring injury and enjoyed a breakout season that featured a Pan Am gold medal and seventh-place finish in his world final debut last October in Doha, Qatar.

‘The sky is truly the limit for this young man’

Right now, Woods said, there isn’t a ceiling to the 2018 Canadian champion’s potential.

“I truly believe Marco is one of the best 800 [metre] runners on the planet,” he said, “and I hope we can showcase that during the Olympic Games [next summer]. Not to be cliché, but the sky truly is the limit for this young man.”

At the insistence of his parents and four brothers, all of whom contracted the coronavirus in September, Arop will stay in Mississippi through the Christmas holiday season to build upon the momentum of his fall training.

“They know how important it is for me to have a training period through the winter [entering an Olympic year]. I went home a year ago and got the flu which put a stop to my training for about two weeks and the next month was spent regaining my fitness,” he said. “It’s very common for my mom to have a cold and she was the most at-risk [for COVID-19] having diabetes and high blood pressure. I’m just thankful they all came out of it fine.

“It was a reflective time for me, to not take little moments for granted. It was a reminder to make sure when I talk to them to tell them how I feel and check in with them as much as I can.”