Boxer Mandy Bujold wears sensors in her hand wraps that measure the power and speed of her punches.

One of her workouts includes five-minute rounds on the heavy bag in her garage. She’ll do three rounds. The goal is to throw 1,000 punches per round.

“It’s just trying to keep that output high, but then also trying to maintain a certain level of power, so that I know I’m not fading as the rounds go – that type of thing,” Bujold said.

“I’m trying to be creative. But how are you competitive when you don’t really have a competitor, right?” 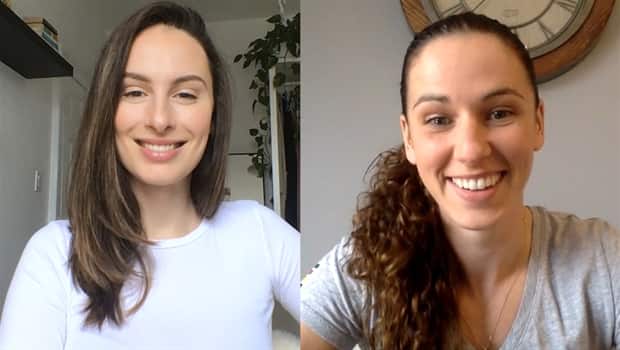 Boxer Mandy Bujold of Cobourg, Ont., has a young daughter, but now the push to 2021 will mean waiting for a second child. 5:22

The two-time Pan Am Games champion, who hopes to compete at the Tokyo Olympics after an illness derailed her medal dreams at the 2016 Rio Games, has barely been able to spar with an opponent since COVID-19 grounded sports globally last March.

The 33-year-old from Kitchener, Ont., has turned to technology.

“Which is funny, because, not that I’m old school, but I’ve never really relied so much on technology for my training,” she said.

The 11-time Canadian flyweight champion is using BlazePods, which are panels of flashing lights, like high-performance sport’s version of Whack-A-Mole.

“It’s similar to having an opponent in front of me, like if they’re trying to like fake me out, or if there’s an opening, do I react to that opening right away?” Bujold said. “It can measure how quickly you react to that light. So it’s pretty applicable to the sport.”

She also uses NeuroTracker to work on mental focus. The program, which is used by NBA, NFL and NHL players, involves following a series of moving balls — like a high-tech shell game — via 3D goggles.

“It’s been challenging, but it’s interesting, because I do find I’m noticing little details now,” Bujold said. “I’ll walk into a room and I’ll notice a label on something … it’s just sharpening what you’re seeing and [the ability] to focus on a small target.”

Bujold had been sparring with a woman in Kitchener before Ontario implemented tighter COVID-19 restrictions. She’s still waiting to hear on how the province’s reopening this week and next will impact her training.

Olympic qualifying begins in May

Her Olympic trials, originally scheduled for March in Argentina, have been pushed back to May, for a first qualifier, and June, for the final qualifier. Combat sports have taken a particularly hard hit from restrictions, so Bujold isn’t sure if and when she’ll be back in a competitive ring to prepare for the trials.

She’s frustrated. But at the same time, she believes the individual work she’s doing will also help in the long run.

“I’ll be able to look back and say ‘You know what? That was actually really cool.’ I had opportunity to spend some time on those little things that normally, if I had a fight coming up, wouldn’t have time to explore or try new things.”

“Which is fun and exciting, because as an athlete, especially at this level, you’re always looking for that one per cent, right?” she said. “These are the little tools that maybe your competitors aren’t using, so you kind of have that advantage.”

Today’s workout was all about core stability while punching 👊👊 pic.twitter.com/c1AAwwo6pr

The absence of sparring is reminiscent of Bujold’s pregnancy a couple of years go.

“It’s hard to stay sharp when you’re not seeing punches,” she said.

She empathizes with parents and teachers trying to keep kids active during the pandemic. A chance meeting with Mike McDonald – he stayed briefly in the AirBnB owned by Bujold’s parents – led her to partner with Recess Guardians, of which McDonald is the founder and CEO.

The programs, which is in over 700 schools across Canada so far, builds leadership activities and encourages a healthy lifestyle.

McDonald’s new charity “Active8” is a seasonal box sent to schools full of resources for games and activities.

“It’s fun because we’re filling a need right now,” Bujold said. “Teachers are already stressed [working around] all the new rules. So, we can take something off their plate that they don’t have to worry about.”

The ideals of Olympism would be welcome in 2021