A handful of Olympic veterans will be joined by a group of development athletes looking to make their mark when Canada’s newly-named National Skeleton Program gets back on the international track early next year.

Bobsleigh Canada Skeleton named 14 athletes to its 2020-21 program on Wednesday.

The team will be led by Olympians including Jane Channell, Elisabeth Maier, Kevin Boyer and Dave Greszczyszyn. Meanwhile, Mirela Rahneva is recovering from an injury.

Channell and Maier have both finished third in the Overall World Cup standings throughout their careers. Maier rejoins the national team after a one-year maternity leave. 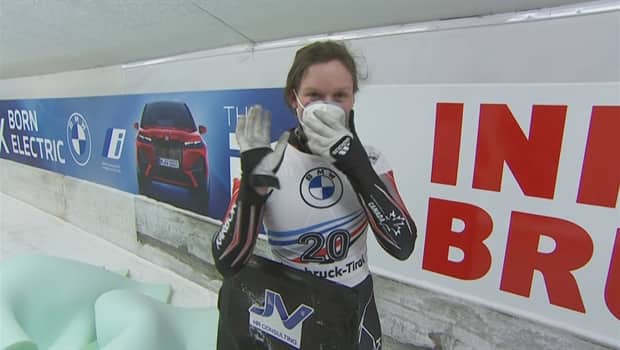 Calgary’s Elisabeth Maier returned to the World Cup Skeleton tour after recently becoming a mother and recorded a one run time of 54:52, good for 7th place at Innsbruck, Austria. 2:04

Channell says that safety protocol is at top of mind as the team prepares to return to the international stage.

“COVID-19 has forced everyone to remain in a high alert, fluid state. It’s exhausting but is necessary in order to keep the bigger picture in mind,” said Channell in a press release from Bobsleigh Canada Skeleton.

“The things we took for granted, like our health, is now at the forefront with decision making. Do we travel and compete or stay at home and train?

“While it would be nice to have our track in Calgary running, Canada is fortunate enough to have a home track in Whistler which has opened its doors to us, allowing us to train and slide on world-class ice.”

“This is a talented group of athletes who are focused on winning medals internationally,” said Le Bihan.

“Led by our Olympic veterans, this group has proven they can compete with the world’s best. Our focus this year will be on the world championships providing it is safe to travel following the holiday break, and putting the finishing touches on our 2020-21 preparations for the critical Olympic year.”

While travel details are not yet confirmed, the National Skeleton Program plans to field Canadian athletes for international competitions — both in Europe and the United States — following the holiday break providing it is safe to do so.

Why playing arena hockey can be risky during the pandemic