Saturday night in Shawinigan, Que., longtime middleweight contender David Lemieux will face journeyman pro Francy Ntetu in the main event of a three-bout fight card that should end a seven-month moratorium on professional fighting in Canada. We say “should,” because executing the event, organized under guidelines crafted to prevent the spread of COVID-19, still depends on local caseloads, and the discretion of Quebec’s health ministry.

Like many other businesses, the professional fight industry in Canada went offline in mid-March, when the COVID-19 pandemic prompted provinces and states to declare emergencies.

In other countries, deep-pocket promoters and their powerful broadcast partners have resumed a schedule that seems normal. On Oct. 17 ESPN will broadcast a high-stakes lightweight title fight between Ukraine’s Vasyl Lomachenko and New York’s Teofimo Lopez, a bout originally slated for May 31. But here in Canada, the shutdown continued until late August, when promoter Camille Estephan convinced officials in Quebec that he could stage a show that satisfied health guidelines.

The absence of live fight events in Canada has helped make some of the industry’s subtle inequalities more stark, and forced promoters to re-think their relationships with ticket buyers and broadcast partners. And planning an event amid a pandemic makes a risky undertaking even more precarious. Estephan’s safety handbook is 30 pages long, but Quebec reported more than 1,300 new COVID-19 cases on Tuesday alone.

“I’m just crossing my fingers we can do this one,” said Estephan, head of Eye of The Tiger Management. “The numbers are going up every day.”

As of Tuesday afternoon, this weekend’s card was still scheduled to proceed.

In the first 10 months of 2019, Canadian venues had hosted 45 live professional boxing events. By the same point this year that number had stalled at seven, thanks to the pandemic.

When the New York State Athletic Commission cited the pandemic in refusing to sanction an Ultimate Fighting Championship card originally scheduled for April 18, the UFC kicked off a frantic search for a new venue. After a plan to move the card to tribal land in California collapsed, the event moved to Florida, where governor Ron DeSantis had declared pro sports an essential industry, and where state commission officials sanctioned the bouts.

Meanwhile, it still isn’t clear whether Saturday’s proposed card signals the re-opening of Canada’s pro boxing industry, or is an isolated event during an ongoing public health emergency. Major U.S. jurisdictions have opted to press ahead with robust fight schedules, even as COVID-19 cases continue to rise. Clark County, Nevada, home to boxing hub Las Vegas, has reported more than 3,200 new COVID-19 cases over the last week, according to a New York Times database.

But in Ontario, where bars and casinos remain open, decision-makers remain cautious about boxing.

“At this time, professional combative sports are not among the sports allowed to return because of continued health and safety risks due to COVID-19,” a ministry spokesperson said in an email to CBC Sports.

“I’ve spoken to multiple commissions and they’re all in the same position,” said Toronto-based promoter Lee Baxter. “In terms of shows, we’re at a standstill.”

Estephan successfully lobbied the province for permission to stage this Saturday’s event only after presenting measures aimed at negating the risk of spreading COVID-19.

He had, for example, originally wanted to stage 10 bouts, but trimmed the event to three fights. Everyone involved, from fighters and coaches to broadcast crew and commission staff, will undergo COVID-19 testing upon arrival in Shawinigan. Estephan says the screenings will cost roughly $12,000 total.

‘If we’d had a crowd, we’d have been cancelled’

The original plan included room for 250 spectators, but a recent increase in COVID-19 cases prompted Estephan to rule out a live audience, trading ticket revenue for safety.

“It’s a big sacrifice for the fighters, but it gave the government the safety they needed,” he said. “As the numbers were shooting up with the second wave, I decided against [an audience]. If we’d had a crowd, we’d have been cancelled by now.”

Fighters and their trainers are also required to isolate for a total of 24 days – 14 leading up to the fight and 10 more afterward.

For veteran heavyweight Dillon Carman, who faces highly-regarded prospect Arslanbek Makhmudov in the co-feature bout, the rules meant training in a section of the boxing gym at Mississauga’s Olympia Muscle and Fitness reserved for him, and disinfecting it before and after each session. It also meant relocating from Madoc, Ont. to a hotel near the gym, and eliminating face-to-face contact with anyone besides his coach, his sparring partners, his girlfriend and his dog.

“We weren’t able to get exactly what we wanted, but we worked with what we had,” Carman said. “I’ve been going through withdrawal. I need this. Not just for the pay cheque. I need to fight. I’m a fighter through and through.”

Carman estimates that between the hotel and the cost of keeping his section of the gym sanitized, he’ll spend nearly a third of his payday for Saturday’s fight on COVID-19 safety measures. Those expenses highlight a divide in pay and prominence, even among Canadian-based fighters, that has grown during the pandemic.

While Carman’s 14-5 record seems pedestrian, and he’s not as well-known as fighters at the top of the heavyweight division, he’s a hard-hitting and fearless brawler who delivers entertaining fights, and the kind of veteran against which promoters want to test their top young heavyweights. A win over Carman would signal Makhmudov is ready for stiffer challenges.

All those factors add up to earn Carman a purse big enough to cover the extra costs involved with fighting during a pandemic and to pay for nearly four weeks in isolation. Carman and Estephan acknowledge that lesser-known fighters often can’t afford to take three weeks off their day jobs for the sake of a boxing match. 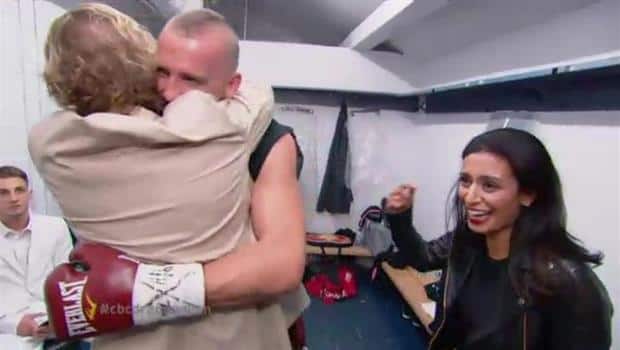 An update on Dillon Carman’s boxing career after he hooked some Dragon investment. 1:51

As a result, the Canadian fighters we’ve seen in action outside the country during the pandemic have tended to be established veterans who command larger paydays. Toronto’s Sam Vargas lost to fast-rising U.S. prospect Vergil Ortiz in California, in the main event of a card streamed on DAZN, and Montreal’s Mikael Zewski lost to rugged contender Egidijus Kavaliauskas in the main event of an ESPN card in Las Vegas.

Promoters say fights like those – that appear on wide-reaching platforms with big-money backing – will need to become more common for Canadian boxers if ongoing COVID-19 concerns force promoters to rule out selling tickets.

Saturday’s card will stream at PunchingGrace.com, the subscription site Estephan’s company set up to deliver live and archived fights. Without ticket sales, Estephan says promoters need to diversify the ways they deliver their product, and find ways to convert on-line viewers into long-term customers.

“It’s impossible to survive without a stream of revenue from TV or OTT [streaming],” Estephan said. “As long as people are watching on their phone or their iPad, you’re getting paid.”

Greg Norman back in hospital after testing positive for COVID-19