On the morning of the U.S. election, a Vancouver radio host asked Justin Trudeau what topped his list of cross-border concerns.

“Trade,” the prime minister said. “Continuing access to the American market, making sure we’re defending Canadian jobs, defending Canadian workers and ensuring a smooth flow of goods across the border, even in a difficult COVID period right now.”

His answer reflects what Canada no longer takes for granted.

“People identified with it,” said Andrea van Vugt, a former policy adviser to Stephen Harper and chief of staff to Conservative trade minister Ed Fast. “They believe that countries have been taking advantage of the United States for many years, including countries like China. And they voted for him and gave him a mandate to do something on trade. And he delivered.”

WATCH | Biden vowed to ‘make America respected around the world again’ in his victory speech:

In his first address as president-elect of the United States in Wilmington, Del., Joe Biden pledged to unite Americans and make the country ‘respected around the world again.’ 14:30

Trumpism — which could persist, even after his presidency — feeds and sustains itself by reaching into the Democrats’ lunch pail.

American labour leaders like Richard Trumka found common cause with this Republican president. Even though president-elect Joe Biden did well in industrial heartland states like Michigan and Pennsylvania this time, it’s unclear that massive numbers of these left-meets-right voters have returned to the Democratic fold.

That failure to win back what used to be the heart of the Democratic base is only one of the hard dilemmas emerging for Biden’s transition team.

For starters, it may need to focus on other fires Trump leaves burning in his wake.

“I think that the world has changed so much as a result of COVID that what I believe the president is going to be speaking about for the next four years is not going to be trade,” van Vugt said. “I don’t believe that it is going to be the dominant focus of a Biden presidency.”

Should that make its biggest trading partner worry about being neglected, or sigh with relief? Canadians who found Trump’s trade assault stressful might welcome the reprieve.

The NAFTA renegotiation sucked up much of the Trudeau government’s bandwidth. Implementation issues remain, especially for the automotive sector, where new rules kick in this winter. But it’s unclear how much political capital Biden will want to spend making Trump’s deal a success.

Trade irritants could be hard to fix if they’re buried under the incoming administration’s other agenda items this January.

Democratic ambitions to flip the Senate haven’t been fulfilled. Not yet, at least.

This matters for trade issues. As Canadians learned during the NAFTA negotiations, the U.S. Congress calls the shots on trade files, including treaty ratification.

Had there been a massive blue swing, Biden might have reached out to the populist left by nominating a protectionist trade representative. Now, the odds of a deeply-split Senate confirming any cabinet secretary who’s off-centre seem slim.

While politicians come and go in Washington, the influence of powerful, well-funded industry lobbies remain.

The U.S. Lumber Coalition that successfully hammers Canada’s softwood lumber industry with round after round of tariffs isn’t going anywhere. No U.S. Congress or administration has ever answered Canada’s call for free trade in forest products. Successful arbitration has never led to a permanent fix.

The steel and aluminum lobbyists may miss ex-steel executive Robert Lighthizer as the U.S. trade representative, but the number of vulnerable jobs in their industries maps handily over several battleground states.

The best Canada can hope for is a greater willingness to wall off North America as an integrated continental market, instead of policies that fortress U.S. plants alone.

The Americans have been able to maintain a punitive strategy to China while still advancing and securing key American interests. The rest of us haven’t.– Carlo Dade, Canada West Foundation

“Buy America” rules that shut out foreign bidders on procurement contracts aren’t going away either.

The Obama administration offered Canadian companies an exemption, and there’s a case for that again under NAFTA. But van Vugt said she thinks we should be cautious about extrapolating from the Obama years just because Biden was vice-president at the time.

“He has his own mind. He’ll make his own decisions,” she said.

Then there’s the omnipresent farm lobby.

Rural America did not hand Biden the White House. The billions in subsidies that keep American farmers afloat were integral to Trump’s re-election strategy. Congress is unlikely to turn off the subsidy tap.

There are similarly slim-to-nil odds of the U.S. suddenly backing off its hardball pursuit of new international markets for the surplus farm products those subsidies enable.

Nobody expects to wake up on Jan. 20 to a sudden a change of heart on Canada’s restrictive dairy, egg and poultry marketing boards.

WATCH | What Canada can expect from a Biden presidency:

The COVID-19 pandemic enabled China to use its massive economic power to exert geopolitical influence, forcing trading partners to either overlook its human rights violations or risk losing critical supply chains and financing.

In this climate, van Vugt said, it would be a “strategic error” for Biden to back off on China. As damaging as bilateral brinksmanship and tariff wars are for other trading partners like Canada, Trump’s agenda was “badly needed” she said.

If Biden retreats now, she said, “China will view it as a sign of weakness.”

“The whole world has to just accept that that horse is out of the barn, down the road and at Dairy Queen having a milkshake right now,” said Carlo Dade, director of the trade and investment centre at the Canada West Foundation.

“The Americans have been able to maintain a punitive strategy to China while still advancing and securing key American interests. The rest of us haven’t.

“I don’t see any way Biden can back down and tell U.S. farmers, ‘Hey you sucked it up under Trump for two years and you finally won something, and now I’m going to hand it back because it wasn’t fair to our allies.'”

Canadian canola, beef and pork exports have paid the price for Canada co-operating with the U.S. in pursuit of Huawei executive Meng Wanzhou’s business practices.

Dade sees parallels with the tensions of the 1950s, when Canada-U.S. relations were strained by their simultaneous competition for the Chinese grain market and cooperation on Cold War security issues.

The Canadian one is probably not the biggest binder on that desk.– Former Harper adviser Andrea van Vugt

Because Amercians chose to “bleep themselves” and leave the Trans-Pacific Partnership — the 12-member Pacific Rim trade agreement negotiated by the Obama administration as a strategy to balance and restrain China’s economic power — Biden’s now in a bind, Dade said.

“The language around the TPP has become poisonous from the left and from the right in the U.S.,” he said. There’s no room for centrists “when they’re taking it from both sides.”

Trump had to drag former TPP partners like Japan to the table to cut a bilateral deal to prevent other members like Canada from eating into U.S. export markets with their new tariff advantages. If Biden revisits this, “you can imagine how that’s going to play in Dubuque, in Des Moines (Iowa) and every other industrial and farm exporting community,” Dade said.

WATCH | Biden’s victory was met with jubilation but also anger: 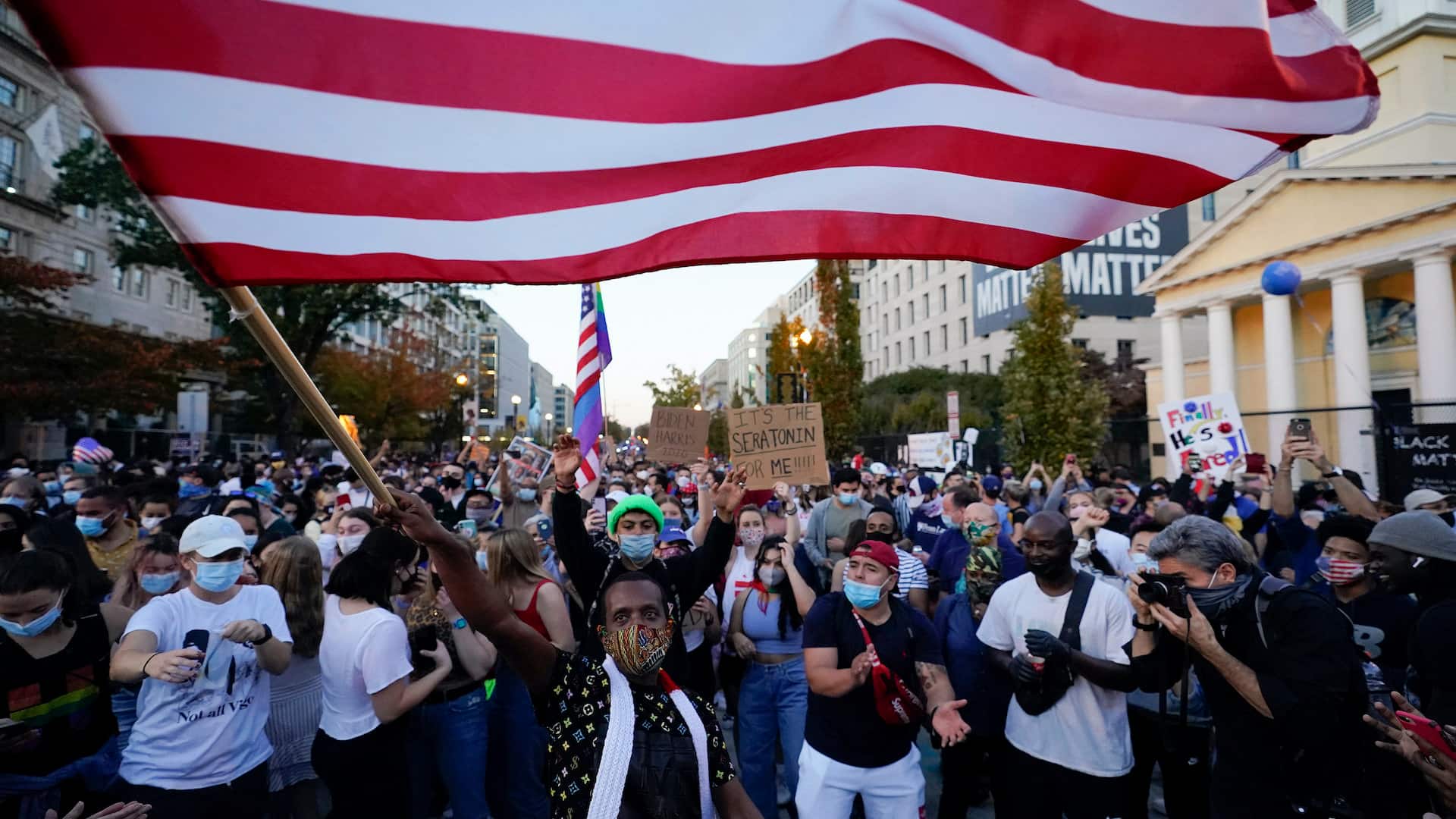 Voters gathered in cities across the United States to celebrate and decry the election of Joe Biden as president. 4:43

“I think everyone is expecting, if you have a Biden presidency, that you will see a difference in tone from the previous administration on basically every issue,” said van Vugt. “They are two very, very different individuals with very different styles.”

Ottawa feted and embraced Biden on his way out the door in late 2016, and the Trudeau government may be counting on at least some of that warmth persisting, even if the pandemic prevents an early bilateral visit to showcase the relationship.

“The reason people elected [Biden] had nothing to do with Canada,” van Vugt said. “If you can imagine the briefing binders that sit on a president-elect’s desk … your desk would break under the weight of those binders. The Canadian one is probably not the biggest binder on that desk.”

In Biden, global partners hope they’ll find a president who retains some muscle memory of American leadership on the international stage. More respect for rules and norms would have a calming effect on multilateral institutions like the World Trade Organization.

WATCH | How he got here: The life and political career of Joe Biden:

President-elect Joe Biden started out in Scranton, Pa., and has experienced tragedies and triumphs in his long journey to the White House. 3:03

While work will be required to rebuild trust, “people desperately want the U.S. back,” Dade said. “I think he’ll get a welcome, a warm seat at the table and a nice cup of coffee when he sits down.”

But taking a seat is only the first step toward reform. The issues Trump went to war over at the WTO were also concerns shared by the Bush and Obama administrations: Americans believe China and other emerging economic competitors get too sweet a deal, and they disagreed with WTO approaches to trade law arbitration for years before things got so dysfunctional that the U.S. blocked any more appointments to the now-depleted appellate body.

The hope, Dade said, is that at least now the U.S. might engage constructively in the reform process and articulate what it wants to reform-minded partners like Canada.

“Then the negotiations begin, when the Europeans, the Canadians and others say, ‘Oh hell, no, we’re not going to do that.’ But at least the process will start,” he said.

“What I always fear in these conversations is everyone thinks all their problems will start to be solved immediately, when meanwhile, domestically, the Americans have a lot happening.”