Ahead of International Day of the Girl Child on Sunday, former interim Conservative leader Rona Ambrose says women and girls must continue to use their voices to speak up about gender inequality and injustice.

Before leaving politics in 2017, Ambrose spent 13 years as MP for the Sturgeon River—Parkland riding in Edmonton. During that time, she sat in former prime minister Stephen Harper’s cabinet and also served as the Opposition leader.

Ambrose led the charge in 2011 for the UN to dedicate a day to the celebration of girls worldwide. Her new book, The International Day of the Girl: Celebrating Girls Around the World, was released last month.

She spoke with Galloway about some of the challenges women and girls face in Canada, and what can be done to improve their lives.

Here is part of their conversation.

This annual event came about after you met a group of girls from around the world at the UN and they asked you to help them create a day to celebrate them and their lives. Nine years later, what would you tell them about what’s been accomplished in that time and where that movement is now?

It’s a huge thing to get a resolution passed at the United Nations. And of course, we all worked together … but it was them.

And so I say to them, good for you for speaking up, using your voice. You’ve created a global movement. It’s celebrated by dozens and dozens of countries around the world.

International Women’s Day … in some countries is not celebrated because it can be seen as political and controversial. And yet we’ve been able to open the door to celebrate International Day of the Girl and start to talk about those very rights that girls will grow into as women.

Here in this country, one of the stories, for example, in the book is that of a young Indigenous girl who’s fighting for a school for her community, and she succeeds by making her voice heard. If you take a look at the reality that girls are facing here in Canada, what does this country need to do to improve the situation of girls here?

We have a framework for rights in Canada, a legal framework, and we should all be very proud of that.

But … certain girls, Indigenous girls in particular, face a lot of discrimination.

And unfortunately, we see like what happened just this last week in Quebec [with Joyce Echaquan], that that still happens.

So what do we do? We have to acknowledge that. We have to face it, confront it.

Last month the government reintroduced legislation that you championed as a private member’s bill in 2017 that would make sure newly appointed provincial superior court judges get continuing education in sexual assault law. It’s been three years since this was proposed. Do you think that there is the will to make this happen?

There is. I mean, I’ve received support from premiers. There’s two provinces who have now introduced this law at the provincial level. We received support from all political parties in the House of Commons. Where we hit some headwinds is some judges quietly in the judicial community pushing back from behind the scenes, saying judges just don’t need this.

What does that tell you?

When it comes to racism, sexism, discrimination, there is unconscious bias in our systems and particularly in systems like the judiciary, in our court system. And we have to have training.

When you walk into the courtroom as a sexual assault survivor, you should have faith that the person overseeing your case actually at the least knows the law and applies it properly.

We’re talking in the midst of a pandemic and this economic downturn is being felt by people across the spectrum. But women in particular are feeling this. And people have called this, on this program and elsewhere, a she-cession. Do you think that what we’re in right now is a she-session?

I read an Economist article the other day that argued that just as many women and men have lost their jobs, so the she-cession isn’t real. And I would argue that is absolutely not true.

If you look at where jobs are being lost — in the retail and restaurants, accommodation, all of tourism, primarily occupied by women … those are the [kinds] of jobs that single moms end up taking. So they’re hit very hard. And [there] really doesn’t look like much of a reprieve in those areas of the economy.

Then you look at women who are in the corporate world who might have been able to hang onto a job, but now they’re at home trying to continue to advance, compete, promote themselves, to work up that corporate ladder, do all the right things. And now they’re at home, they’re home-schooling, they’re taking care of their parents that are stuck, that can’t get out of the house.

A lot of men, you know — don’t get me wrong — are doing a lot in their families. But the majority of care giving still falls to women.

If we’re in this right now and the crisis, as you said, doesn’t show any signs of abating, is the government doing enough to address those issues?

Governments across the board are doing what we need to do right now, which is to get money into people’s pockets and make sure that they have what they need to continue to put food on the table and keep shelter — all of those basic necessities.

But there’s going to be a point where we have to figure out: what do we do when all of the [formal] and informal structures fall away that usually supported women so that they could stay in the workforce?

Would a national child-care plan prevent that?

We do have daycare. We do have informal daycare with day homes and grandma and, you know, people that help us. But right now, because of the pandemic, all of those things are so tenuous. At any moment school could get closed down, daycare gets closed down.

I don’t think governments have fully acknowledged the impact this is having on women — the amount of stress, anxiety, the notion that women are saying they’re just going to quit their jobs because they’ve got to take care of their families.

I think our formal structures have got to be supported somehow, and that is daycare and the school system. Women rely on that a lot so they can continue to work, because we can’t rely on grandparents because they’re too exposed to the virus.

What would you say to … girls around the world as the International Day of the Girl arrives in a really difficult year?

Well, I think to do the things that they do in this book. There’s nine stories of nine girls who face really difficult issues: illiteracy, discrimination … early childhood marriage. And they use their voice to speak up about those inequalities and those injustices. And they make a difference.

CRA sent 441,000 ‘education letters’ to Canadians who may have to repay CERB benefits 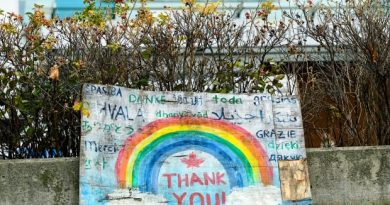