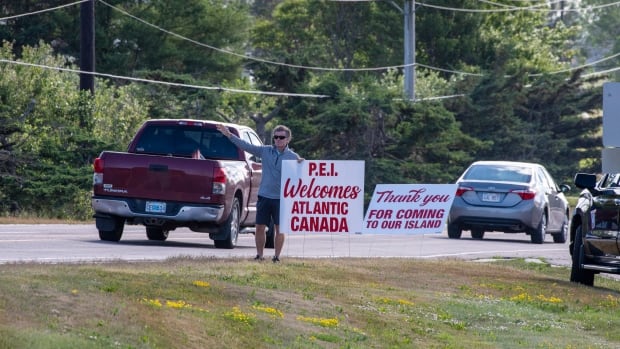 As the second wave of the COVID-19 pandemic continues to hit many parts of the country, provinces that were quick to act with strict containment measures have been more successful in limiting the spread, a CBC News analysis has found.

Using data from Oxford University that tracks provincial government responses to the contagion, we see within Canada a trend that has been observed in other countries: when authorities are slower to respond to a rise in new cases, it becomes more difficult to bring the spread under control.

“It’s not just about the public health measures. It’s also the timing of implementation of those measures. The timing is one of the most crucial factors,” said Saverio Stranges, professor of epidemiology and biostatistics at Western University in London, Ont.

After nearly 10 months of pandemic and two waves of infection, the data tells a clear story. Provinces that remained vigilant, particularly those in Atlantic Canada, avoided major outbreaks, while some that dropped their guards have struggled to contain surging case rates.

The ‘false self-confidence’ of the Prairies

Take, for example, the approaches and outcomes of Alberta and Manitoba, both of which have been hit by strong second waves of COVID-19.

The animation below compares the provinces’ COVID-19 containment measures with their weekly case rates since September. Alberta waited to impose strict measures as its cases rose, spiking to the highest per-capita case rate in Canada so far.

Manitoba, on the other hand, was quicker to react, and its COVID-19 case numbers plateaued sooner.

A note about Nunavut: because of its small population (less than 40,000 people), even small numbers of new COVID-19 cases appear as dramatic spikes when compared to other provinces.

“Alberta and Manitoba didn’t struggle in the first wave so much, and that set them up with a little bit of false self-confidence that they had it well in hand with very limited measures,” said Colin Furness, an infection control epidemiologist at the University of Toronto.

“They should have been terrified about what happened in Quebec during the first wave. That’s what the Atlantic provinces did. They looked at it and they said, ‘Good God, we could be just like that.'”

In July, Nova Scotia, New Brunswick, P.E.I., and Newfoundland and Labrador created a bubble around the region that restricted travel from outside provinces. Those who lived within the Atlantic bubble could travel relatively freely, but outsiders were screened when entering and had to quarantine for 14 days. The agreement was suspended in late November as COVID-19 cases increased in Nova Scotia and New Brunswick.

Experts interviewed by CBC News cautioned that there are significant limitations to making any direct comparisons between provinces, partly because there can be vast differences between factors such as health systems and population traits.

For example, outbreaks were more common in more populated areas, so provinces with smaller population centres had an easier task, Furness said.

“It’s not a level playing field,” he said.

Although COVID-19 can spread in rural areas, it needs a superspreader event to really take off, he said.

The chart below shows how strict provinces were in terms of a few select containment measures, according to the Oxford data. The darker the orange, the stricter the rule. Click here for a complete description of each measure.

And there are other differences between provinces that make direct comparisons tricky, Stranges said, including mobility, geography, access to public health facilities, demographics, and the standards within long-term care facilities.

Tighter measures in 1st wave despite higher numbers in 2nd

The Oxford data also reveals a curious pattern: across all provinces, measures to control the spread of COVID-19 were more stringent in the first wave, even if case loads were lower.

Because it was a new coronavirus whose severity was not fully understood, it made sense to slam the brakes, Furness said.

“In Ontario, we were fining people for sitting by themselves on park benches in March. That’s ludicrous,” he said. “We didn’t know much about how it spreads. We knew that it was potentially massively deadly and we were frightened. What was driving the restrictive measures in March was an abundance of caution.”

But, as the pandemic wore on, provinces also needed to deal with a frustrated public and increasing pressures from the economic sector, Stranges said.

“So, you need to also compromise what is acceptable, because we know that people get tired, especially in our Western societies where people care about their individual freedoms,” he said.

Some provinces tried targeted approaches as cases cropped up in certain settings. Manitoba, for example, restricted travel to vulnerable northern communities for periods in April and September, and barred visitors from care homes in March. But the window for using such approaches effectively can close pretty quickly, said Cynthia Carr, an epidemiologist and founder of EPI Research in Winnipeg, a firm that provides COVID-19 planning services.

“The problem is, with a highly interconnected and interactive society, those targeted approaches became less and less effective as community spread continued,” she said.

Malgorzata Gasperowicz, a developmental biologist and general associate in the faculty of nursing at the University of Calgary, described provincial preparations for the second wave as “flirting with the virus,” as some regions across Canada slowly implemented measures piece by piece instead of using the swift lockdown approach seen in response to the first wave.

Ontario, for example, started with targeted restrictions in certain cities at the beginning of October. But the case numbers continued to grow, and by Oct. 25, the province reported more than 1,000 new cases in a single day.

The government then introduced a new rating system and corresponding set of restrictions for municipalities. Toronto and Peel Region were placed in the lockdown stage on Nov. 23. They were eventually joined by York Region, Windsor-Essex and Hamilton, but cases continued to climb. The Ontario government eventually announced a provincewide lockdown starting on Dec. 26.

Gasperowicz said another factor that contributed to the severity of the second wave in many parts of the country was how quickly some governments lifted restrictions when the numbers started to improve following the first wave.

“The lifting of restrictions is really an essential thing, and it’s why we are in a second wave,” she said, citing the success of the Atlantic bubble and similar efforts in Australia, where restrictions remained in place until daily case counts were down to zero and community transmission was eliminated.

“We know that Atlantic Canada did the best job. Their most stringent measures weren’t lifted before they reached zero new daily cases.… Everybody else opened too early, and then you started to grow again. Slowly, but the growth was everywhere.”