This column is an opinion by Mustafa Farooq, a lawyer and the CEO of the National Council of Canadian Muslims. For more information about CBC’s Opinion section, please see the FAQ.

This week, days before the fourth anniversary of the Quebec City mosque shooting, a motion passed unanimously in the House of Commons calling for the government to “use all available tools to address the proliferation of white supremacist and hate groups,” and to list the Proud Boys as a “terrorist entity.” A clear signal is being sent that action needs to be taken – but much more needs to be done.

The motion, which is now being considered by the government, was a vindication of the many Canadians who came together in the fall of 2020 to demand the introduction of a bipartisan national action plan to dismantle white supremacist and neo-Nazi groups that operate in Canada.

Keep in mind that these Canadians gathered together, and achieved important commitments from our government leaders, well before the events at the U.S. Capitol in Washington, D.C. And there is an important reason why.

The riot at Capitol Hill this month prompted routine warnings of how Canada shouldn’t feel immune to the violence of white supremacy and racist populism. “It could happen here!” we’re told again and again. This tiresome cliché overlooks how Canada is already sick with the disease of violent white supremacist groups.

That fact won’t be clear to those who refuse to see these past few years through the eyes of their Muslim neighbours, many of whom know that our government should be doing more to fight against alt-right organizations.

The attack in Toronto last year in which a mosque caretaker named Mohamed-Aslim Zafis was stabbed to death by a man apparently connected to a neo-Nazi occultist group made few headlines. The suspect reportedly has links to the Order of the Nine Angles (O9A), a deadly neo-Nazi organization. Our community hasn’t stopped reeling since.

In fact, most of us haven’t gotten over the killing of six Muslim worshippers inside a Quebec City mosque in 2017.

And this past summer, mosques in downtown Toronto and Edmonton were vandalized repeatedly, with smashed windows and graffiti. 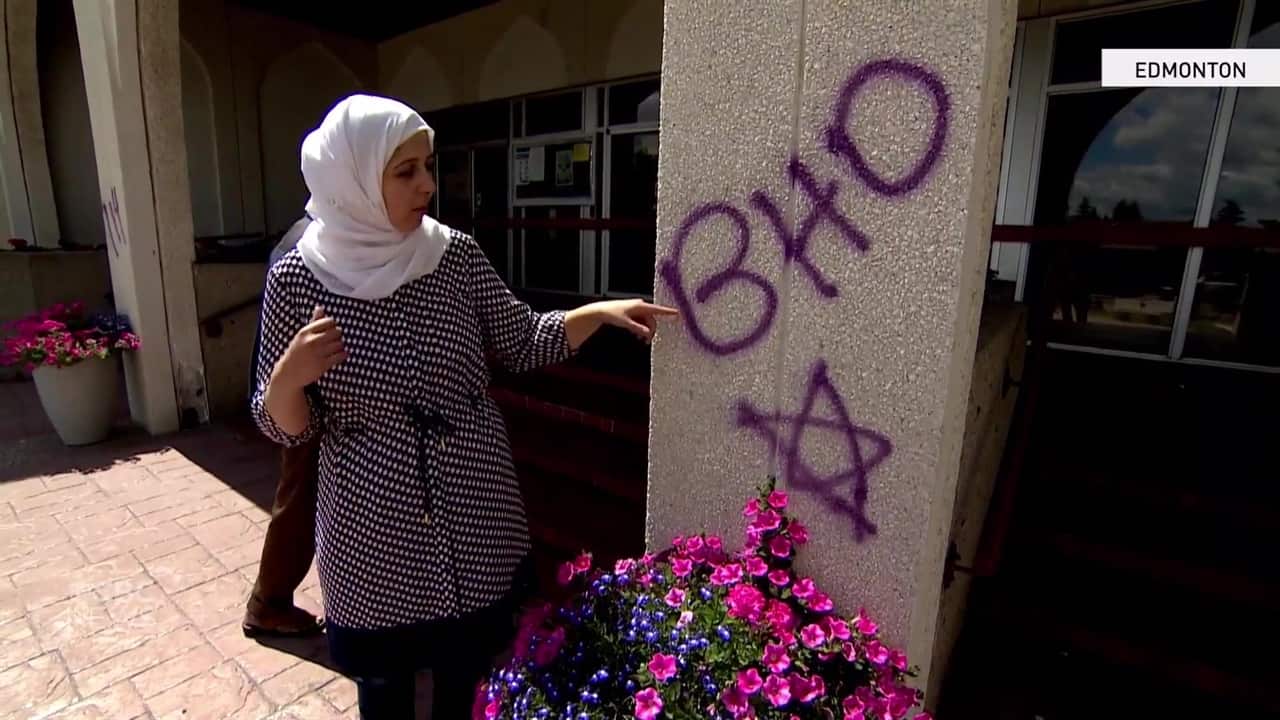 The Edmonton Police Service’s hate crime unit is investigating after the Al Rashid Mosque was spray painted with racist graffiti on the weekend. 1:52

The fear, trauma, and dread become more acute when we witness racist, militarist groups like the Three Percenters spewing hate against Muslims in Canada. Their Islamophobic members train with firearms and stake out mosques. Then there’s The Base, another neo-Nazi militia with its fair share of participants in Canada, including in the military. The list goes on and on.

What are we supposed to do about this?

The solution means taking a comprehensive approach, informed by a strong emphasis on civil liberties, to dismantle white supremacist organizations.

The Muslim community, among many others, has had its criticisms of our country’s anti-terror legislation (and to be clear, we are not proposing an expansion of that legislation). But as long as these laws are around, provisions under the Criminal Code such as section 70, which can be used to ban militia groups, could be used to dismantle hate groups so that they can’t physically plan or organize.

In 2019, for example, Canada added a pair of white supremacist and neo-Nazi groups — Blood and Honour, and Combat 18 — to its list of terrorism organizations for the first time.

Furthermore, as these organizations continue to operate, it becomes clear that we need to ask how our national security agencies have failed Canadians by refusing to deal with the challenge of white supremacy.

The holes in our anti-terror and national security infrastructure point to the need for a full and transparent review. How have our agencies been fighting white supremacist hate groups? And has their focus on the Muslim community, the environmental movement, Indigenous folks, and other racialized communities allowed a pernicious threat to grow unabated?

Then there are the clearly anti-immigrant and often violent groups such as Soldiers of Odin, which physically patrol city streets in search of “criminal immigrants.” It is critical that we develop new legislative approaches, whether criminal or regulatory, that are specifically designed to identify white supremacist groups as white supremacist groups.

It is also important to ensure that civil liberties groups are consulted on how to combat the issue of white supremacists organizing and communicating online.

Alexandre Bissonnette was exposed to Islamophobia online and browsed sites linked to white supremacists before he killed six people and injured 19 others at the Islamic Cultural Centre of Quebec City on Jan. 29, 2017. We need new, up-to-date laws that are balanced and constitutionally sound to disrupt far-right extremist forums, social media platforms, and online chat rooms.

Mosques and other institutions that have been targeted need help with security and protection, as well. They are eligible to receive funding through Public Safety Canada’s Security Infrastructure Program (SIP), but the process is slow. Months go by before funding is received to build new gates, put in cameras, and build a security infrastructure. Instead, the program should provide rebates after the work is done.

Canada’s Muslim community is not the only one asking these questions. These common-sense ideas have broad support across many communities, particularly racialized ones. While many groups raise valid concerns about the reach of anti-terrorism legislation and have questions about freedom of speech issues, we believe that many Canadians, regardless of community and as indicated by the unanimous consent motion in Parliament, are on the same page regarding white supremacist organizations.

There’s a broad consensus among Canadians that we need to act. The unanimous consent motion in the House of Commons on the eve of the anniversary of the Quebec City mosque shooting demonstrates that. All eyes are on our MPs and officials to follow through.