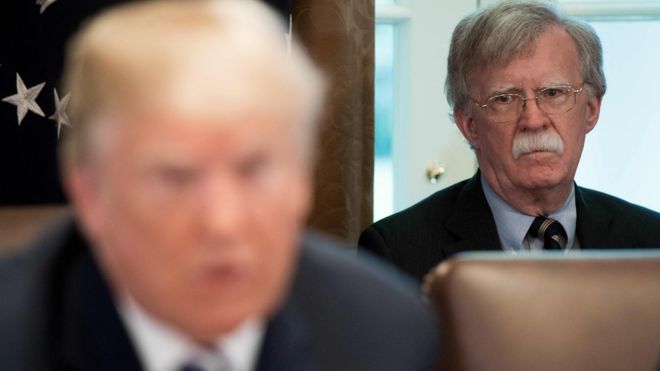 The US Department of Justice launched a criminal case after failing to stop the publication of The Room Where It Happened book.

Mr Bolton denies all the accusations.

In the book, Mr Trump is depicted as a president ignorant of geopolitical facts.

Mr Bolton, who served as MrTrump’s national security adviser in 2018-19, also alleges the president’s decisions are driven by a desire for re-election

At the time of publication, President Trump made it clear that he wanted his former aide prosecuted, describing him as “grossly incompetent” and “a liar”.

The case would focus on Mr Bolton’s claim that his manuscript had passed through a pre-publication national security review, and claims by critics that it did not complete that review.

A grand jury convened by the Department of Justice has now formally issued subpoenas to the Simon & Schuster publishing company and the Javelin Agency, which represents Mr Bolton.

In a statement, Mr Bolton’s lawyer Charles J. Cooper said: “Ambassador Bolton emphatically rejects any claim that he acted improperly, let alone criminally, in connection with the publication of his book, and he will cooperate fully, as he has throughout, with any official inquiry into his conduct.”

What does the book say about President Trump?

Many of Mr Bolton’s allegations are based on private conversations and are impossible to verify.

Among them are the following claims:

Just days before the book’s publication, President Trump said the book was “made up of lies and fake stories”.

“Many of the ridiculous statements he attributes to me were never made, pure fiction. Just trying to get even for firing him like the sick puppy he is!” Mr Trump said in a tweet.

Rideau Hall spent over $110,000 on legal fees in response to bullying, harassment claims

Governments with rookie leaders don’t always have it easy in N.L. elections