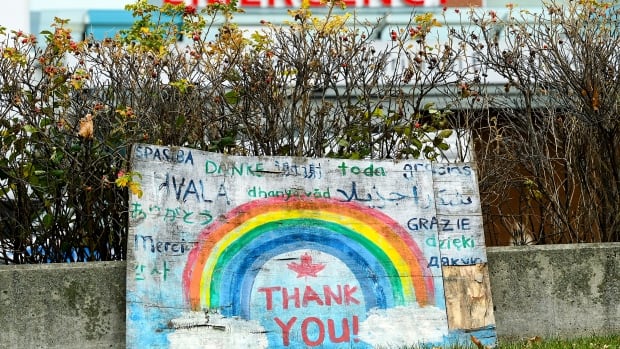 The top doctor on Ontario’s COVID-19 scientific advisory committee says the province could face up to 40,000 new cases each day by the end of February if a virus variant that originated in the U.K. takes hold.

Dr. Peter Jüni told CBC’s The House in an interview airing Saturday that caseloads could double unless people take the current lockdown seriously and stay at home.

“We could end up in this situation where we have, you know, [30,000] to 40,000 cases a day easily” because the variant is so much more infectious than the original strain, he said.

Ontario imposed a second state of emergency this week and ordered the shutdown. That decision came three weeks after Jüni’s scientific advisory group released a report that said earlier efforts to slow the pandemic’s spread were not working.

“You know, somebody told me that I actually didn’t sound as calming as I typically would be, that I was relatively alarming,” Jüni told CBC News.

Dr. Peter Jüni, part of a scientific team that advises the Ontario government, examines the threat posed by the coronavirus variant first discovered in the U.K. 11:40

‘Everybody will need to help now’

“To be really clear here, this is the single most scary thing I’ve seen as an epidemiologist since the beginning of the pandemic. We need to be very careful. And everybody — I just need to repeat that, I sound like a broken record — everybody will need to help now. We can’t be complacent here.”

Jüni’s warning is more pessimistic than earlier national modelling released this week by the Public Health Agency of Canada (PHAC), which suggests that the number of daily COVID-19 cases could more than triple to 30,000 if people increase their contacts during a time of widespread community transmission.

That report also projects that if Canadians simply maintain their current levels of contact with people outside their households, case counts will still rise to roughly 13,000 a day from 7,900 now.

The new variant alarming Jüni isn’t the only new strain now in Canada. This week, British Columbia detected a single case of another mutation of the virus that originated in South Africa. The province also has confirmed a handful of cases of the new strain linked to the U.K.

B.C. Health Minister Adrian Dix said those cases turned up through the extensive contact-tracing and testing being conducted by public health officials.

“So the good news is, in the case of the South African variant, that the person in question had not travelled internationally and we believe has not transmitted the variant themselves,” Dix said in a separate interview with The House.

“But obviously, we are concerned as to how the person developed and got the virus. So we’re doing extensive contact-tracing and trying to work that out. It’s a matter of concern … with people in hospital and, obviously, the impact of COVID-19 on long-term care. Everything that might further transmission is a source of concern while we’re rolling out the early stages of the immunization plan.”

Given the limited supply of vaccines — and the expectation that there won’t be enough to vaccinate everyone who wants one until September — provinces are considering extraordinary measures to both slow the spread of COVID-19 and to ration scarce hospital space.

B.C. is getting legal advice on whether it can close its borders to Canadians from other provinces engaging in non-essential travel. A decision is expected next week.

“We’ve got very large, long borders between B.C. and Alberta and … the Yukon, for example,” Dix said when asked why the province is looking at creating the kind of “bubble” the Atlantic provinces imposed last spring.

B.C. Health Minister Adrian Dix discusses the possibility of an inter-provincial travel ban and cases of two variants of the coronavirus in the province. 9:08

B.C. so far hasn’t suffered the same pressure on hospital capacity experienced by Ontario and Quebec. Both of those provinces are now preparing triage plans to determine which patients will be given priority access to critical care beds as the pandemic causes hospitalizations to soar.

The emergence of variant strains is driving fears about hospital system collapse. Dr. Jüni said the roughly 22 cases of the new variant reported in Canada so far represent “the tip of the iceberg” and underscore the need to plan for a sharp increase in cases — and for Canadians to respect the stay-at-home order.

Jüni acknowledged that growing pandemic fatigue makes it hard for political leaders. He said Premier Doug Ford and the province’s health minister are listening to scientific and medical advice.

“I wouldn’t like to be an elected politician in the current situation. Let’s really face it. This is challenging for everybody. Nobody has been there before,” he said.

“What I see is … since we started this in the middle of July, that we have actually an excellent collaboration with our colleagues from the ministry and also with elected decision makers and that this is working.”

Now, he said, it’s up to the public to do its part during what he conceded will be a “harsh shutdown” for the next month in Ontario.