He used the midday speech to a largely business audience to say that how the country creates wealth needs to be reframed, or else “less reasonable” forces will do it instead.

“Too much power is in the hands of corporate and financial elites who are happy to outsource jobs abroad,” O’Toole warned the Canadian Club of Toronto, according to his text.

“It’s now expected of a shareholder to ask a CEO: ‘Why are we paying a worker in Oshawa $30 an hour when we could be paying one in China 50 cents an hour?’ And while that shareholder gets richer, Canada gets poorer.”

O’Toole blamed the Liberals for favouring elites over workers, trade deals over domestic jobs. The Opposition leader gave the broad strokes of how the Tories would tackle an economic divide widened by the pandemic, with higher-income earners faring better than low-wage workers.

O’Toole said government policy should focus on building “solidarity,” not just wealth, and talked about the need to intervene in the economy when good outcomes aren’t shared, or when it was in the national interest.

He also a mirrored a call from Liberal Finance Minister Chrystia Freeland, for ongoing aid to combat the health and economic crisis brought on by COVID-19.

“I don’t like deficits. But the alternatives were much worse. We had to do what needed to be done,” O’Toole said.

“This is not something I would support in normal times. But we are facing more than a health crisis. We are facing the greatest economic crisis of our lifetime.”

Watch: O’Toole explains his policies today from Stornoway, his official residence in Ottawa: 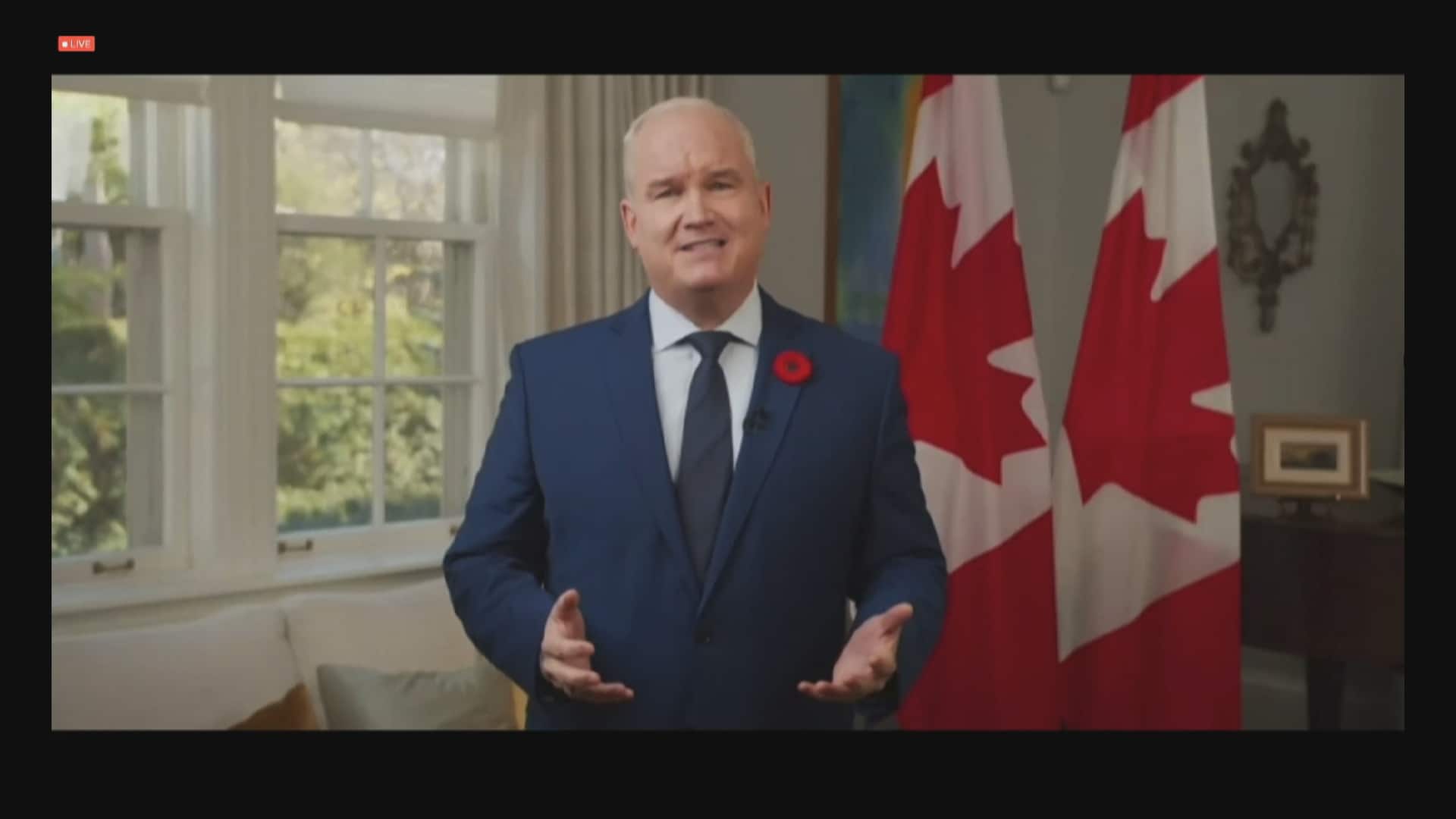 Conservative Leader Erin O’Toole explained some of his policies today in a speech from Stornoway, his official residence in Ottawa. 2:23

In the question-and-answer session after his speech, O’Toole added that he doesn’t support the depth of the deficit the Liberals have created.

Freeland’s department produced an update Friday on how much the federal government has borrowed to supply that aid so far.

The federal deficit hit $170.5 billion through the first five months of the government’s fiscal year. The deficit figure from April to August compared to a $5.2-billion deficit recorded in the same period one year earlier, thanks to billions of dollars in spending on emergency aid.

The monthly fiscal monitor from the Finance Department showed the Canada Emergency Response Benefit payments at $58.8 billion and the federal wage subsidy program at $37.4 billion over the five-month stretch.

A further $19.2 billion in spending over that time included money for a business loan program the Liberals have since widened and a rent-relief program for businesses the government plans to revamp.

The deficit numbers landed just after Statistics Canada reported the pace of economic growth slowed in August, and offered a preliminary estimate that it had slowed further in September.

If the figures hold, the growth in gross domestic product for the third quarter would be about 10 per cent.

“That should be our approach, growing the GDP, having more people working, and getting a balance to our fiscal situation — a balance over the next decade — ramp down program spending in a way that’s fair and equitable,” O’Toole said.

“If people aren’t working when they come off CERB, we’re going to see a prolonged debt crisis in Canada, and we’re gonna see more capital leave our country rather than come to it.”

The Canada Emergency Response Benefit was the Liberal government’s $500-a-week relief payment to people who lost work in the first months of the pandemic.

Its replacement, known as the Canada Recovery Benefit, has paid out $1.48 billion to over 917,000 people since it launched. A further $1.15 billion has been paid in EI benefits among the nearly 1.6 million claims approved out of the 1.8 million claims filed.

The figures provide a partial view of the labour force ahead of next week when Statistics Canada will release the unemployment rate for October. The rate was nine per cent in September.

Freeland, in a speech of her own to Montreal’s chamber of commerce, said the Liberals will soon introduce legislation to provide more economic aid, including extending the wage subsidy to next summer, and help for businesses subject to lockdown orders.

“We urge all parliamentarians to join us in approving these critical measures,” she said, noting the support for income-support changes enacted last month.

“I hope we can all take the same Team Canada approach with these support measures for our small businesses.”

Biden pledged to work with Canada on ‘Buy American’ during call with Trudeau, official says