When one starts asking questions about the experience of Black Canadians during the Second World War, it doesn’t take long to land on the name Allan Bundy.

That’s because at a time when the Canadian Armed Forces is promising to crack down on systemic racism, as well as individual acts of discrimination in the ranks, Bundy’s story speaks to both.

He was one of many Black Canadians who had to overcome discrimination and racism to fight during the Second World War, says Canadian War Museum historian Andrew Burtch.

His story also highlights the long presence of racism in the Canadian Armed Forces, even as it strives today for more diversity, including by promising to end hateful conduct in the ranks.

“One of the top bullets in the most recent Canadian defence policy is looking at leveraging the diversity of the country as a strength and creating better circumstances to allow for that to happen, which would include making sure that people are supported,” Burtch said.

“Obviously there wasn’t that support before.”

Bundy was 19 years old when he and a white friend named Soupy Campbell went to the Halifax recruiting centre to join the Royal Canadian Air Force (RCAF) as pilots. It was late 1939, Germany had just invaded Poland, and Canada and its allies were mobilizing their militaries after declaring war on the Nazis.

When Bundy and Campbell walked out, however, only Soupy had been accepted to join the RCAF. Bundy, according to the stories, felt like he had been rejected because of the recruiting officer’s own racist attitudes. Such incidents had been common during the First World War, in which Bundy’s own father had served in Canada’s only all-Black unit, the No. 2 Construction Battalion.

What Bundy didn’t know at the time was that the entire RCAF, as well as the Royal Canadian Navy, were quietly barring Black and Asian Canadians from all but the most general positions. The policy wasn’t publicized, but most jobs could only go to British subjects who were white or of “pure European descent.”

When conscription was introduced a few years later, the Canadian Army came calling for Bundy. But he wanted to fly, and he wasn’t afraid to say it when an RCMP officer visited a short time later to ask why he hadn’t responded to the Army’s summons. 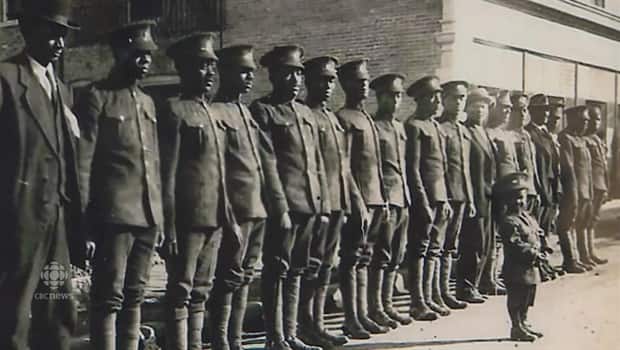 No. 2 Construction Battalion was Canada’s first and only segregated military unit. Nearly half of the battalion’s 600 members were from Nova Scotia. 1:17

Soon afterward, Bundy visited the recruiting station again. By now, because of a shortage of trained pilots and aircrew, the RCAF had started to open its doors to Black Canadians and others.

Even after being accepted and trained, Bundy faced a new form of discrimination. None of the white navigators wanted to serve on his Bristol Beaufighter.

It was only after a sergeant by the name of Elwood Cecil Wright volunteered that Bundy became the first Black Canadian to fly a combat mission during the war.

During their first mission, the two sunk a pair of enemy ships off the coast of Norway. They would fly 42 more missions together before the war ended and Bundy returned home to Halifax.

The Canadian War Museum credits Bundy and dozens of other Black Canadians who served with the RCAF during the Second World War as having helped “change attitudes toward visible minorities in the military, and in Canadian society.”

Kathy Grant is the founder of the Legacy Voices Project, which seeks to share the stories of Black Canadians who served during the two world wars. One of those was Grant’s own father, Owen Rowe, who travelled to Canada from Barbados to volunteer for the Second World War and asked her to start the memorial project.

Grant believes the war helped pave the way for more rights and freedoms for Black Canadians.

Some such as Lincoln Alexander, who went on to become lieutenant-governor of Ontario, were able to take advantage of the benefits offered by Ottawa to veterans. Many also felt empowered to fight for those rights, and found allies in former comrades-in-arms who were white.

“They wanted things to change,” Grant said. “They were thinking: ‘Well, why are we fighting? Here it is, some of us are dying and they’re out of line by just denying us these rights.’ But it was a large shift for Canada as a whole.”

The irony of Black and Asian Canadians being discriminated against by the military at a time when Canada was fighting fascism and intolerance overseas has not been lost on historians and others over the years.

Veterans Affairs Canada does not have official records on how many Black Canadians served in the two world wars, though it estimates around 2,600 served in the First World War and several thousand more in the second.

It credits the latter with having returned home “with a heightened awareness of the value of freedom and their right to be treated as equals.”

That fight continues in some parts of the Canadian Armed Forces today.

Top defence officials apologized this summer for their slow response to questions about systemic racism in the military as the Black Lives Movement gathered momentum. They promised to take action.

They have also laid out a series of orders designed to get tough on hate in the ranks after several high-profile incidents involving service members associating with extremist groups.

The military has also made some progress in recruiting more visible minorities as part of a drive to become more diverse.

About 9.2 per cent of service members were visible minorities in January, up from 7.4 per cent three years earlier. The Forces’ target is 11.8 per cent of those in uniform. It also has targets for female and Indigenous representation.

Grant laments that the stories of Black Canadians in the military are not well known, but says there has been more attention in recent years, including as the Black Lives Matter movement highlights issues of systemic racism in the military and elsewhere.

“There’s so much negativity when it comes to members of our community,” she said.

“There’s so many stories of men that have gone on to great heights as a result of serving…So it’s sharing those stories. A lot of times, you don’t see a lot of members of our community featured in Remembrance Day. That’s starting to change.”

Here’s how Trump and Biden differ on U.S.-Canada trade tensions