Canada expects to have enough doses on hand next year to vaccinate every Canadian who wants a shot by the end of September, according to the Public Health Agency of Canada (PHAC).

The statement comes amid confusion over competing information released to reporters last week about vaccination timelines. Some federal documents distributed at a COVID-19 briefing last Wednesday suggested the inoculation campaign would be completed by the “end of 2021,” while other material pointed to the more optimistic September date.

Prime Minister Justin Trudeau himself has floated September 2021 as a date when a “majority” of Canadians might be inoculated. Dr. Howard Njoo, Canada’s deputy chief public health officer, has offered a different estimate, saying that the end of December 2021 would be more likely.

PHAC now says it believes Canada’s vaccine supply will be sufficient to allow all Canadians wishing to be vaccinated to get their shots by the end of September.

“Based on current data, by the end of Q3 2021, Canada projects having a sufficient number doses to be able to offer a vaccination to every Canadian,” a spokesperson for PHAC said in a statement to CBC News. The “Q3” refers to the third quarter of the calendar year — July, August and September.

Canada has signed purchase agreements with seven different pharmaceutical companies for up to 418 million doses of the various shots under development — an insurance policy against the possibility that some of the vaccines in development prove to be ineffective in clinical trials. Some supplies could also be donated to developing countries.

The September date is premised on the companies with which Canada has signed purchase agreements — Pfizer, Moderna, Medicago, AstraZeneca, Johnson & Johnson, Novavax and Sanofi-GlaxoSmithKline — securing regulatory approvals and meeting planned timelines for the delivery of doses, the PHAC spokesperson said.

“It is important to underscore that timelines for delivery of doses vary across the vaccine candidates and are dependent on companies’ abilities to scale up manufacturing, clinical trial timelines, results and subsequent regulatory filings,” the spokesperson said.

“Monitoring access to supply is one of the key elements that will contribute to Canada’s overall plan and, with this in mind, our stated goal of providing enough vaccines for all Canadians in 2021 is still accurate.”

Dr. Theresa Tam, Canada’s chief public health officer, told CBC News Network’s Power & Politics on Wednesday that while this week is very exciting because vaccines have arrived, Canadians should continue to respect public health guidelines while the  number of vaccines are being rolled out is so small.

“That’s going to ramp up, but it will ramp up fairly slowly for the first quarter,” Tam told host Vassy Kapelos. “So I think at this juncture, it’s really important that we keep up with public health advice and measures at the same time as we’re gradually ramping up the vaccination program.

“It will take quite a few months in order to vaccinate the majority of the population,” she said.

Tam said Canadians should remain especially vigilant because “this resurgence is actually more difficult to manage, perhaps, than the first wave.”

WATCH | Dr. Theresa Tam looks back on 2020 during this year-end interview: 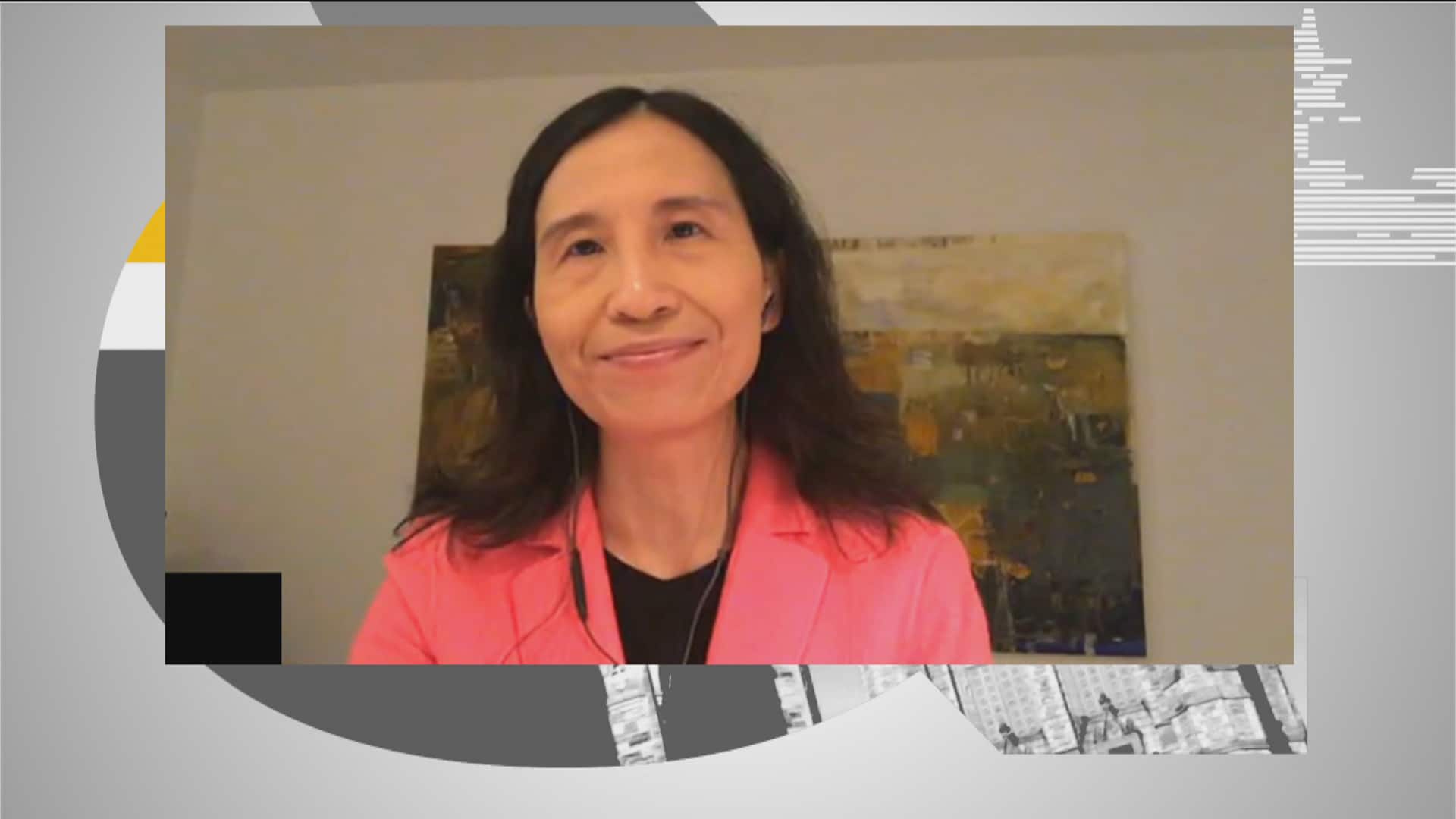 U.S. expected to vaccinate most Americans by June

The U.S. has said it expects to complete its mass inoculation campaign earlier than Canada.

Retired Lt.-Gen. Paul Ostrowski is the director of supply, production and distribution for Operation Warp Speed, the United States’ COVID-19 vaccine distribution mission. In an interview with MSNBC late last month, he said every American who wants a vaccine will be able to get one by June.

“One hundred per cent of Americans that want the vaccine will have had the vaccine by that point in time. We’ll have over 300 million doses available to the American public well before then,” Ostrowski said.

Dr. Moncef Slaoui, the chief science adviser to the U.S. vaccine mission, has suggested a similar timeline — but it depends on a drop in the current rate of vaccine hesitancy.

“Hopefully by the middle of the year, I hope most Americans will have been immunized, which means the level of hesitancy that exists currently will have been decreased because people will have learned more information … about the vaccine,” he said in an interview with the Washington Post.

The U.S. campaign will end earlier because it will receive more doses than Canada in the first quarter. Operation Warp Speed has secured 100 million doses of the promising Moderna product for the first three months of 2021 alone. Canada, by comparison, will receive about 2 million doses between January and March.

The Pfizer product was approved last week for use in Canada and federal regulators are now reviewing applications from Moderna, AstraZeneca and Johnson & Johnson’s pharmaceutical division, Janssen.

The provinces began vaccinating some health care workers and long-term care residents with the Pfizer vaccine this week. Trudeau announced Tuesday that 168,000 doses of the Moderna shot are expected to be available in Canada by month’s end.

Maj.-Gen. Dany Fortin, the military commander in charge of Canada’s vaccine logistics, said Wednesday that the distribution of Canada’s early supply of the Pfizer product has gone smoothly so far. 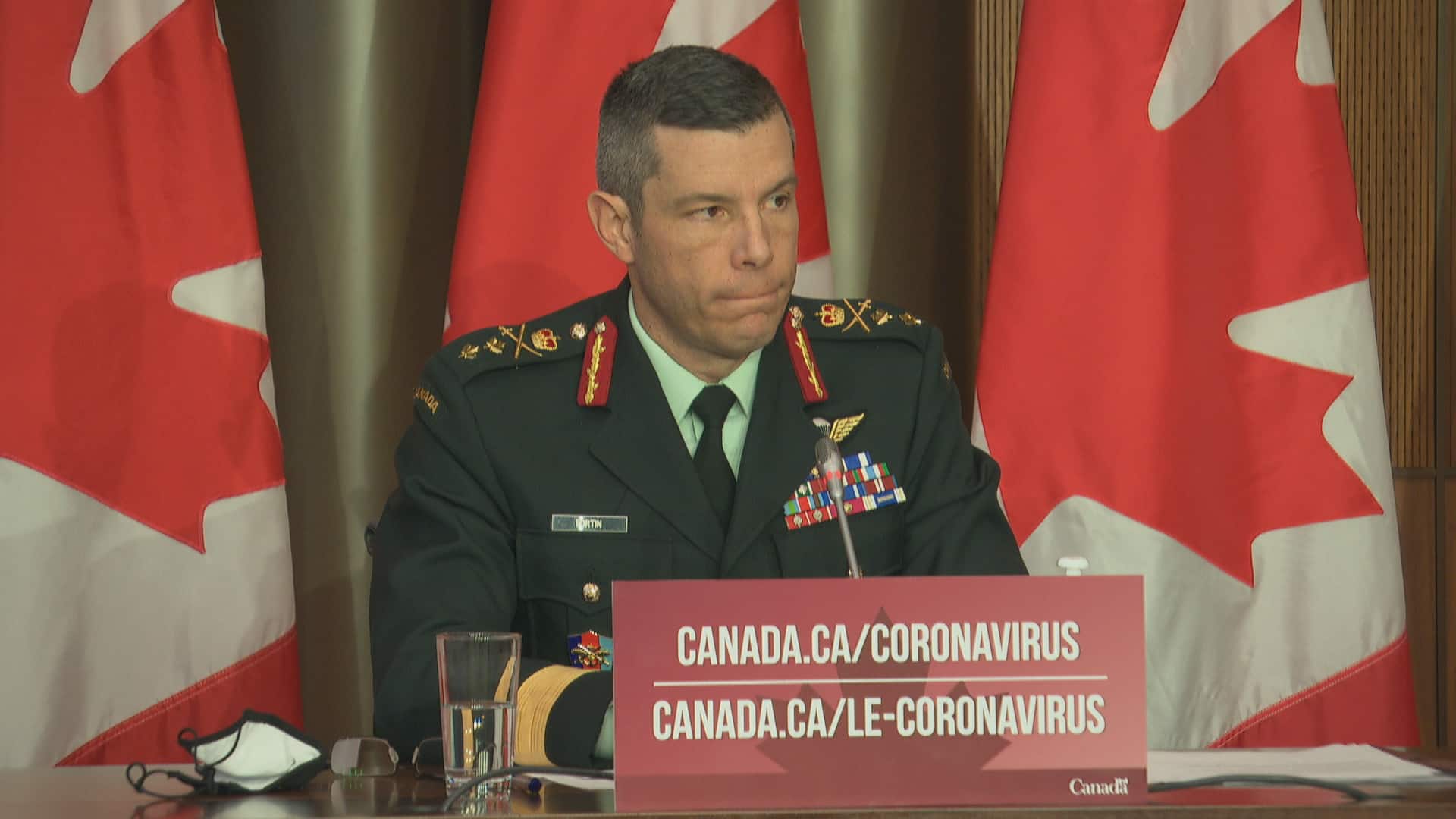 Maj.-Gen. Dany Fortin spoke to reporters during the pandemic briefing in Ottawa on Wednesday. 3:01

But with just a few thousand doses delivered to this point, Fortin conceded there could still be hiccups as hundreds of thousands of doses come online in the weeks to come.

The provinces and territories have agreed to largely follow vaccination guidelines released by the National Advisory Committee on Immunization (NACI). Long-term care and retirement home residents and staff, the elderly, front line health care workers and some Indigenous adults will receive shots in the first phase of distribution.

The vaccination campaign for the general population will begin in April.

While Canada has ordered more than enough doses to vaccinate everyone who lives here, early polling suggests a sizeable minority — 13 per cent of all people surveyed in a recent Angus Reid Institute poll  — will not take the shot at all.

The World Health Organization (WHO) estimates that at least 65 to 70 percent of a given population must be vaccinated to develop some degree of herd immunity and halt the spread of a disease.

Once that threshold is reached, the COVID-19 virus will have fewer possible human hosts, driving down transmission rates.

Dr. Anthony Fauci, the director of the National Institute of Allergy and Infectious Diseases, has said the U.S. could begin to achieve herd immunity by late spring or summer.

“I would say 50 per cent would have to get vaccinated before you start to see an impact,” Fauci said in an interview with National Public Radio (NPR) on Tuesday.

“But I would say 75 to 85 per cent would have to get vaccinated if you want to have that blanket of herd immunity.”