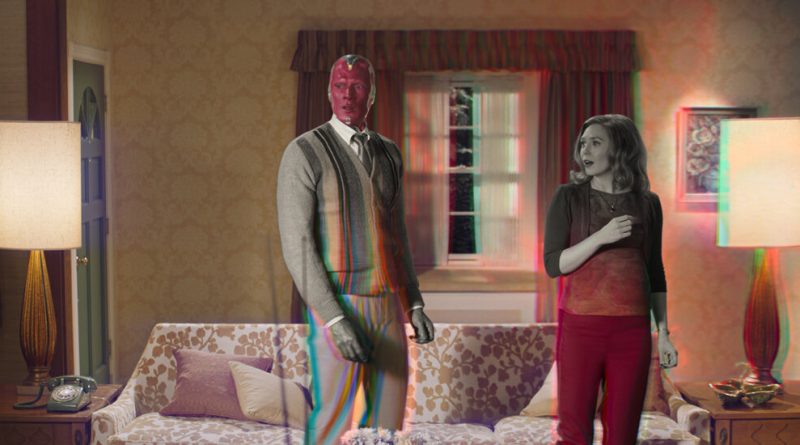 In the time they have spent playing Marvel heroes together, Elizabeth Olsen and Paul Bettany have gotten extremely comfortable with each other. Not even a little misdirected mucus during the making of their new Disney+ series, “WandaVision” — an incident they affectionately describe as “Snotgate” — flustered them for long.

It occurred when their characters — a woman enhanced with psychic powers named Wanda Maximoff (Olsen) and a synthetic android called Vision (Bettany) — shared a kiss in especially cold weather. And some disagreements remain about the specifics of how it transpired.

“Paul was not in a good mood for me to make a joke about his snot,” Olsen said in a video interview with Bettany last month. “It was my first time ever seeing him get truly defensive about anything.”

Here, Bettany leaned into his camera and replied, sotto voce: “It was her snot. Anyway.”

They agreed that their differences were quickly settled, and now they can laugh about it. “It was over as quickly as it happened,” Bettany said.

Such are the perils of playing a troubled woman and a sophisticated robot who have fallen in love with each other — characters who first met in the 2015 Marvel blockbuster “Avengers: Age of Ultron,” returned for several sequels and now get the chance to carry their own television series when “WandaVision” makes its debut on Jan. 15.

Like its main characters, “WandaVision” is, well, weird. It’s not strictly an action-packed spectacle in the manner of hit movies like “Avengers: Endgame” — it’s a hybrid of drama and comedy that pays faithful homage to vintage sitcoms like “The Dick Van Dyke Show,” “Bewitched” and “Family Ties.”

Now, through circumstances beyond anyone’s control, “WandaVision” has to carry even more weight. When the pandemic prompted Marvel to reshuffle its release calendar, “WandaVision” became the studio’s first attempt to bring the superhero soap opera of the Marvel Cinematic Universe to an original Disney+ series, in hopes that it will do for its comic-book characters what “The Mandalorian” has done for “Star Wars,” another Disney-owned fantasy franchise.

These are unexpectedly high stakes but, like the love-struck misfits they play, the stars of “WandaVision” see them as reasons to be more understanding of each other, snot and all.

As Olsen explained: “It’s daunting to take these movie-theater characters and put them on a small screen. There’s a lot of firsts that are a little scary as an actor.”

Bettany agreed. “We need to feel safe with each other,” he added, “to do the thing we’re doing.”

Both actors entered the Marvel family in unusual ways. Bettany, a star of films like “A Beautiful Mind” and “Margin Call,” was cast in the first M.C.U. movie, “Iron Man,” to play the voice of Tony Stark’s artificial intelligence system, J.A.R.V.I.S.

“I would turn up for one day’s work and solve everyone’s problems,” Bettany said. “I could go, ‘The bad guys are coming, sir!’ And then they would give me a bag of money, and I would go home. It was lovely.”

Bettany was upgraded to an onscreen role for “Age of Ultron,” which also introduced Olsen (“Martha Marcy May Marlene”) as Wanda. At that time, Olsen said: “I was getting typecast as emotionally struggling young women in small genre films. They were like, let’s put her in a bigger genre film and make her the mentally unhealthy struggling hero.”

Though the spotlight shone brighter on co-stars like Chris Evans and Robert Downey Jr., Bettany and Olsen bonded over the strangeness of their enterprise, like a behind-the-scenes debate they observed over whether Vision should have android genitalia. (Mercifully, the answer was no.)

As they went onto films like “Captain America: Civil War,” they found that they shared an appreciation for diligence and preparedness, even on a hectic Marvel set.

At one point on that film, Olsen said, “I asked Paul if he wanted to run lines with me for the next week. And he had his lines memorized for next week. I was like, this is going to be a great working relationship.”

But Vision was seemingly killed in “Avengers: Infinity War,” and the following year, “Endgame” concluded the narrative arcs of major heroes like Iron Man and Captain America.

Marvel was exploring story lines for its next wave of movies when Disney introduced its Disney+ streaming service, with the expectation that Marvel would also provide original content for it.

Kevin Feige, the Marvel Studios president, said that a Disney+ series offered the opportunity to flesh out the relationship between Wanda and Vision that had been only hinted at in the movies.

“The entirety of the love story between Wanda and Vision was basically one shot in ‘Age of Ultron’ where he swoops in to rescue her, they make eye contact and fly away,” Feige said. “Then a bit more in ‘Civil War,’ a bit more in ‘Infinity War,’ but it all goes bad very quickly in that movie.”

In several decades of comics, Vision and Wanda shared a romance that was much more intricate: They dated, married, had two sons, broke up and reconciled. (Also — and here is where it gets messy — Wanda discovered that her sons were actually the missing pieces of a demonic villain, who reabsorbed them; then she lost and regained the memory of her vanished children; and then she vengefully unleashed her powers to rewrite reality itself.)

With “WandaVision,” Feige said that he had wanted to honor the complexity of the title characters and Wanda’s reality-warping abilities but also to leaven the story with tributes to sitcom history.

The series finds Wanda and Vision — now somehow alive — residing in suburban bliss, not entirely sure of why they are cycling through various eras of television history and encountering veteran Marvel performers like Kat Dennings (as her “Thor” character, Darcy Lewis) and Randall Park (reprising his “Ant-Man and the Wasp” role of Jimmy Woo) as well as new additions to the roster, like Teyonah Parris (as Monica Rambeau) and Kathryn Hahn (playing a perplexingly nosy neighbor named Agnes).

As with many of the Marvel movies, there is also a central mystery running through “WandaVision,” asking viewers to ponder the ever-changing reality that envelops its romantic leads.

Jac Schaeffer, the head writer of the series, said that the show’s comic exterior was intended to lure its audience into its further layers of intrigue.

“You enter a sitcom episode with the understanding it’s going to make you feel good and it’s all going to be OK at the end,” said Schaeffer, who also worked on “Captain Marvel” and “Black Widow.”

What “WandaVision” adds to this formula, she said, is an element of “creepiness — the idea of shattering that safety in a calculated way.”

Matt Shakman, who directed all nine episodes of “WandaVision,” said that the series ultimately tells a story of “grief and trauma and how we hold onto our hope.”

“Wanda is probably the person who has suffered the most of anyone in the M.C.U.,” he added. “And so the show is always grounded in that. Even though what you see are faithfully recreated television shows, there’s a lot more going on than meets the eye.”

Shakman has previously directed shows like “Game of Thrones,” “Succession” and “It’s Always Sunny in Philadelphia” and was himself a former child actor on TV sitcoms like “Diff’rent Strokes” and “Just the Ten of Us.” Directing “WandaVision,” he said, was “a gloriously schizophrenic job” that some days required orchestrating action sequences on green-screen sets, and some days involved shooting on the same sitcom stages where he once worked.

For these TV tribute sequences, Shakman and his team worked carefully to reproduce the wardrobe and production design of shows like “I Dream of Jeannie” and “The Partridge Family,” using vintage lighting and camera lenses and filming in front of live studio audiences.

Although the “WandaVision” actors were given two weeks of sitcom boot camp before filming started, they did not require much training to get into the spirit of things.

Olsen is, of course, the younger sister of the former “Full House” stars Mary-Kate and Ashley Olsen; she appeared in some of their later projects and grew up a fan of shows like “Laverne & Shirley” and movies like “A Very Brady Sequel.”

Bettany said that classic American shows were a regular part of his TV diet when he was growing up in England. He speculated that some of the religious exploration his family undertook in his childhood may have happened “because my mom was watching ‘Little House on the Prairie’ — we were in for a penny, in for a pound.”

Had events unfolded according to Marvel’s earlier plans, the debut of “WandaVision” would have followed the theatrical releases of movies like “Black Widow,” “Eternals” and “Shang-Chi and the Legend of the Ten Rings,” as well as the premiere of “The Falcon and the Winter Soldier,” an action-oriented Disney+ series in a more familiar, “Avengers”-like mode.

The pandemic required Marvel to reorganize this rollout, but Feige said that the studio’s carefully planned master narrative, stretched across its films and TV shows, had not been significantly affected.

“If the run we had in 2018 and 2019 had gotten disrupted this way, in the buildup to ‘Endgame,’ it would have been a bigger headache,” he said. “With these projects, it worked well,” he went on, adding that the debut dates for the TV shows were shifted only “by a matter of weeks.”

The creation of “WandaVision” was also affected by the pandemic; its actors left an environment where they could freely mingle with co-workers and returned to one, several months later, where “you finish your scene and you get whisked away into these hermetically sealed bubbles,” Bettany said.

“I had a hard time with that,” Olsen said, her voice hardening in exaggerated anger. “I was like: ‘But I’m talking to the crew! This is for moral support!’”

In that sense, the actors said, perhaps it was fitting that “WandaVision” should reach audiences at this moment, when both its narrative message and its making-of process reflect a human desire to keep going, no matter how unrecognizable the world becomes.

“We’re all experiencing this extreme version of life right now,” Olsen said. But for a time, while she and her colleagues finished their work on the series, “We created this microcosm of humanity where we could communicate and problem-solve together,” she added. “There was something great about getting to come to work and experience that.”

What Marvel has done consistently, for its characters, its cast members and its audience, is “create a home for people who wouldn’t necessarily find each other,” Bettany said.

In the particular case of “WandaVision,” he added, “It’s about a group of people finding each other — people who are really getting their freak on — in a situation where it’s all right to be really different.” 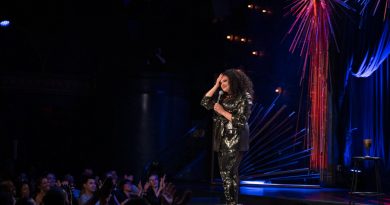 A Canadian Town Is a Festive Anywhere, U.S.A., Onscreen