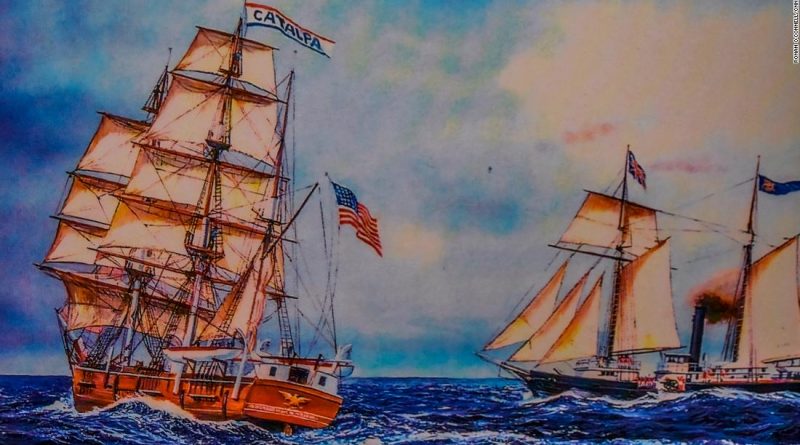 Perth, Australia (CNN) — It all began with a letter sent from inside an Australian “tomb,” a document so convincing that it prompted a US gang to sail some 20,000 kilometers (12,427 miles) to execute what could arguably be considered one of the most outrageous prison escapes in Australian history.

The year was 1876. Using a series of codes and disguises, the bold group snuck into Western Australia to free six Irish political prisoners.

Now, 145 years later, a new generation of Australians is learning about this prison break thanks to WA Museum Boola Bardip.

The museum, which reopened in November 2020, was closed for four years for redevelopment. Featuring eight new galleries, it’s located on the same site it has occupied since 1891, when it opened as a geological museum in the Old Perth Gaol.

Among the many displays on offer is a modern look at the Catalpa rescue — named for the ship they journeyed to freedom on.

Featuring images of the prison they escaped from and the ship, the WA Museum Boola Bardip’s new Catalpa display is part of the Reflections Gallery — a permanent exhibit that examines the way “unique experiences and perspectives have shaped our state’s identity and sense of place.”

The display explains how the escape created headlines around the world and inspired multiple folk songs, complimenting several tourist sites already available for visitors who want to follow the trail of the prisoners’ wild journey.

Jailed for crimes of rebellion

In a state where 10% of the population has Irish ancestry, the Catalpa escape remains a stirring tale of cunning, courage and revolt.

In the 1860s, many Fenians — an Irish nationalist movement with strong membership in the US that aimed to end the British occupation of Ireland — were arrested by the British and jailed for crimes of rebellion, explains Irish-Australian writer Peter Murphy, author of the book “Fenian Fear.”

The 62 Fenians sent to Western Australia were locked away in the infamous, British-run Fremantle Prison, located in the port of Fremantle in what’s now the Perth metropolitan area. Built in the 1850s, this hulking stone jail — Western Australia’s only World Heritage listed building — is now one of Perth’s top tourist attractions, with its guided tours covering the story of the Catalpa.

Murphy explains that one of those 62 prisoners managed to escape Fremantle Prison in 1869: John Boyle O’Reilly, a famous Irish activist who later became key to the Catalpa mission.

The new WA Museum Boola Bardip features eight new galleries, one of which includes an exhibit dedicated to the Catalpa escape.

Prior to O’Reilly, no other prisoner had ever managed to escape from Fremantle Prison. He wouldn’t be the last.

The Catalpa escape took root when an Irishman living in New York, John Devoy, heard a “voice from the tomb” in 1874. This was the eerie wording that Fenian James Wilson used to describe his imprisonment in a letter to Devoy, begging for help to escape Fremantle Prison.

Aided by an Irish priest, the Fenians were able to smuggle such letters out of the jail to distant and free members of their brotherhood. However, Devoy was the only one who answered their desperate call.

He bought the Catalpa ship in the US state of Massachusetts and then, to create a cover story for his long trip to Western Australia, converted it into a whaling vessel, before setting sail for Perth with a small crew.

The captain of the Catalpa was an American, George Smith Anthony, who was said to be sympathetic to the Fenian cause.

Escaping from prison? That was the easy part

Realizing they couldn’t just cruise into Australia and snatch their imprisoned brothers, the rescue crew concocted a clever plot. Devoy sought advice from O’Reilly, hoping to exploit the experience of his own escape from Perth.

“Being a journalist, it was O’Reilly’s keen observation of the Western Australia coastline, his knowledge of the (state’s) penal system, and layout of Fremantle town (including its prison), that would make him the obvious choice to be involved in the rescue,” says author Murphy.

Devoy sent two Fenians to Perth ahead of the Catalpa. These men — Thomas Desmond and John Breslin — were tasked with gathering on-the-ground intelligence. They posed as wealthy businessmen, made local contacts, and studied Fremantle Prison for gaps in its security.

Breslin made repeated visits to the prison, then known as the Convict Establishment, under the guise of seeking convict labor. His last visit came after he received a coded telegram from the Catalpa’s captain, which revealed the date the ship would arrive in Perth.

While inside the jail, Breslin managed to get word of the escape plan to the imprisoned Fenians. The key message was that, on April 17, each man had to get themselves into a work gang — convict labor groups that did jobs outside the prison walls.

When that day arrived, everything was in place. The telegraph line between Fremantle and Perth had been cut so prison staff would be slowed in alerting authorities. Breslin waited at a meeting spot, where he had weapons, horses and two wagons.

Off the Rockingham coast, the Catalpa and a smaller rescue vessel stood by.

View of the main cell block and parade ground at Fremantle Prison.

The six Fenian prisoners managed to break free from their gangs and rush to the rendezvous location. Soon, Breslin saw them bolting towards him. They hopped into the wagons and galloped down the coast to Rockingham beach. There, on the sand, the Catalpa’s captain loaded them into a small boat and headed for the whaling ship.

The escape went remarkably smoothly. The Fenians could have been forgiven for celebrating. But a storm was stirring, both figuratively and literally. Just as authorities were learning of the escape, the Indian Ocean became rough and the prisoners got lost before they could reach the Catalpa.

They spent a night adrift at sea, and were lucky to avoid the detection of police boats scouring Perth’s coastline. The following day, the escapees finally found the Catalpa and set sail for freedom.

Soon, however, they were spotted in international waters by a British ship loaded with colonial guards and armed with a cannon. The guards fired and the Fenians returned volley as explosions illuminated the ocean waters near Fremantle.

Perhaps recognizing his crew was outgunned, the Catalpa’s American captain hatched a clever plan. He raised a United States flag on the ships’s mast and, according to an exhibit in Canberra’s National Museum of Australia, bellowed these words: “That’s the American flag. I am on the high seas, my flag protects me. If you fire on this ship, you fire on the American flag.”

The ploy evidently worked. The colonial guards had been advised to avoid creating a scandal in international waters and retreated. Cheering in jubilation, the Fenians and their saviors cruised into the distance, bound for the US. They arrived in New York to a raucous welcome from members of the city’s huge Irish community.

Author Murphy says the significance of this escape extended beyond its daring and intrigue. It was a rousing example of Irish rebellion against the British, who had subjugated the Irish for centuries.

“The Catalpa was one of the few success stories where Irish nationalists could claim to have been victorious, considering previous attempts to undermine the Crown had failed miserably due to informers,” says Murphy.

The Catalpa Memorial was erected in 2006.

In the years thereafter, this Fenian triumph became an inspiration to many Irishmen who remained in Western Australia.

Their voices would boom through local pubs as they sang the proud story of the Catalpa: “A noble whale ship and commander, called the Catalpa they say, came out to Western Australia, and took six poor Fenians away. So come all you screw warders and gaolers, remember Perth Regatta Day, take care of the rest of your Fenians, or the Yankees will steal them away.”

Just be careful singing it today. According to the display at the new WA Museum Boola Bardip, “the Ballad of the Catalpa so annoyed police that it was officially banned in Western Australia and remains banned today.”

In addition to the new museum and historic Fremantle Prison, travelers can visit the Catalpa Memorial, located at the site of the shore they escaped from in Perth.

The statue, on Perth’s Rockingham Beach, was erected in 2006. It features a frozen flock of wild geese, their wings outstretched as they rise towards the freedom of the sky.

“Wild geese” was the fond name given to Irish soldiers who served in foreign armies in the 17th and 18th centuries. It later became a common term for the millions of Irish migrants scattered across the globe.

Engraved into the base of that stone statue are images of the six Fenians rescued by the Catalpa ship — James Wilson, Martin Hogan, Robert Cranston, Thomas Darragh, Michael Harrington and Thomas Hassett. 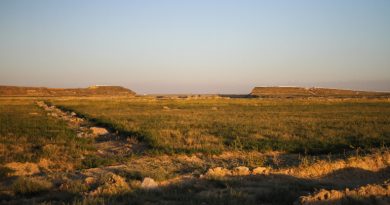 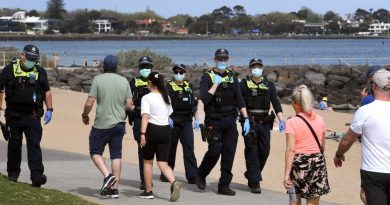