Kamui Kobayashi, Mike Conway and Jose Maria Lopez sealed the 2019/20 World Endurance Championship title after a dominant victory in front of their Toyota team-mates in Bahrain.

The drivers of the #7 Toyota TS050 HYBRID came home at the end of the eight-hour race more than a minute clear of the sister car driven by Sebastien Buemi, Kazuki Nakajima and Brendon Hartley.

The #8 Toyota were never in the hunt with the 0.54s performance penalty they were carrying under the LMP1 system of success handicaps.

The gap between the two TS050s would have been more than a lap but for a safety-car period just after the halfway mark.

The neutralisation of the race all but wiped out a lead of just over a minute for the #7 Toyota.

Buemi briefly looked as though he might be able to mount a challenge after taking back the controls of the #8 early in the fifth hour, but dropped away from Conway during the second stint on a set of new Michelins.

Kobayashi and Nakajima took over their respective mounts for the run to the flag in the final race for the TS050 at the end of the LMP1 era, the margin between them standing at 1m04s when the chequered flag fell. 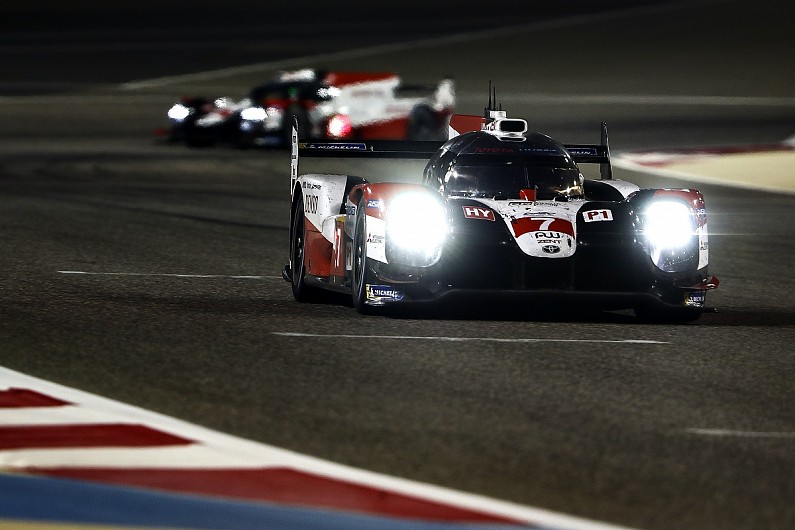 Conway said: “I feel good. It’s been a long season with all that’s going on in the world.

“To clinch this title is a huge credit to my team-mates – they made me look good.

The Jota Sport squad finished one-two in LMP2, the ORECA-Gibson 07 entered under the Jackie Chan DC Racing banner coming out on top in a thrilling battle with the sister car run under the team’s own flag.

Gabriel Aubry barged past Antonio Felix da Costa with 10 minutes of the race to run to seal victory together with Will Stevens and Ho-Pin Tung on what looks certain to be Chan/DC’s final WEC race.

Da Costa, who shared the Jota entry with Anthony Davidson and Roberto Gonzalez, had sneaked ahead of the sister car at the final round of pits but couldn’t pull away from Aubry.

When the reigning Formula E champion was baulked by a GTE Am Ferrari, Aubry made his move at Turn 10 and then sealed the position into Turn 11.

United Autosports, which wrapped up the P2 title with Filipe Albuquerque and Phil Hanson at the Le Mans 24 Hours in September, ended up nearly half a minute behind in fourth after being in hunt for the first five hours.

An undisclosed fuel glitch which meant Paul di Resta was slow into the pits at the same stop that he took a five-second penalty garnered by Albuquerque for causing a collision dropped them out of contention. 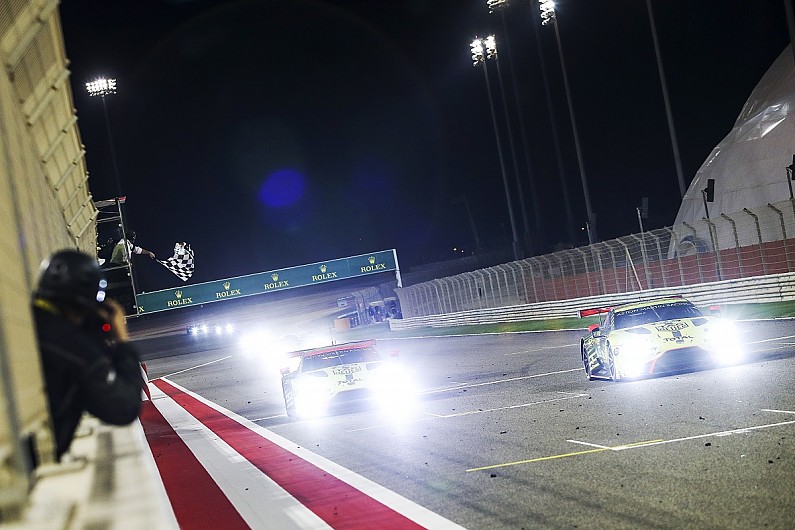 Porsche finished one-two in GTE Pro as Aston Martin duo Nicki Thiim and Marco Sorensen claimed the drivers’ title to go with the manufacturers’ crown that the British manufacturer sealed at Le Mans.

Kevin Estre and Michael Christensen took victory in the factory Porsche 911 RSR by 2.8s from the sister car of Gianmaria Bruni and Richard Lietz after leading for much of the duration.

A distant third place went to the AF Corse Ferrari 488 GTE Evo of David Rigon and Miguel Molina, who ended up more than a minute behind the Porsches.

Thiim and Sorensen were in the hunt at the beginning of the race until losing time in a full-course yellow virtual safety car and then dropped out of contention with a brake issue that afflicted all four Vantage GTEs in the race.

They eventually ended up two laps in arrears in fifth place, which was more than enough to give them the crown ahead of Maxime Martin, who finished fourth in the sister Aston with Richard Westbrook.

James Calado lost an outside chance of the title when his team-mate in their AF Corse-run Ferrari 488 GTE Evo, Daniel Serra, tagged a GTE Am Porsche and suffered a broken wheel.

The GTE Am title went to Emmanuel Collard, Nicklas Nielsen and Francois Perrodo, who overhauled an eight-point deficit to the drivers of the TF Sport Aston Martin.

Second place behind the Project 1 Porsche of Jorg Bergmeister, Larry Ten Voorde and Edigido Perfetti was allowed them to leapfrog Jonny Adam, Charlie Eastwood and Salih Yoluc in the final points.

The Aston drivers finished down in eighth after losing time to a change of front brakes at the start of the final hour. 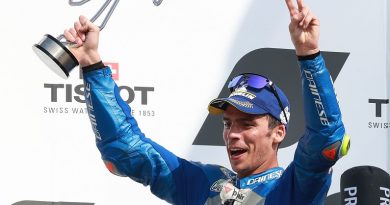 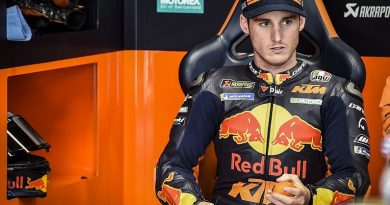 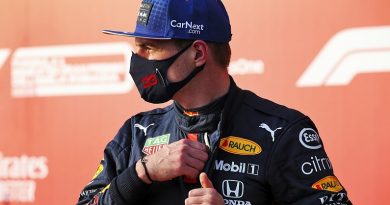