“We’re staring down the barrel of another lockdown,” Ontario Premier Doug Ford said on Friday. “And I will not hesitate for a second if we have to go further.”

It was a blunt statement about a blunt instrument: some combination of widespread restrictions, closures and a potential declaration of emergency.

It’s a situation few Ontarians want to see again, Ford among them — but some warn it may now be unavoidable as the province’s COVID-19 cases keep surging to new heights, with more people filling hospital beds week after week.

“We’re not looking down the barrel at a lockdown,” said Toronto-based physician epidemiologist Dr. Nitin Mohan. “A lockdown is inevitable.”

On Thursday, the latest modelling from Ontario’s science advisory table showed a staggering 6,500 daily new cases are possible by mid-December if no further action is taken.

At least 110 people are already in intensive care units, according to the most recent data from a COVID-19 report sent out to critical care stakeholders, and Ford said modelling shows those units could be “overwhelmed” within six weeks.

There have also been dozens of deaths over the last week alone, including more than 70 in outbreak-riddled long-term care facilities.

The numbers and the trajectory don’t bode well. The country as a whole has hit a “tipping point,” said Dr. Ann Collins, president of the Canadian Medical Association, noting physicians in Ontario keep pushing the province to bring in tougher restrictions.

What it would take to trigger a lockdown in Ontario — and what that would look like — isn’t clear.

‘What would the lockdown consist of?’

Chief medical officer of health Dr. David Williams mused about the possibilities on Friday: “The question is, when would one do a lockdown? What would the lockdown consist of? Does it consist of closing certain aspects — all aspects? Does it include closing schools, yes or no? What do you do with long-term care visitations?”

Williams expects that advice will come from the public health measures advisory table, then up to him and Ford. 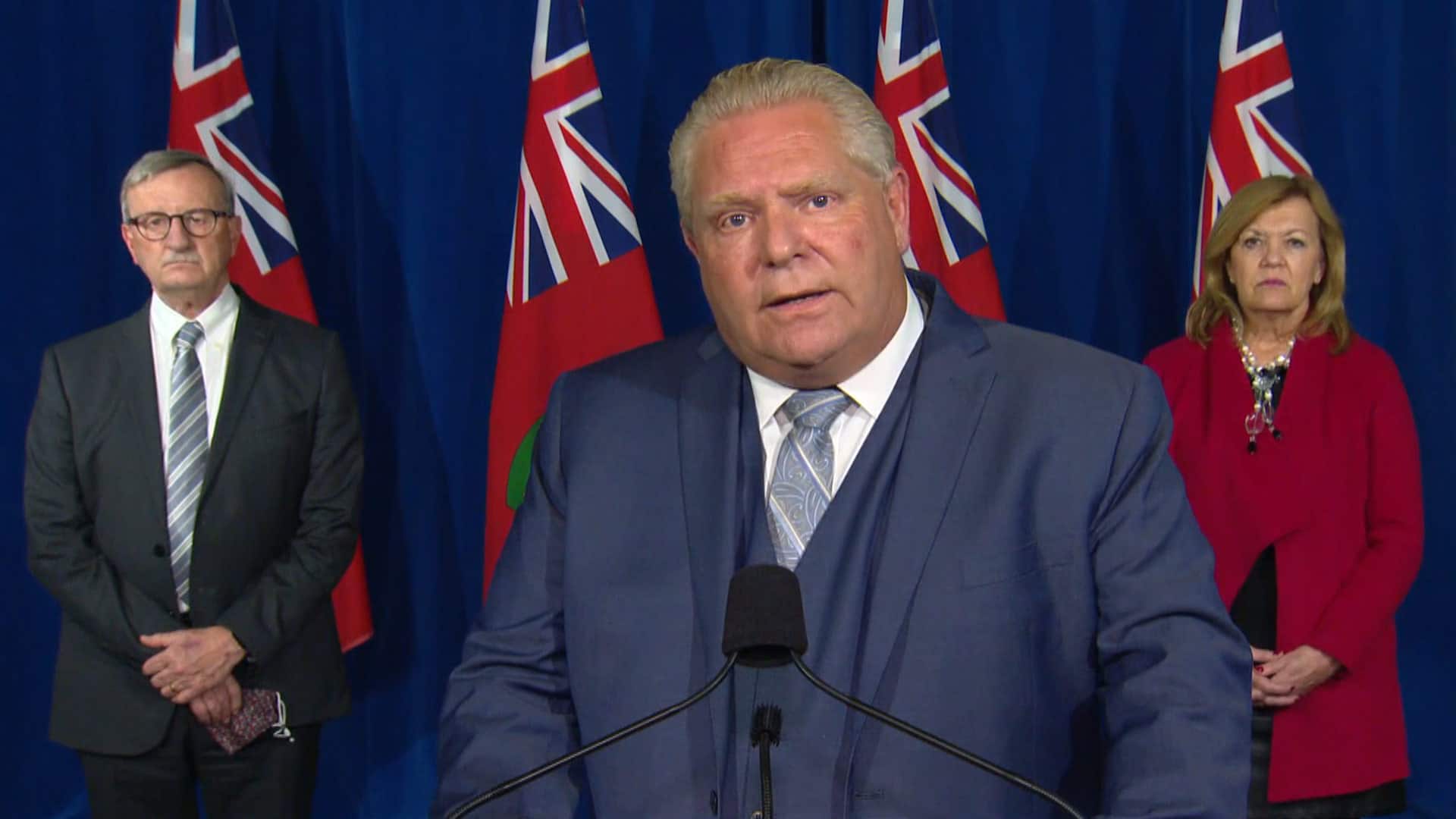 When asked why he ‘waited so long’ to lower thresholds in the province’s framework for restrictions despite warnings from medical experts about rising COVID-19 cases, Premier Doug Ford told reporters the modelling has changed from what it was nine days ago, and said he’s been decisive throughout the pandemic. 1:05

“The current situation we’re in right now has been created by the government.… We’ve known we had to build up our testing capacity. We’ve known we needed aggressive contact tracing,” said the Western University assistant professor.

Toronto Public Health in particular has struggled with the high caseload and in October even paused efforts to reach contacts of many infected residents beyond the highest-risk cases.

Ford defended his government’s approach at his Friday news conference, saying officials were “decisive” on both the testing and tracing fronts.

Citing the previous day’s dire modelling projections — not the growing chorus of concerned outside experts — he also announced a lower threshold for restrictions, bringing multiple regions, including Toronto, into the highest possible level.

One step further? A full lockdown, whatever that looks like.

Isha Berry, a PhD candidate in epidemiology at the University of Toronto who is leading the COVID-19 Canada Open Data Working Group, said it’s not too late to pull the trigger and curb case growth.

But widespread virus transmission within communities makes that job harder by the day.

Those sparks — early warning signs of trouble to come — came in the form of COVID-19 cases emerging among younger Ontarians in the late summer, with outbreaks tied to bars, restaurants and other gathering spots.

But the virus kept moving. First through older populations, then into hospitals, into long-term care, into newly reopened schools.

Members of the medical community, who tend to agree lockdowns are a last resort, don’t want to see the school system or health-care system put on pause again.

And while there’s a risk hospitals could be overrun by COVID-19 patients, another round of cancelled surgeries and procedures to make room for them would also have an impact on Ontarians’ health, said Dr. Bram Rochwerg, site lead at the Juravinski Hospital intensive care unit in Hamilton. 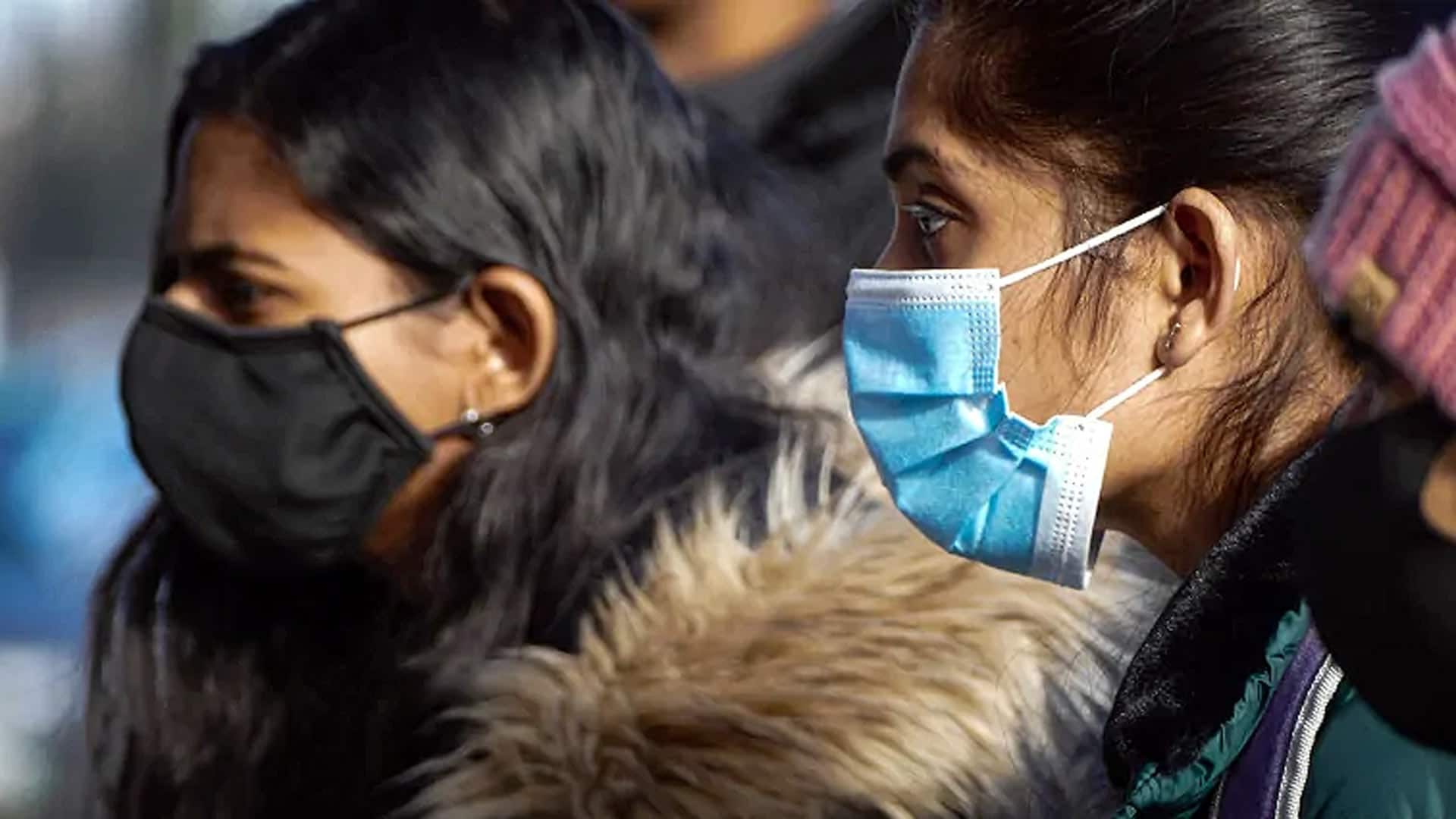 Ontario is making changes to its colour-coded COVID-19 system and putting several regions into the red “control” zone, which contains more severe restrictions. The change comes after Premier Doug Ford’s government came under fire in recent days for its system being too lenient as case counts in Ontario surged to record levels. 4:15

“The appetite for sweeping lockdowns and sweeping changes right now in our public is not there,” he said. “But the impact that’s going to have on our capacity is going to be concerning.”

According to Dr. Camille Lemieux, chief of family and community medicine at the University Health Network in Toronto, Ontario’s not at the end of the line yet, though it all depends on hospital capacity as the weeks progress.

And, she added, the province should be careful of avoiding a sledgehammer approach, bringing Ontario back to the complete closures of the spring.

“There’s harm on either side,” she said.

Harm that, one way or another, may be unavoidable. 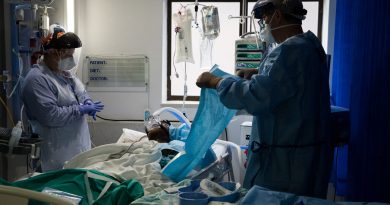 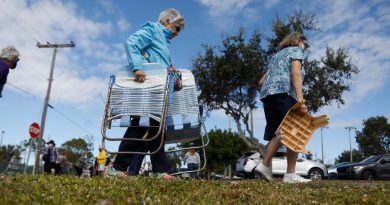 ‘It Became Sort of Lawless’: Florida Vaccine Rollout Turns Into a Free-for-All 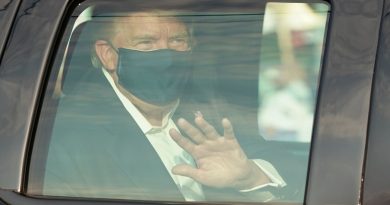