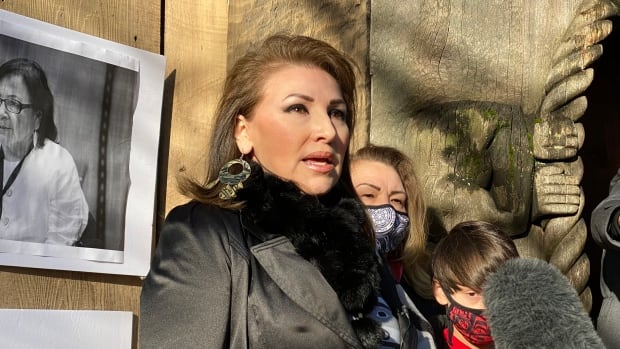 A Haida filmmaker is pushing for new legislation in Canada to penalize people who pretend to be Indigenous in order to access grants, awards and jobs intended for Indigenous people.

Tamara Bell said she wants those who misrepresent their identity to face fines and even prison time.

Bell’s move comes on the heels of Indigenous elders exposing filmmaker Michelle Latimer’s unfounded claims that she was Indigenous. Latimer, who recently directed the CBC television series Trickster and the documentary Inconvenient Indian, is in fact primarily French Canadian, Irish and Scottish.

“It is reprehensible in all measures, so I think as Indigenous people, we have to draw a line in the sand,” Bell said Monday at a news conference in Vancouver.

Right now, most Canadian institutions — even those that administer funds allocated specifically for Indigenous people — use self-identification as the gold standard for identifying who is Indigenous. That means anyone can simply say “I am Indigenous” to authenticate their Indigeneity.

Some, like Latimer and author Joseph Boyden, have used the ease of self-identity to access grant money and opportunities that could have gone to Indigenous people.

“People can’t just come in and squeeze out dollars. We’ve gone a long time being starved and we have to stand up,” said Métis Elder Corie Thunderchild, who is supporting Bell’s bid for an Indigenous authentication law in Canada.

Bell is proposing an Indigenous Identity Act, which she hopes will deter what she and others call “pretendians” from assuming Indigenous identity.

She pointed to legislation in the United States known as the Indian Arts and Crafts Act of 1990, a truth-in-advertising law that makes it illegal “to offer or display for sale, or sell any art or craft product in a manner that falsely suggests it is Indian produced.” A first-time violation of the act could land a person a five-year prison term or a $250,000 fine, or both.

“Unfortunately, Canada often turns a blind eye to the wholesale theft and exploitation of Indigenous identity, which has become a widespread problem all too frequently,” Bell said.

Bell is calling on the Indigenous Screen Office, the Canada Media Fund, Telefilm Canada, CBC and the National Film Board to support the call for Indigenous authentication legislation.

In a statement, the executive director of the Indigenous Screen Office, Jesse Wente, said the ISO “will undertake a community engagement process in 2021 regarding Indigenous identity that will inform future policy directions.”

He said the process will start “over the next two months beginning with elders and Indigenous organizations with knowledge and expertise in this area, and will extend into the summer with broader consultations.”

The statement also explained “this is a nuanced issue that requires time to listen to the many different community perspectives … we accept our responsibility in taking a leadership role for the sector on this important issue through this process.”

Bell said she understands the sensitivity of the issue of Indigenous identity, with colonial apparatuses like residential school and the Sixties Scoop removing children from their communities and families.

But she said there are still ways to verify Indigenous identities — one can get a letter from an elder, their community, a relative or their band to verify which community they are from.

“There is no way to ensure every single individual is authentically Indigenous, but [this proposed act] could prevent misrepresentation, because there’s a risk that you will be found out and there will be consequences.”

Bell is supported by several Indigenous elders, including Elizabeth Sinclair from the Peguis First Nation, Gail Sparrow from the Musqueam Nation, and Corie Thunderchild from the Métis people.

She said she is also in conversation with two Canadian senators.

The CBC asked for comment from Indigenous Services Canada about its consideration of such an act. It said it is working on a response.

The Weeknd and Roddy Ricch lead AMA nominations with 8 each