Former finance minister Bill Morneau says he was thinking of leaving federal politics and running for a top diplomatic post well before the WE Charity affair prompted his sudden departure from cabinet.

On Thursday, Morneau told CBC’s Rosemary Barton that, for some time, he’s had his eye on the secretary-general position with the Organisation for Economic Co-operation and Development (OECD), an intergovernmental agency that promotes democracy and the market economy.

And Morneau insisted he would have pitched himself for that job even if the WE Charity affair hadn’t erupted on his watch.

“Let me tell you, I was really thinking about the secretary-general of the OECD job before and I recognized you couldn’t be a sitting finance minister and run for a global position at the same time. That was my conclusion,” Morneau said.

“It’s always a little bit messy when you leave politics. That’s kind of the nature of the sport. There are no rules and you’ve got to find your way out, but I’m happy to have done it. That leads me to be able to think about how I can bring that experience to another role.”

The full interview with Morneau will air on Barton’s new show, Rosemary Barton Live, which debuts Sunday at 10 a.m. ET on CBC News Network and 11 a.m. ET (12 p.m. AT) on CBC TV.

Despite reports of friction between Prime Minister Justin Trudeau and Morneau over the summer months, Trudeau has endorsed his former finance minister for the diplomatic post, saying Canada would “vigorously support” Morneau’s candidacy.

OECD member countries — largely western nations — will decide in private who takes the job. The appointment will be announced in March 2021.

Some observers have said Morneau’s involvement in the WE scandal may make his bid for the OECD post a longshot. Cecilia Malmström, the European Union’s former trade commissioner and Sweden’s nominee for job, is also in the running.

Morneau’s five-year tenure as finance minister abruptly ended in August. He resigned while the Commons finance committee was in the midst of a deep dive into the Liberal government’s decision to hand a multi-million-dollar summer student grants contract to the WE Charity, a Toronto-based organization that has since shuttered its Canadian operations amid controversy over the contract and its corporate governance and real estate holdings.

Morneau came under fire after it was revealed he did not recuse himself from cabinet talks about the contract despite his family’s close personal ties to the WE organization. At the time, Morneau’s daughter, Grace, worked at WE in the travel department. His other daughter, Clare, has spoken at WE Day events.

Morneau has apologized and the federal ethics commissioner is now investigating whether his decision to vote on the deal at cabinet breached the Conflict of Interest Act. Trudeau is also under investigation. Since 2016, Trudeau’s mother and brother have been paid some $300,000 for WE speaking engagements.

Alan Freeman, a former senior bureaucrat at Finance Canada and a professor at the University of Ottawa, wrote in a recent iPolitics op-ed that Morneau’s WE connection will be seen as unsavoury by some of the member states.

“Morneau’s departure from the finance minister’s job under the cloud of conflict of interest won’t look good at an organization responsible for the OECD Anti-Bribery Convention,” he wrote.

Morneau said he is running for the job to help coordinate the global economic response to COVID-19, to bolster the group’s work on climate change issues and to draft policies on how best to tax and regulate digital web giants like Facebook and Google.

“For me, it’s a really exciting opportunity to have a big impact on public service, but in a different way,” Morneau said. “I have the the capacity both to work with the member countries from, you know, the finance minister experience and manage the institutions, a big institution.”

Morneau said he’s met with OECD representatives of the member countries in Paris and he’s had a “favourable” reception to his candidacy.

As first reported by CBC, Ethics Commissioner Mario Dion cleared Morneau this week of any wrongdoing after a separate investigation into the free travel he and his family received from the charity.

The commissioner, after reviewing the evidence, accepted Morneau’s claim that he always had intended to reimburse the charity for the trips to Ecuador and Kenya to see WE projects in those developing countries.

In his final days as finance minister, there were a number of leaks from government sources to news agencies that described tensions between Morneau and Prime Minister Justin Trudeau.

The leaks said there were repeated disagreements between Morneau and the Prime Minister’s Office over the size of COVID-19 emergency relief measures and other spending matters — with government insiders suggesting Morneau was viewed as too tight-fisted.

An Aug. 10 piece in the Globe and Mail quoted unnamed senior government officials saying Morneau’s job was in jeopardy after “clashes” with the PM.

The piece, citing “insiders,” said Trudeau was no longer sure whether Morneau was the right person to navigate the country into a post-pandemic economic recovery.

An Aug. 15 piece from Bloomberg — again quoting unnamed sources — said there was a “rift” between Trudeau and his finance minister and those strains prompted Trudeau to turn instead to former Bank of Canada governor Mark Carney for economic advice.

The piece suggested Trudeau felt Morneau was too “orthodox” in his approach to fiscal spending.

Reuters followed up with a similar piece describing tension between the two men on pandemic policy the next day.

Asked about the leaks, Morneau said that tactic is widely used in politics and it wasn’t entirely unexpected.

Morneau acknowledged that he was trying to decide if he really was the best person to head the ministry when some in the Liberal government were pushing for a more robust fiscal response to COVID-19.

“It’s politics. There’s always going to be that. In a stressful time there are always going to be people with points of view trying to make sure we get to the right answer. I don’t see it as particularly unusual. I mean, of course, it was on the front page of the paper because it’s exciting inside news,” Morneau said.

“But the backdrop to that was we were struggling to figure out how to get to the next step. And I was struggling with, you know, how do we do that and am I the right person for that next step?”

How long can interest rates stay low once a vaccine arrives? 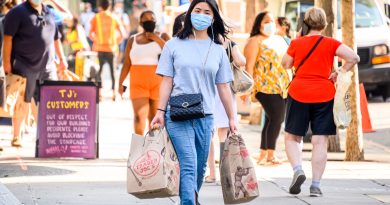 Goldman forecasts a much higher, 35% jump in Q3 GDP growth based on strong consumer

Tim Hortons to stop using two cups for hot drinks, use sleeves instead