What a difference a day makes in the outlook for the Canadian economy.

Earlier this week, some economists were predicting that the Bank of Canada’s Tiff Macklem would cut interest rates again when presenting Wednesday’s Monetary Policy Report.

But while Canada’s chief central banker warned that a resurgence in the effects of the pandemic was sending the economy further down, prospects for a vaccine-led recovery meant Canada would see a sharp return to growth later this year and next.

And while borrowers did not benefit from the “micro-cut” some had predicted — what Macklem carefully described as reducing already low rates “to a lower but still positive number” — perhaps more important for ordinary Canadians was his assurance that the bank-set interest rate would not rise.

And that reassurance came despite the central bank’s outlook of a startling transition from a shrinking economy in the first three months of the year to extraordinarily strong growth of four per cent in 2021 and five per cent next year.

In a previous meeting with reporters at the end of last year, Macklem based his forecast on the assumption that a vaccine would not be widely available until 2022 and that the economy would be scarred by the impact of the virus on jobs and businesses. But this time, there was no talk of scarring.

“Certainly the earlier-than-expected arrival of the vaccine is a very positive development,” the Bank of Canada governor said. “But we’re starting off in a deeper hole.”

Some economists have suggested that a strong rebound of the type Macklem and the bank’s Governing Council foresee would lead to a new burst of inflation that would require the bank to raise interest rates. There have been worries, including from the real estate industry, that a hike in the rock-bottom rates that have allowed Canadians to afford large mortgages would lead to a sudden slowdown.

But Macklem offered several reasons why that was unlikely to happen, for a while at least, and probably not until 2023.

For one thing, any decision to reduce stimulus would begin with a slow winding down of the Bank of Canada’s quantitative easing (QE) program. Currently the bank is still going to the market and buying at least $4 billion worth of government bonds every week, effectively releasing that cash into the economy. Macklem expects that to continue.

Another reason why the bank feels it won’t have to raise rates — the same logic for why it can continue QE — is the deep hole Macklem mentioned.

Despite the hundreds of billions of dollars in stimulus money from the Canadian government — plus the $900 billion US COVID-19 relief package already approved south of the border and the $1.9 trillion pandemic plan unveiled by newly installed U.S. President Joe Biden — the battered North American economy has lots of climbing to do.

Still lots of slack in the economy

Economics tells us that inflation does not kick in until the supply of goods, services and labour is used up such that people competing for those things start to bid up the price. But with so many unemployed, buildings empty, lots of raw material and plenty of money available to borrow and invest, the Canadian economy is not likely to reach those capacity limits until 2023, Macklem said.

Inflation numbers out Wednesday showed prices rising at the slowest rate since the financial crisis of 2009, plunging in December to an annual rate of 0.7 per cent — well outside the central bank’s target range of between one and three per cent.

The Bank of Canada expects that number to bounce back this year to an ostensibly comfortable two per cent, but as Macklem described, that will be deceptive.

“This is expected to be temporary,” he said. “The anticipated increase in inflation reflects the effects of sharp declines in gasoline prices at the onset of the pandemic, and as those base year effects fade, inflation will fall again, pulled down by the significant excess of supply in the economy.”

As well as being an unequal recession, this has been an unusual one in that those who kept their jobs have been building up a savings hoard that some have suggested will be released in a deluge of spending once the lockdowns end — as everyone heads out dancing and partying like in the Roaring Twenties.

Asked if a rush of spending was likely, Macklem once again explained why, even if it happens, a return to the days of the Great Gatsby is unlikely to unleash inflation. As retail experts explained in early December, those who have money to spend have been saving on services while continuing to spend plenty on goods. And even if we spend more on dancing, services do not lend themselves to a burst of excessive consumption.

WATCH | Bank of Canada predicts wealthier households will hold on to savings: 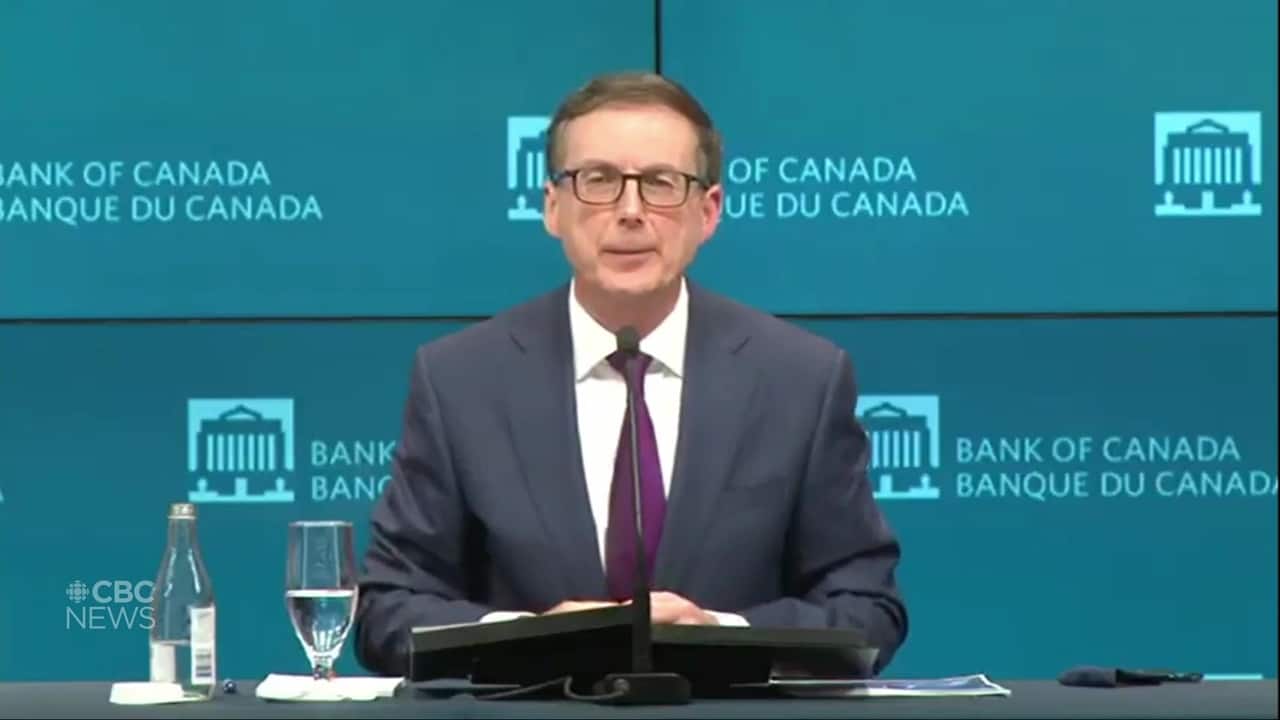 “If you don’t get a haircut,” Macklem said, gesturing to his own longish style, “when you go back to getting haircuts, you don’t get extra haircuts.”

All that said, Macklem was clear to point out that with so many uncertainties, the bank’s outlook is not a foregone conclusion. The economy could recover faster. “That would be a good thing,” he said. A rising loonie, which would allow Canadians to spend more on imported goods and trips abroad, may slow the recovery as Canadian exports get pricier.

And with an unpredictable and evolving virus, things could stay bad for longer, too, in which case the Bank of Canada has tricks up its sleeve, including micro-cuts, to add a little more stimulus if that turns out to be necessary.

Someday the low interest rate party will be over, but for now, Macklem sees the most likely path as a strong if choppy and protracted recovery and continued rock-bottom borrowing costs until 2023 — or until a full recovery happens.

Canada added 378,000 jobs in September, even more than in August