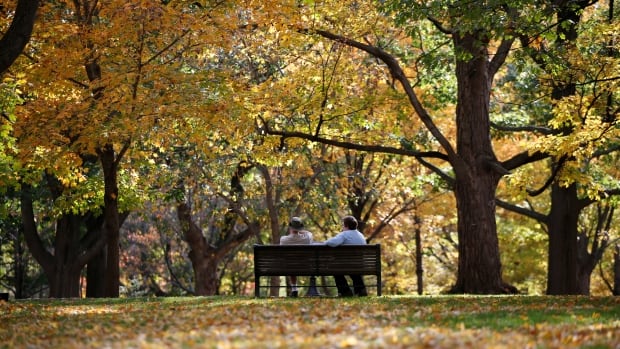 As we huddle in our homes, separated from friends and family by a pernicious virus, economics offers a measure of one thing Canadians have to be thankful for.

Gross domestic product, or GDP for short, a reckoning of things we make and services we sell, tells us Canada is a rich country in a poor world.

Depending on how you calculate it (there are subtle differences in methodology), as of last year, Canada as a whole was about as rich as Brazil or Russia.

But what makes Canadians really, really rich is that unlike Russia and Brazil, Canada’s enormous wealth is shared among a relatively small population. We have a high GDP per capita.

As you sit there this Thanksgiving weekend — grumbling about the politician or irresponsible age group to blame for trapping you in your home on this traditionally convivial holiday — it is easy to conclude that living in a rich country isn’t enough.

That is certainly the conclusion of Bryan Smale, director of the Canadian Index of Wellbeing, a project currently located at Ontario’s University of Waterloo.

As he and his team continue their efforts to find out what Canadians really care about, their research has shown that being rich — under what their system classifies as “living standards” — is only a single one of eight crucial indicators, including health, leisure and community engagement, that are most likely to make us thankful. And for many of those indicators, COVID-19 has not been kind.

“The things that are emerging as being the most significant buffers [for well-being] are the degree to which people can continue their participation in a variety of leisure activities and their perceived access to those things, both of which have been compromised right now,” Smale said.

His research shows that going out into nature or a city park can relieve a sense of social isolation, as can interacting with strangers — even at a distance.

“The other big, big factor is that people still have a sense of community,” Smale said. “That can be small in terms of connecting with neighbours or family nearby, or it can be bigger, just feeling that the community cares about them and that they will support them in times of need, like now.”

Which means this might be a perfectly good time to remind you that we at the CBC care. I care.

The Canadian Index of Wellbeing (CIW) has a difficult task. Collecting credible amounts of data for its eight sub-indexes is expensive. Ambitious early plans for CIW to provide an alternative to GDP to offer frequent data reports that measure the environment, education and democratic engagement still seem far away.

The research group works with regional governments and NGOs to help collect and collate survey data for local use. Engage Nova Scotia has collected local quality-of-life data to show the advantages the province has well beyond its absolute wealth.

Smale and his team are currently examining the results from Yukon’s Community Well-being Survey that sampled data before and during the COVID-19 outbreak that they hope will be revealing.

Another national CIW release to update the index’s previous one in 2016 is coming in the new year.

As a hard-nosed professor of economics at the University of Waterloo who has nothing to do with the CIW project, Mikal Skuterud is quick to leap to the defence of GDP as if critics wanted to get rid of it.

“Saying we should abolish GDP as a measure is ridiculous,” he said. “There is no single measure, surely, that is going to capture everything we care about.”

His point is that GDP is valuable and maybe essential, so long as it is not taken for more than it is. Skuterud insists that the study of economics includes many different indicators, none of which can be taken in isolation.

In the case of COVID-19, for example, while many people may be losing income, economics reminds them they are trading it for the utility of more family time, “and I think maybe that’s a nice message for Thanksgiving.”

A well-known principle called the Easterlin Paradox, discovered by a U.S. economist, shows that after a certain point — somewhere near the official Canadian poverty level — we and the countries we live in don’t get happier as we get richer.

One thing GDP does not do is measure happiness. Despite supporting GDP, Skuterud said it has other flaws.

“The biggest problem is that it ignores the distribution of economic wealth within a population,” he said.

The Canadian Index of Wellbeing is in no position to supersede GDP and has no plans to try, but for people like Lisa Wolff, policy and research director at UNICEF Canada who uses the CIW tools, the effects of wealth distribution are obvious and inescapable.

Right through the pandemic, Wolff’s group has conducted twice-monthly studies called the U-Report, where people between the ages of 13 and 24 are invited to participate.

“What we are seeing is a polarization of experience in COVID where families that were already functioning pretty well are generally managing OK,” she said. Children are experiencing less bullying, feeling less pressure and enjoying family time. But that’s not universal.

“The kids that were already disadvantaged and struggling are bearing the greatest burdens,” she said.

Wolff said she fears that Canadian child and youth welfare, already shown in last month’s UNICEF Report Card to be at the bottom of the ranking among rich countries, will get even worse as the lockdown continues. Going “back to normal” just won’t be enough, she said.

Research from other European countries shows that it is not absolute wealth but a society’s wealth disparity that leads to poor outcomes among the less advantaged, but that could be partly overcome.

If Canada could coax its most disadvantaged youth back into education and employment by increasing child and youth spending to the level of three per cent of GDP of those countries with the best results, it would be money in the bank, Wolff said.

“They’re underemployed, they use social services, they’re sicker throughout their lives, so absolutely, there are savings if we invest in kids.”

Which, if she’s right, would allow you, on a future Thanksgiving, to be thankful for being even richer. It might even make you happy.

Despite early COVID-19 rebates, car insurance rates have risen during pandemic and are set to rise more