Finance Minister AHM Mustafa Kamal has urged the International Finance Corporation (IFC) to develop Bangladesh’s fixed income securities, especially the bond market, side by side providing more support to the private sector being affected by the COVID-19 pandemic.

He also called upon the IFC to enrich the ‘Taka Bond’ as well as reducing its interest rate so that the private sector could make a rebound from the COVID-19 pandemic in the shortest possible time.

Kamal made the call during a virtual meeting between the Bangladesh delegation and the IFC delegation held on October 29 evening as part of the Annual Meetings 2020 of the World Bank and the IMF.

The IFC delegation assured the finance minister of considering his requests.

At the very outset of the meeting, Kamal lauded the role of the IFC in overall development of the country through providing continued support to the private sector.

Mentioning that Bangladesh is very much eager and pledge-bound to ensure the availability of the COVID-19 vaccines for the countrymen once invented as per the desire of the Prime Minister, he sought the due role and support from IFC in this regard.

Noting that the COVID-19 has put the global economy and human lives on the verge of threat, Kamal said Bangladesh is not out of this impact.

He said the country is poised to attain the Sustainable Development Goals (SDGs) by 2030 and to become a higher income country by 2041.

The finance minister also mentioned that the $14.13 billion stimulus packages (4.3% of GDP) announced by Prime Minister Sheikh Hasina for ensuring economic recovery of the country through successfully facing the challenges of the COVID-19 with practical and time befitting steps.

Referring to the launching of $9.5 million ‘Taka Bond’ at the London Stock Exchange with IFC support last year, which was supposed to be raised at $ 1 billion in the next one year, Kamal said this could not flourish to such extent due to the pandemic.

He also hoped that the IFC would take necessary steps to further enrich it.

The Finance Division senior secretary informed the meeting that they are working to reorganize the financial sector alongside capping of the interest rate.

He informed that the Financial Institutions Division has been working to frame some acts like Solvency Act, Bank Company Act and Asset Management Act which would play an important role to restructure the financial sector.

Rouf informed that it would involve a huge amount of fund for ensuring COVID-19 vaccines for all the countrymen while three local pharmaceutical companies are working to develop the vaccines.

He said it is expected that these local companies would be able to manufacture vaccines within six months of invention while it is also not possible to import all the vaccines since Bangladesh is a country with huge population.

“So, we’ll put emphasis on local vaccines and IFC has a scope for lending their support to our local pharmaceutical companies as it will take huge investment for this purpose,” he added.

The meeting also discussed the commitment of $1.6 billion Long Term Financing by IFC to Bangladesh for the 2017-2021 period as well as their committed $1.1 billion to Bangladesh till June, 2020. 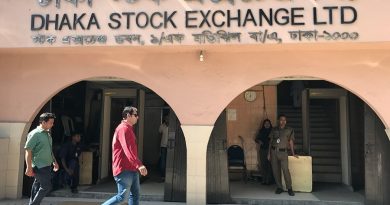