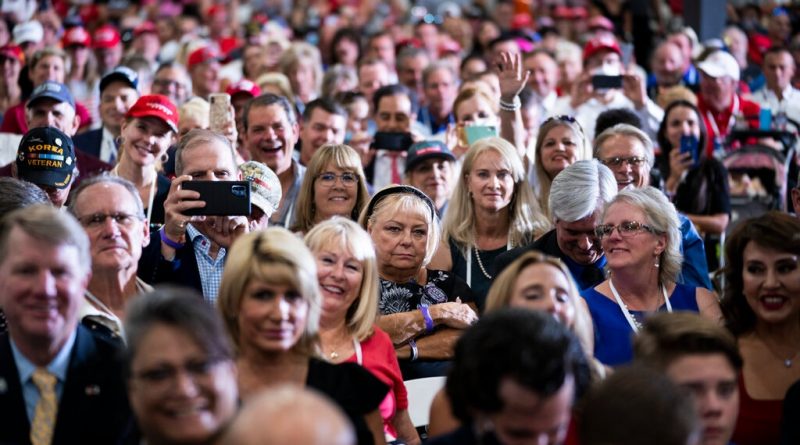 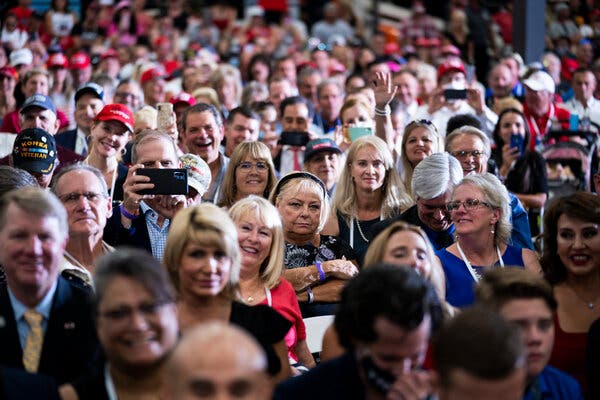 “I’m on a stage, and it’s very far away,” Mr. Trump said of the gathering on Sunday. His own campaign aides privately called the move a game of political Russian roulette.

WASHINGTON — President Trump and his campaign are defending his right to rally indoors, despite the private unease of aides who called it a game of political Russian roulette and growing concern that such gatherings could prolong the coronavirus pandemic.

“I’m on a stage, and it’s very far away,” Mr. Trump said in an interview with The Las Vegas Review-Journal on Monday, after thousands of his supporters gathered on Sunday night inside a manufacturing plant in a Las Vegas suburb, flouting a state directive limiting indoor gatherings to fewer than 50 people.

The president did not address health concerns about the rally attendees, a vast majority of whom did not wear masks or practice any social distancing. When it came to his own safety, he said, “I’m not at all concerned.”

The decision to hold a rally indoors, officials said, was something of a last resort for a campaign that had tried to procure five different outdoor locations. A Trump campaign official said they all faced pressure from state officials not to host the rally.

Xtreme Manufacturing, which finally agreed to host, immediately faced threats from the city of Henderson, Nev. Officials said in a letter made public that the city could charge a fine of $500 for every person over the state’s limit of 50 people and suspend or revoke Xtreme Manufacturing’s business license.

Mr. Trump had been defiant during the rally. “If the governor comes after you, which he shouldn’t be doing, I’ll be with you all the way,” he told the crowd.

Late Monday, the president complained on Twitter about the opposition by Steve Sisolak, Nevada’s Democratic governor, to the indoor rally, incorrectly stating that Mr. Sisolak was in charge of ballots in Nevada (the state’s Republican secretary of state is) and accusing the governor without evidence of planning election fraud. “Rigged Election!” Mr. Trump wrote.

Upcoming Trump rallies in Wisconsin and Minnesota are planned for outdoor airport hangars, the kind of gathering the president recently resumed scheduling with little fanfare but which still violate state guidelines limiting them to fewer than 50 people. But some states like North Carolina, where Mr. Trump held an outdoor rally in Winston-Salem last week, have a First Amendment exemption permitting crowds to gather in the name of freedom of speech. That has led the Trump campaign to distribute signs that read “This is a Peaceful Protest” at its rallies, claiming that attending a rally is an act of political speech.

The campaign had no plans to announce any large-scale events that would take place indoors, an official said.

But more than 100 people, a majority of them not wearing masks, packed into a hotel ballroom in Arizona for an event on Monday that was billed as a modest round table with the president.

Officials said they never considered simply scrapping rallies altogether when their efforts to find an outdoor location failed. For the president, the quiet return of the classic Trumpian political event has been a way to give himself a sense of control during a time when he has little control over events or news cycles. Longtime advisers said they were as important for managing a candidate who needed the cheering crowds to feel energized as they were for energizing the supporters themselves.

Still, the return of the rallies was a reversal for the Trump campaign.

The president told the radio host Hugh Hewitt last month that he did not plan to hold campaign rallies at all because of concerns about the pandemic. “I’d love to do the rallies. We can’t because of the Covid,” Mr. Trump said. “You know, you can’t have people sitting next to each other.”

His critics said the recent rallies in battleground states were more a sign of desperation than of strength. The president is eager to generate news coverage; with 50 days until Election Day, he trails former Vice President Joseph R. Biden Jr., the Democratic candidate, in battleground state polls and his campaign has pulled down ads as its cash advantage has evaporated. Cable channels have cut back on live coverage of Mr. Trump’s rallies, but local affiliates still often carry them in full.

Tim Murtaugh, a campaign spokesman, defended the decision to carry on with an indoor rally in the middle of a pandemic.

“People are eager to see their president, and our first preference for venues are places like airplane hangars,” he said. “But the fact remains that no one bats an eye at people gambling in casinos or tens of thousands of people protesting shoulder to shoulder. People should be able to gather peacefully under the First Amendment to hear from the president of the United States.”

But the decision to forge ahead created a wave of internal backlash, including from a top Trump adviser who said the president was playing a game of Russian roulette in holding the indoor rally. The adviser, who requested anonymity so as not to anger Mr. Trump, said the campaign was taking a cavalier approach to the pandemic that could backfire politically. Some of the president’s most vocal defenders outside of the administration agreed.

“Indoor rallies are irresponsible,” Ari Fleischer, a former White House press secretary for President George W. Bush and a frequent defender of Mr. Trump’s, wrote on Twitter. “Covid-19 is real and this was a bad idea.”

In an interview, Mr. Fleischer said he thought the president would be hurt politically if there were surges of positive cases in Las Vegas. Weeks after a rally in Tulsa, Okla., in June, the last indoor gathering the president convened, the city’s top health official said an increase in coronavirus cases in the area was probably connected to the event. Herman Cain, the former Republican presidential candidate, died of Covid-19 after attending the Tulsa rally, although it was not clear whether he was exposed to the virus there or elsewhere.

At the White House, anyone who comes near the president, including the senior staff, is tested for the virus. Mr. Trump himself is tested daily, if not more often. Most West Wing senior staff members work in the building, but the East Wing staff of Melania Trump, the first lady, largely works from home.

When she travels with the president, Mrs. Trump asks that her own staff and advance team do not travel with her in order to limit their exposure to the virus. She has declined to participate in fund-raising lunches for the campaign, citing her concerns about the pandemic, according to an administration official.

Vice President Mike Pence has also chosen a different approach. On Friday, he wore a face mask as he stood with other dignitaries at ground zero to commemorate the 19th anniversary of the Sept. 11, 2001, attacks.